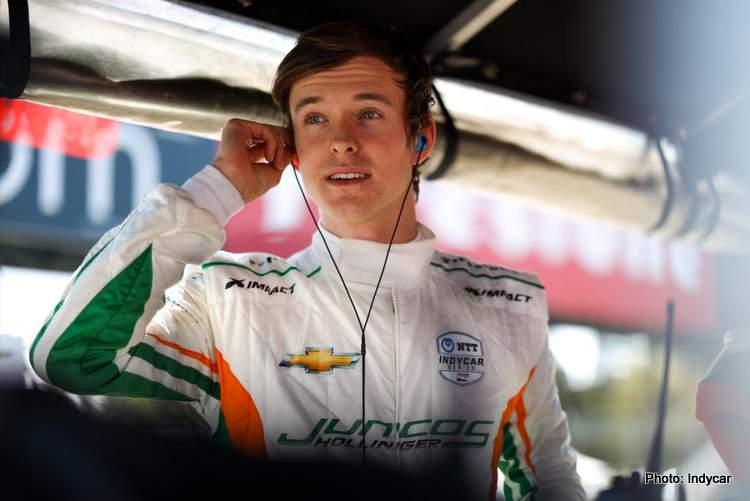 Highly-rated youngster Callum Ilott has opened up about the effect racing accidents can have on professional drivers as he gets to grips with the world of IndyCar, with Formula 1 still very much on his radar.

The Ferrari F1 test driver retired after completing 77 laps of his promising debut for Juncos Hollinger Racing in Portland at the weekend. The early-race collision that damaged his car was minor compared to some that the 22-year-old has experienced throughout his fledgling career.

And the Cambridge-born talent has revealed his strategy for coping with such incidents and the inevitable dangers that come with driving at speeds of 200mph or more.

In a wide-ranging interview with sponsor Adrian Flux, Ilott explained: “A lot of possibilities have to come together and at least nine times out of ten you can get away with a crash and maybe one time you don’t.

“When it’s someone close to you that has an accident there’s obviously emotion attached to it. But it’s all facts and statistics for me. At the end of the day you’re in this sport and you’re in this position. If the stats were a bit higher then I think I would be concerned but at the moment you just hope it doesn’t happen to you. A lot of improvements continue to be made in terms of safety too.

“I wouldn’t say we’re wired differently, racing drivers just know the limits of what we’re in and what we can do a lot more than other people. We’re very aware of the limits of each car we get in. It’s all calculated and you can feel and understand where that is and it automatically enters your brain. My body will say ‘that’s your limit’ and you just know depending on the conditions.”

Whether racing drivers are affected after a crash or seeing a team-mate or rival have an accident remains a deeply personal topic for the Ferrari Academy driver.

The F1 hopeful saw the aftermath of a tragic 2019 collision at Spa during his F2 days which claimed the life of his close friend Anthoine Hubert and seriously injured team-mate Juan Manuel Correa.

Illott added: “To satisfy my own mental state I spent that whole evening and the next day analysing what happened.

“In my mind I completely understood why it happened and it felt easier to accept it. I go through it and piece it together. I’d lost a team-mate and good friend and another was fighting for his life. It was an ongoing process to deal with it.

“You can’t change what happened but he’d (Anthonie) changed me – not because of the accident – but because of how he was, how he influenced people and I took quite a few lessons from him. I took it upon myself to make changes, inspired by him.

“Everyone says ‘you’re doing it (racing) for him’, but I’d rather take the lessons that he gave me as it’s a greater impact than doing it for him. It can happen to anyone and you have to take every chance and moment you get in life, that was one of the lessons I took. It helped change my values and understanding of some things.”

The 2020 F2 runner-up will feature in the final two races of the IndyCar season, the first of which takes place at Laguna Seca this weekend. (Report by Adrian Flux)