Horner: We’re witnessing one of the great sporting rivalries 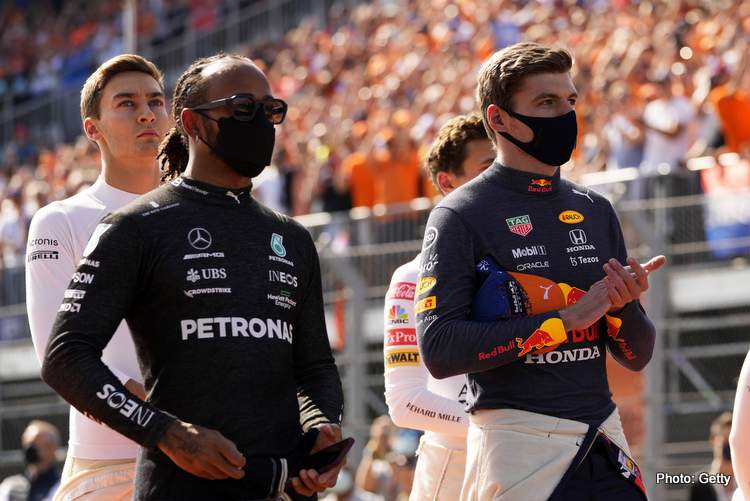 Red Bull and Mercedes were left licking their wounds after their drivers Max Verstappen and Lewis Hamilton collided out of the 2021 Italian Grand Prix, with team boss Christian Horner reflecting on a dramatic weekend at Monza.

While the title contenders grabbed all the headlines, their respective wingmen Valtteri Bottas and Sergio Perez provided damage limitation with the Mercedes driver third and the Red Bull man fifth.

After Monza, the score is; Red Bull on 344.5 points trailing Mercedes who are on 362.5, while Max leads Lewis by five in the driver’s standings.

Sunday also marked the last race of a gruelling, post-summer break, triple-header and a welcome, albeit brief weekend hiatus for the Formula 1 circus before tent is set up at Sochi for Round 15 next weekend.

Before that Horner wrote in his latest column: “We’re witnessing one of the great sporting rivalries, not just within Formula 1, but within the sporting world for a generation. It’s intense and the stakes are high. It’s hugely competitive and nothing is being given up without a fight by either side.

“Also from our perspective, it’s hugely enjoyable to be back in a competitive position fighting for a world championship. After all, when was the last time a Mercedes car was not leading the championship at this stage of the year?

“Since the summer break, Max has been in great form. His pole lap at Spa, in difficult conditions, was phenomenal and gained us the points there. His performance under immense pressure in Holland and all the expectations placed on his shoulders was incredible.

“And in Monza, the way we worked as a team to get third place on the grid in qualifying and his drive in the sprint qualifying, which got him second place that in turn became pole for the race, all while securing vital championship points, was very impressive.

“As for the race itself, we knew McLaren would be a big opponent in Italy because their cars are well-suited to that venue. Daniel Ricciardo made a good start and Max pushed him as hard as he could, but we couldn’t overtake.”

Before the pitstops Verstappen had a dozen or so seconds lead on Hamilton who had been chasing all afternoon after a clumsy start and first lap. What should have been a typically swift RBR Pitstop turned into an 11 seconds eternity, which ultimately resulted in the blue car ending side-by-side with the black car as they feuded for the same piece of tarmac at the first Variante.

Horner acknowledged the mistake: “Then there was a rare human error in our pit stop, as a result of the new Technical Directive but nonetheless something we need to learn from.

“That slow stop put Max out of synch from where he should’ve been on track. Mercedes compounded that situation as they faltered with their own stop on Hamilton’s car, which meant both drivers were neck and neck.

“Both drivers knew they needed to be ahead because of the difficulty to overtake. Max was keen to seize the momentum and Lewis was eager to retain track position.

“It was an awkward shunt, but both drivers were instantly able to confirm they were ok. With Lewis trying to reverse and get back in the race, even the medical car didn’t see the need to deploy. I’m grateful the halo did its job. I think even the most vocal of doubters have now changed their mind about it.

“I still share the same belief today – both played a part in it and it is difficult to apportion blame to one side more than the other. If the FIA wanted to make a statement, they could’ve imposed the same penalty on both drivers.

“But the fault was deemed to be more on Max’s side and, because he didn’t finish the race, the only option was to give him a grid penalty, which we accept,” concluded Horner.