Coulthard: Too many young drivers arrive on a magic carpet ride 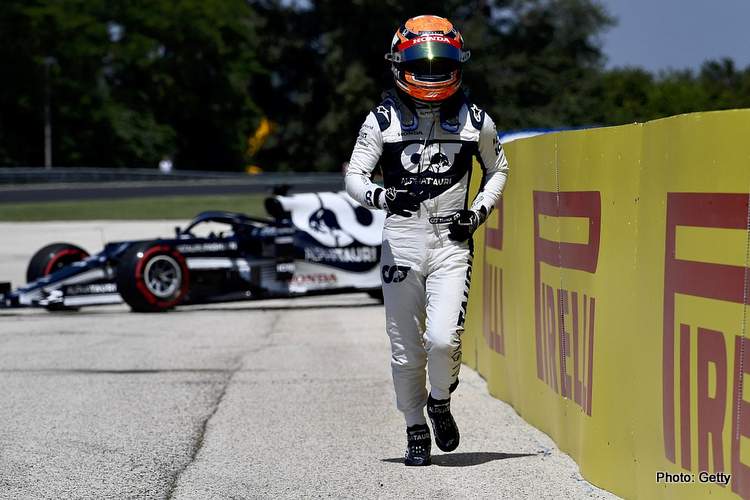 David Coulthard has taken a hefty swing at popular rookie Yuki Tsunoda, the Scot suggesting too many young drivers have a magic carpet ride into Formula 1.

Tsunoda burst onto the scene with a sparkling performance at the season-opening race in Bahrain, but since then his shares have nosedived as have his performances.

Crashing often, and simply no match for Pierre Gasly in the other AlphaTauri, the Japanese driver has nevertheless done enough to warrant another year from his once ruthless employer.

His feisty demeanour and expletive-laden messages when he makes mistakes (and there are many of them) has made him a fan favourite in a cuddly toy way. The mascot you roll out when a laugh is needed.

SJ: Does Tsunoda make your senses tickle, do you think this kid has got it?

DC: He has not made any eye contact with me at any point and I’ve literally got to the point where I’m doing star jumps in front of him as he walks down the paddock it’s like we don’t exist.

SJ: It’s a bit overwhelming for him you know, it’s bigger than he was expecting. I actually interviewed him a couple of days back and he is unlike any driver I’ve ever met. I asked him what he’s enjoying about F1
the most and he said, “the catering” which blew my mind. He said in his day-to-day life he wasn’t really into cars, if someone was to ask him how much horsepower an F1 car has he’d reply, “what’s horsepower?” For anybody who’s listening in, come on, that’s great that’s a lot of fun right there…

DC: Well yeah, if you’re doing stand up comedy. He’s a Grand Prix driver! The reason I no longer race is because I can’t take life seriously which is why I talk so much bollocks [laughing] but when I was racing it was the single most important thing to me. So you know I just don’t get that.
A lot of the younger guys now that are coming in so young was with a magic carpet ride that they haven’t actually had time to take stock of how fortunate they are now.
Max coming into F1 at 17 but you know Jos was no cuddly, kissy daddy bringing him up through the ranks.
Jos was a hard taskmaster who had him out in horrible conditions on slick tires and all the rest of it you know. Grooming him to be tough and resilient, to understand that you get one shot and you’re going to make the most of it.
I just worry that some of the younger drivers arrive on a magic carpet of ‘you’re wonderful, we’ll make everything proper and special and cuddly for you’ and they come with physios and they come with their own private jets. Whatever happened to sleeping on sofas? And the back of vans, helping
the mechanics strip and clean your car? A lot of young people are asking what should I be doing I said: live with your team for a few months.
To become part of your team it’s not turning up and going ‘hey guys how are you, hey thank you so
much’ it is about living with them, it’s being with them. You can say maybe it’s an old-fashioned view but I’m saying the same thing to our 12-year-old son, you’ve got to understand what it’s like to do an all-nighter, and I’m not talking about the party sense, I’m talking about rebuilding a car when you’ve crashed it, you spend all night with your guys. That’ll focus your mind and not doing it again.

Late last year, Tsunoda was a surprise call-up to AlphaTauri under orders of Red Bull, whose young driver programme is ruled over by Dr Helmut Marko.

His racing CV at that point was hardly earth-shattering. After winning the Japanese F4 Japanese in his second attempt, Tsunoda progressed to the 2019 FIA F3 Championship, ending the year ninth. Robert Shwartzman was Champion that year.

In 2020 Tsunoda finished third in the F2 Championship won by fellow rookie Mick Schumacher which Marko believed was enough for a promotion to the F1 grid this year.

The shortest and youngest driver in F1 has won the hearts and minds of many, but the novelty factor is wearing thin with Coulthard’s strong criticism the first from a senior ex-F1 driver and respected pundit, as well as Red Bull ambassador.

Meanwhile, credit to the 21-year-old acknowledging his luck to be retained beyond 2021 by his team: “The first half of the season was quite inconsistent, so also from my side I was a bit surprised I’ll be staying for next year because I just keep crashing and spend lots of money for the team.”