Inside Line: Hamilton and British cabal are out of line 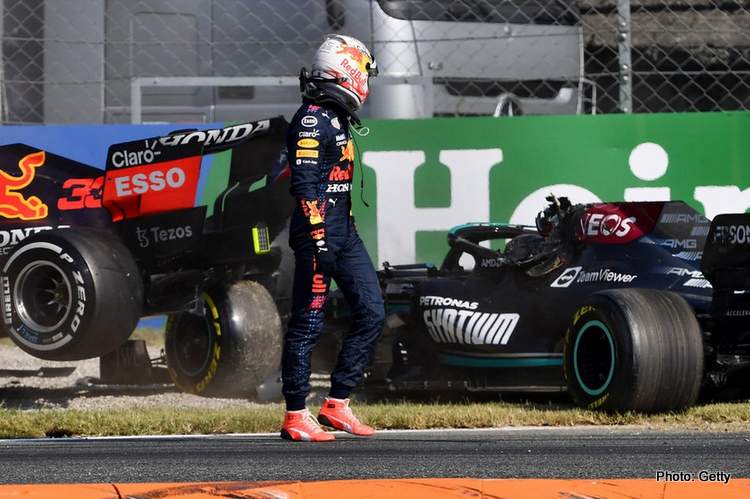 Max Verstappen is copping far too much flack from British drivers, pundits, and media in the aftermath of the collision with Lewis Hamilton, that ended both their 2021 Italian Grand Prix in the Monza sand.

Granted Verstappen should have known a whole lot better, that the first Variante is a one-ideal-line contraption of tarmac and seldom do two cars – in any formula or series – go through it side by side without tears.

The move was never on, after all Hamilton himself had set the rules of engagement on the opening lap when he tried a no-go move on the Red Bull driver as they hurtled into the first Variante. Max on the inside sailed through with Lewis hung out to dry on the outside having to go over those nasty humps on the inside of the chicane.

The message was loud and clear from the Champ: If there is a gap I am going for it. So when he peeled out of the pits with Verstappen large in his left mirror he should have expected the same treatment. Although it would be fair to say he was ahead, and the corner was his when they collided.

Although relatively slow, it was a nasty incident as Max’s Red Bull bounced off the curb, got airborne, ran over the Mercedes as they speared into the sand – Verstappen’s car on top of Hamilton’s.

Stewards declared it a Max mistake, and he has a three grid penalty for Sochi. Fair enough, he should take it on the chin and put it down to experience.

But things got nasty first with Damon Hill (who would know a lot better) accusing Max of deliberately causing the crash, which is absurd, but shows the extent of the bias in reporting from the track and news outlets that serve as the voice of the anglicized Formula 1 of today.

The latest Brit to jump in is Sir Jackie Stewart, who seldom has a good thing to say about Lewis (and lambasted him the loudest for moving from McLaren to Mercedes) told Sportsmail: “Verstappen is taking longer than expected to mature.

“Not even to go to see Hamilton after a serious accident when you have just driven over the top of the guy is something I don’t really understand. Especially when he is still in his car and remained there for a long time before getting out,” bemoaned Stewart, who again got it wrong. Lewis was clearly fine and trying to reverse to rejoin the race!

This of course triggered and exacerbated by Lewis on the attack, disinforming his tens of millions of social media followers to further fuel the rivalry: “I saw Max get out and walk by and I found that surprising. As drivers, when we do have incidents, we normally want to make sure the other guy is okay. But the good thing is I was able to get out. We live to fight another day,” added Lewis.

But this is the rewriting of what actually happened and is tantamount to defamation because the facts are: long before Max was out of his Red Bull, he was aware Lewis was moving around and clearly in no rush to get out of the car, but rather tried to reverse out of the mangled heap.

From our armchairs it was clear, the Merc driver was not harmed in a way that would demand attention from anyone, trying to drive out of the sandpit and climbing out unscathed later was evidence of that.

So Max, with this knowledge evident to him and all watching the saga, did what most racers would do: walked away from the incident. No matter what Lewis and new pal Sir Jackie think, there is nothing to it there. No story. Move on.

Lucky for Lewis it wasn’t George Russell who might have rushed over and bopped him one on the head not caring if he was injured or not, as he did with Valtteri Bottas at Imola earlier this year. How quickly that rotten incident was forgotten!

Furthermore, it should be remembered that Lewis himself showed scant regard at Silverstone during the British Grand Prix in July, celebrating a controversial victory while Max was in hospital.

Granted, Brit tabloids and media are entitled to their patriotic rants and tribal loyalism, as it is their right to report from such a lopsided perch.

But please save us from the glaring prejudice – by some – on the global English feed.

While logistically it makes sense for F1 to depend on Sky F1 for the global worldwide English feed and on F1 TV, they must set rules of engagement for media and pundits. With exceptions, of course, this constant favouritism towards British drivers, their overexposure at the expense of other non-Brits, is becoming increasingly intolerable for neutrals with no alternative commentary to tune in to.

With this in mind, to 36-year-old Lewis, the big fan that I am and will always be, I say shame on him for inciting his fans, against Max, after their Italian Grand Prix shunt, with a self-serving post, intended to make his 23-year-old rival out to be the ‘bad guy’, the villain, the careless killer. That was the message to me between the lines, it’s subliminal but it’s there.

The truth is they are both ‘bad guys’ otherwise they would not be great race drivers. It comes with the territory, it is how they are wired, in the DNA. But, this post-race attack was a nasty low blow from the Champ, which only serves to further tribalize this contest, conflict, war, battle, call it what you want.

As a long-standing Lewis fan past present and future, I find this reaction out of character, not expected of an incredible race driver oozing peace, love, diversity and goodwill that so impresses me and millions of his fans.

Instead, it reminds us that despite seven titles and 99 wins – hidden away by serial winning with the best car in F1  – he remains a bad loser with a nasty streak.

In other words, he is a mere mortal just like all of us. This is a shame, as I thought he was more than that.