How to stop Lewis and Max crashing into each other? 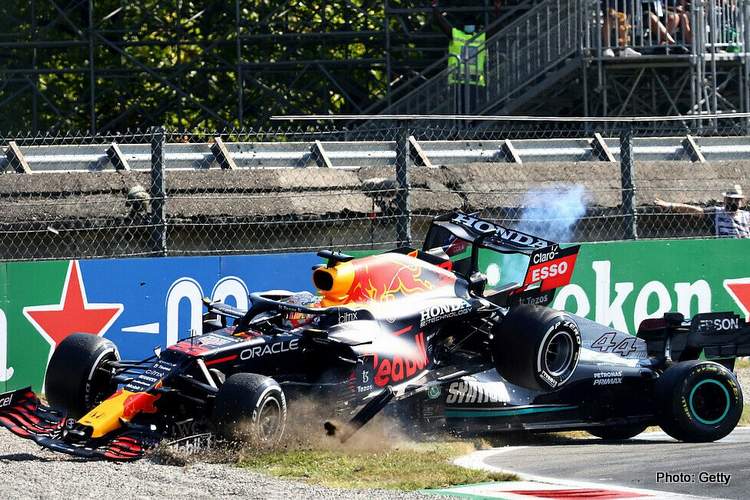 Two of Formula 1‘s best drivers – Lewis Hamilton and Max Verstappen – have been involved in two potentially life-threatening crashes in as many months. Something needs to change.

At the British Grand Prix in July, Max ended up in the hospital after tangling with Lewis on the first lap. At the Italian Grand Prix on Sunday, Hamilton was only able to escape relatively unscathed from another incident between the two title rivals because of the protective halo device.

Mercedes team principal Toto Wolff said: “The halo definitely saved Lewis’ life today. It would have been a horrible accident that I don’t even want to think about if we wouldn’t have had the halo.

“How many accidents do we want to see in the future in order to stop one guy winning. It’s very intense and maybe we can find some framework in which we can operate.”

The incident happened midway through the race at the Temple of Speed as Hamilton exited the pit lane just ahead of Verstappen, who attempted to squeeze past him at a chicane but ran off the track.

Verstappen was sent out of control and airborne into his rival’s path, with the rear-right wheel landing on top of Hamilton’s Mercedes halo, sending them both into the gravel and out of the race.

“We have seen these duels in the past and it’s between drivers that are very good, that are racing for a world championship. I think the modus operandi for the future is that tactical fouls in order to make sure that the other guy doesn’t win is something which you need to get under control. How I have no idea,” added Wolff.

Verstappen maintained his championship lead, which he had slightly extended to five points by coming second in the sprint on Saturday.

After speaking to both drivers, the stewards decided that Verstappen “was predominantly to blame for the collision” and gave the Red Bull driver a three-place grid drop for the start of the next race, the Russian Grand Prix on 26 September.

“I’m proud of the stewards,” Hamilton said immediately after learning of their decision. “I need some time to really reflect on it but I think it definitely sets a precedent and I think it’s important for us moving forwards, for the safety of the drivers that there are strict rules set in place.”

Hamilton had said before the decision was announced that something needed to change in order to avoid similar incidents – with potentially graver consequences – in the future.

“There is a point in which you have to concede, go across the run-off, and I am not sure why Max didn’t. This will continue, but we have to learn from our scenarios on track. I don’t have a history of these incidents and when you get away with things, you just continue to do it.

“We do need to look into this so the right decisions are being made. Nobody wants to see anyone get injured. If we put better protocols in maybe we can avoid this sort of stuff in the future,” added the seven time F1 World Champion.

Red Bull team principal Christian Horner described the crash as a 50-50 accident and Verstappen said Hamilton kept “squeezing” him and pushed him onto the kerb: “I was there to try and race hard but fair.

“I don’t fully agree with the penalty as I believe it was a racing incident. It’s very unfortunate what happened today but we are both professionals and so we will move on,” added the Dutch ace.

It is a similar post-race situation to Silverstone when Horner implied that Hamilton had put Verstappen in the hospital because of dangerous driving. They clashed on the first lap of the British Grand Prix in what Red Bull called a “desperate” move by Hamilton that saw him given a 10-second penalty.

“We don’t want to have situations in the future where one loses the position and the only way of stopping the race, of stopping the other one scoring, is just by taking him out. So both of them need to leave space for each other, race each other hard but avoid accidents,” said Wolff.

For that to happen, Hamilton and Verstappen will need to establish workable rules of engagement, however, history shows that such agreements are oft broken and seldom lasting.

But then, one could argue: that’s racing, so let them race and if they crash so be it, maybe Valtteri Bottas ends up world champ! (With Agency input)