Brown: One of the best deals I cut! 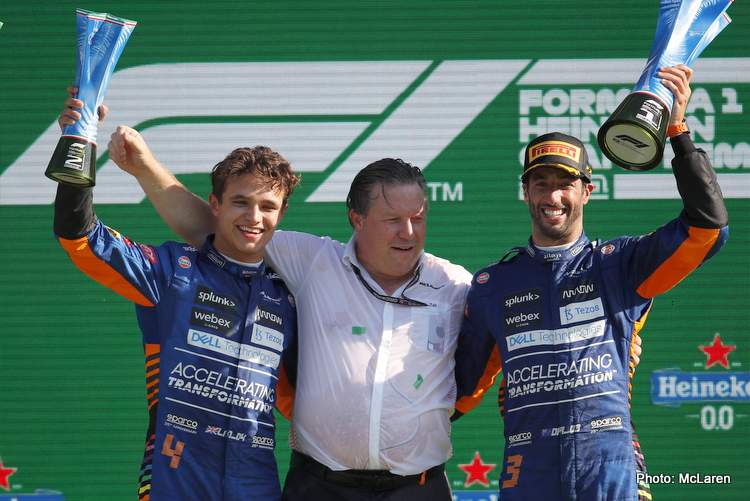 If anyone deserved to be on the podium after the 2021 Italian Grand Prix; it is Zak Brown, the McLaren team boss celebrating a famous one-two victory for his team at Monza, their first victory in nine years.

For McLaren fans and neutrals on Sunday, papaya was the colour that shocked the establishment as Ricciardo powered to the team’s 183rd grand prix victory – only Ferrari have more with 238 wins – marking a welcome return to the victory circle.

On November 21, 2016, Brown was put in charge of McLaren, a ‘supertanker’ of an F1 team that had lost its way while transitioning from the Ron Dennis era to the modern world with the American marketing guru in charge.

At first, as he took over a team enduring their worst spell, Brown seemed lost at sea but indulging Fernando Alonso’s whims and fantasies which were leading the team nowhere, before Zak shrewdly scooped Andreas Seidl from the Porsche WEC programme and put him in charge of the F1 team. From then on the improvement has been steadily upwards.

With Monza the first big reward for Brown’s vision and master plan, it is no surprise that no one could be happier on Sunday, and rightfully so.

The first team to score a 1-2 this season 🥇🥈🥳#ItalianGP 🇮🇹 @McLarenF1 pic.twitter.com/ZHzFLEIHUB

Zak said at the end of one of his greatest days, also eager to share the love: “Yes, I mean, extremely, extremely proud.

“It’s all the men and women at McLaren, Andreas… our leadership team, and I’m just happy I cut one deal with Andreas – I cut deals with the drivers – but Andreas and I actually cut the deal, which is that he gets all the work and gets the win, but I get to lift the trophy. One of the best deals I cut! I’m always up for a deal.

“Andreas is always very very calm, which is great, I mean that’s the kind of leadership you want in the Formula 1 team, as he says one win and last weekend wasn’t very good so I think we have to keep our feet on the ground. And one win at a time,” added Brown.

Seidl was more than pleased but at the same time knows there is still much to do for days like this to be a regular occurrence for the Woking outfit: “First of all, I’m just happy and proud of the team today. I’m very proud of every single member of the team back home, here at the track, colleagues at Mercedes and Lando and Daniel.

“And there was a lot of pressure today because we knew that we had a good car and we knew also that if we managed to stay ahead of one or the other car at the beginning or managed to overtake that there’s actually a chance to do something big.

“The team is doing sensational work with sensational spirit as well, and it’s great to see that it’s step-by-step paying off. At the same time, no reason to get carried away; it’s important to celebrate today but shouldn’t forget one week ago we got destroyed. We still have a lot of work to do, but the direction is the right one,” beamed the German.

Outscoring Ferrari on their home turf on Sunday means that McLaren move from fourth in the 2021 F1 world championship (before Italy) to third with a 13.5 points lead over the Reds, after 14 Rounds.

Listen to the full radio as @danielricciardo crosses the line to take his first win in 3 years!#ItalianGP 🇮🇹 #F1 https://t.co/PU41woFIN4