Verstappen: I don’t know why he kept pushing wider and wider 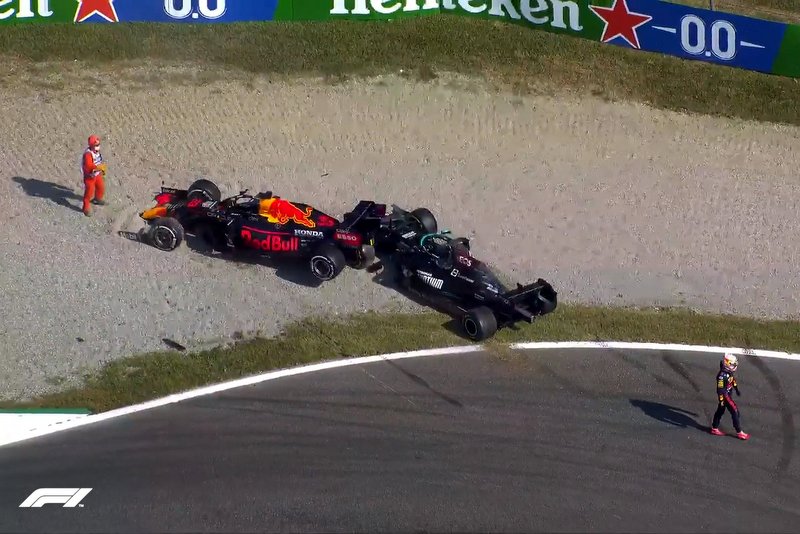 Max Verstappen said that Lewis Hamilton pushing him wide into Turn 1 was the cause of the collision that led to both drivers retiring from the Italian Grand Prix.

After a frustrating first stint for both drivers stuck behind a McLaren, the two headed into Turn 1 wheel to wheel after Hamilton exited the pits, only for them to make contact in dramatic fashion.

The Red Bull of Verstappen ended up on top of Hamilton’s Mercedes, a scary incident, with both drivers forced to retire as a result.

It was the second highly dramatic crash between the two drivers this season, who are now separated by just five points in the drivers’ championship.

“We knew it would be tight,” Verstappen said. “I went around the outside and he kept on squeezing me.

“I just wanted to race. People will start to talk about Silverstone but I didn’t expect him to keep on squeezing and squeezing because we still would’ve had a car’s width out of turn two.

“I don’t know why he kept pushing wider and wider. You need two people to work together to make the corner work but unfortunately, we touched. If one guy is not willing to work, it is not going to happen.

“It’s very unfortunate what happened today but I think we our professional enough to step over it. I think for sure we can talk about it,” Verstappen concluded.