Hamilton: Exactly the same scenario that happened at Turn 4 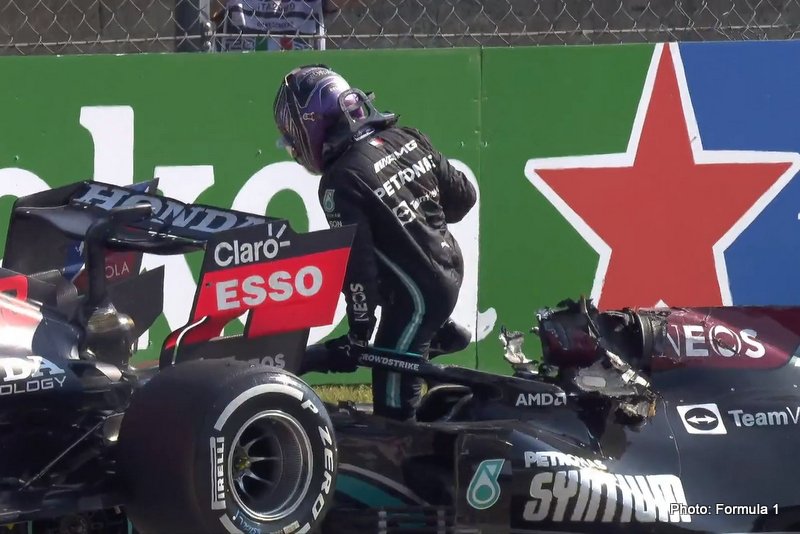 Lewis Hamilton feels that Max Verstappen should have backed out of the move that saw the two title rivals clash at the Italian Grand Prix.

Both drivers retired after a lap 26 collision that left Verstappen’s Red Bull on top of Hamilton’s Mercedes; another critical moment in a title battle that has twisted and turned all year.

The two nearly came together on the opening lap when the Mercedes man looked to pass Verstappen into Turn 4, with Hamilton losing out on that occasion.

However, the next time they were together on track neither driver wanted to back out, and as a result both lost out on a chance for a race victory.

“I’m a little bit stiff and sore on my neck because it landed on my head but I’ll be OK,” Hamilton said when asked how he was feeling.

Speaking on the incident, he added: “The stop was slow and I lost a couple of seconds – I came out, saw Norris come past, Max was coming and I made sure to leave a car’s width on the outside.

“I was ahead into Turn 1, turned into turn two and then Max was on top of me.

“It’s exactly the same scenario that happened at Turn 4 where I was in the same position as Max and I gave way, that’s racing – this time he didn’t want to give way.

“He knew what was going to happen as soon as he went over the kerb but he didn’t back out – I don’t know what else to say,” Hamilton concluded.