Ricciardo: It’s good to be back. Full attack! 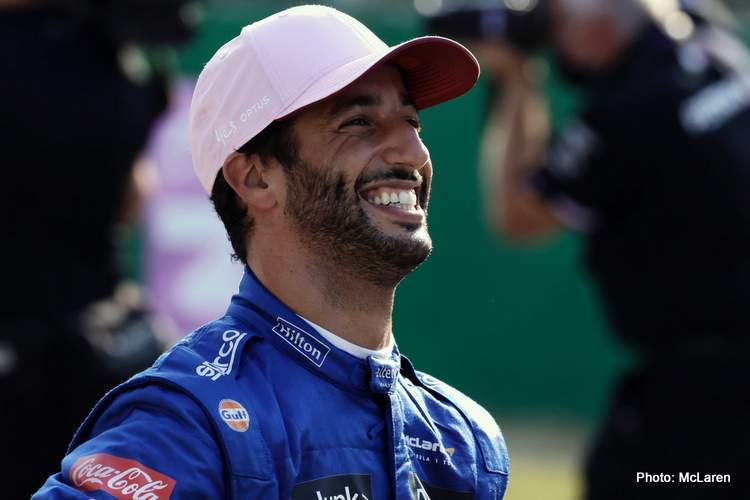 The biggest smile in Formula 1 history is back! A beaming Daniel Ricciardo savoured finishing third in the 2021 Italian Grand Prix Sprint Race today, earning him a front-row start for the race at Monza on Sunday.

It is fair to say that before the summer break Ricciardo was on the ropes, his form had nosedived as he adjusted to his new team and Mercedes power, but the McLaren driver came back from the holidays recharged, and today he rewarded his team.

McLaren gambled with the soft Pirelli red band tyres while around them, their rivals opted to bolt-on mediums for the 18 lap race.

It worked for Ricciardo and teammate Lando Norris, who were both quick out of the blocks, getting by Hamilton and holding station until the end with RIC in third and NOR in fourth behind Sprint winner Valtteri Bottas.

But the Mercedes driver will start from the back of the grid due to engine penalties, popping Danial onto the front row beside Max Verstappen, who inherits pole, and Norris lining up behind the Red Bull in third.

The biggest smile in F1 was back as Ricciardo savoured a return to the form that makes him such a formidable driver; he said in the team report: “It’s really nice to be up there. We had a good start, that was important, but I knew we could. Our starts have been great all year, so we had the potential.

“I tried to get Max in Turn One. I had a really good run – I was able to brake quite late, but he also had a decent run into the turn, so I tried to hang on the outside and then I could see that I was running out of room, so I had to come out of it. I think that’s where I got hit from behind.

“That’s just one of those situations but obviously, I’m sorry for Pierre [Gasly]. It was nice to gain a couple of positions, and then we settled into a rhythm. I didn’t have the pace to keep Valtteri [Bottas] and Max in sight, but at least I was pulling away from the others.

“It was a lonely but happy third and a front row tomorrow. It’s not done yet, but it will be,” added the big smiling Aussie.

Norris who will line up top of the second row, said of his afternoon: “Good sprint quali from us as a team. First of all, I think it was a good decision to start on the Soft tyre – it worked well for both Daniel and myself.

“We both gain a position tomorrow, and Daniel got a point too, so that’s great for the team. I think it sets us up even better than we were expecting for the race. So, a positive day.

“I think the race pace is good as well, and we can look forward to hopefully some more points tomorrow,” added Norris.

Team boss Andreas Seidl added: “Sprint qualifying today went to plan. Both drivers were able to use the Soft tyres to their advantage off the start-line and move up a place on the run to the first corner.

“After that they both drove a very controlled stint, to present us with excellent starting positions of P2 and P3 for tomorrow’s race, our best position on the grid since 2012. Daniel scored a point today, which is a nice addition, but the big points are distributed tomorrow.

“Maximum focus is now on preparing for the race, where we should have a strong car. My thanks to the whole team and our colleagues at HPP. They have all worked very hard this week and put the car in a very competitive window. We’re looking forward to an exciting Italian Grand Prix.” added Seidl.

McLaren are fourth in the 2021 F1 constructors’ championship standings, 11.5 points behind Ferrari ahead of Sunday 14th round at the Temple of Speed, but if things go to plan on Sunday that could well change in favour of the resurgent Woking outfit.

DANIEL: “It’s been a long time to wait to be in this position. It’s good to be back!”#ItalianGP 🇮🇹 #F1Sprint pic.twitter.com/SJGgqVt2Fr