Verstappen: It’s the first medal of my life! 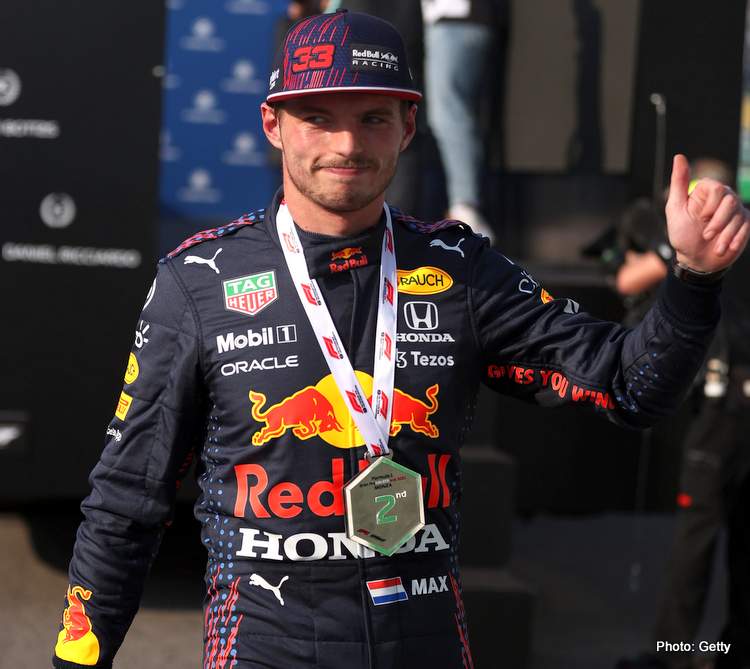 Max Verstappen was happy to settle for second place in the 2021 Italian Grand Prix Sprint Race, the Red Bull driver knowing that winner Valtteri Bottas will start Sunday’s race at Monza from the back of the grid.

From the moment the lights went out to start the race, Bottas scurried off into the distance, with Verstappen chasing after getting by title rival Lewis Hamilton in the drag race off the start line. The Mercedes driver was sluggish into Turn 1, and dropped several places in the process.

At the sharp end, Bottas led with Verstappen in pursuit, the Dutch driver content to hold station, minimise risks and keep the impasse as only a single point was at stake.

He already had two in the bag and Hamilton none, which meant this afternoon’s folly at the Temple of Speed sees the Red Bull driver extend his championship points from three to five.

The medal Max received for his efforts today might have the number two on it, but on Sunday he will start from the number one spot on the grid

After the Sprint, Verstappen said in parc ferme: “It’s the first medal of my life! It’s amazing to be here and see all the Italian fans, they are so passionate.

“The race was better than expected, we scored some nice little points. It is going to be an interesting race tomorrow. We did trim our car to have decent top speed but we also know Mercedes have good speed over the whole lap.”

In the Red Bull report, Max continued: “To be on pole at a track like this is a real positive for us, we had a good start and the race went better than expected. We scored a few championship points and it’s great to be starting at the front tomorrow.

“I was giving it my all to keep close to Valtteri today, but I still expect a tough race as Lewis is starting in P4 and they have a bit more pace than us, we know we are slower than the Mercedes here.

“I’m hoping for another clean start tomorrow so I can create a bit of a gap at the beginning because I will definitely need it later in the race. It’s going to be an interesting battle and we’ll see what happens, we’ll keep pushing and try to make the most out of it,” added Verstappen.

Sergio Perez struggled to match his teammate, the Mexican short on muscle in qualifying, also endured a painful Sprint race, finishing ninth after dropping down the order due to a bad start and had to play catch up at a track where overtaking is very difficult.

But the Mexican veteran saw the positives in the team report: “I think we have a good chance in the race tomorrow, we start P8 and there should be more opportunities to come through the field with our strategy.

“I was hoping to gain a few more places, but my start wasn’t ideal and it was pretty hard to pass. We need to work hard tonight to find some more pace, but I am looking forward to it,” added Perez.

Red Bull team boss Christian Horner had his say: “We are grateful to take the points today and the pole position. It’s the first time we will start from pole here in the turbo-hybrid era and it will be important to retain that position through the first lap, as Monza is renowned for incidents at the first corner.

“We expect it to be a tough race. Sergio was the only driver who made an overtake after the safety car in that race, so he’ll make more progress tomorrow. It’s going to be a fascinating race and there will be a lot of debate about tyre choice for the start, is it a one-stop, is it a two-stop, the strategy guys are going to earn their money tonight.

“McLaren are a factor tomorrow and we cannot underestimate them, they are quick and their car is very efficient. We’ve got to get our heads down, focus on our own race and make sure that we get a clean start to make the most of this grid position,” added Horner.

Red Bull are better placed than their Mercedes rivals for the race, with Max starting from pole and Checo from eighth, while rivals Mercedes have Lewis Hamilton in fourth and Bottas starting from the back.

Ahead of Sunday’s Round 14 of the 2021 F1 World Championship, Red Bull trail Mercedes by 13 points.