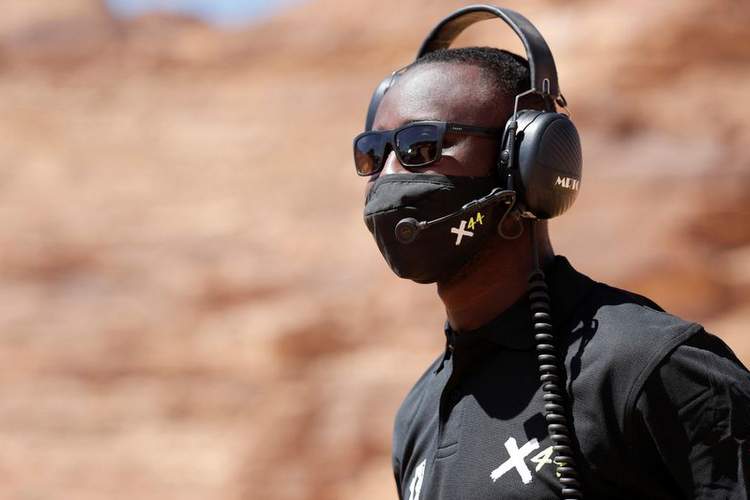 George Imafidon has gone from a boyhood passion for fixing bicycles in his mum’s back garden to working with Lewis Hamilton and Sebastien Loeb, two of motorsport’s greatest world champions.

His journey has taken him from Peckham, one of South London’s most racially diverse areas, to the Saudi Arabian deserts, the Atlantic shores of Senegal and glaciers of Greenland.

That is some success story for any 24-year-old but Imafidon stands out also for what he represents as well as what he has achieved.

The Briton is the youngest member of a commission set up by seven-time Formula 1 world champion Hamilton to increase diversity in motorsport.

He is the only black engineer in the all-electric off-road Extreme E series, where he supports nine times world rally champion Loeb and female Dakar racer Cristina Gutierrez at Hamilton’s X44 team.

“Lewis is constantly inspiring me to do more. It’s been amazing to learn from him,” Imafidon, a co-founder of the Motivez app and social enterprise that connects young people to career opportunities, told Reuters.

Imafidon, whose ultimate dream is to work in F1, embodies Hamilton’s push for change and is an example of the sort of talent the sport has missed in the past.

While he stands out, he knows he is not alone.

“There are hundreds of Georges out there that are ambitious, resourceful and have had many different experiences that have given them the drive, but they don’t necessarily have as much access or they don’t feel they belong,” he said.

“So they don’t decide to go in for these careers. Or when they do go for them, they’re not seen in the right ways in order to give them opportunity. It’s a pipeline issue more than anything.”

Imafidon, who got a first in engineering from London’s prestigious UCL, applied to F1 teams while doing his degree. Williams replied, others never did.

Among the barriers highlighted by the Hamilton Commission were teams limiting hiring to select universities and a feeling among Black students that motorsport was not for them because there was nobody there like them.

The report, led by the Royal Academy of Engineering, estimated only 1% of 40,000 people working in the UK motorsport sector was Black.

Imafidon, who joined a Formula Student team to build a race car at university, had no family background in motorsport or engineering but was mentored through school with assistance from the Amos Bursary, an organisation supporting youngsters of African and Caribbean heritage.

He said many young Black engineers had to temper ambition with realism: “There’s not too many people who look like you who want to apply. Some people are not applying and in other areas someone like me is going for the opportunity and for some reason not getting in.”

That might be because teams want specialist qualifications, he said, while students from under-privileged backgrounds were loath to spend on getting them without any guarantee of a job.

“A lot of young people from under-represented groups feel like they need to do so many things, they need to add a lot of tools to their toolbox in order to thrive,” he said. “It’s a luxury to just focus on one thing.”

Imafidon, who interned at Google and had a placement at Rolls Royce, said Black engineers often ended up going into other industries because they were more accessible.

That has changed, with a growing awareness across the sport that the problem needed to be fixed.

F1 recently announced scholarships for 10 people from under-represented groups and Hamilton’s Mercedes team have their own initiative.

“I think we’re at the beginning of everything. Until we achieve that goal I’m not going to stop,” said Imafidon, who wanted his own example to become the norm rather than an exception.

“I’m going to work at grassroots level, employer level, governance level to make sure we can change things because I think there’s so many more eight-year-old Georges out there that are just dying for an opportunity and they don’t see a pathway.

“If we can de-mystify that pathway, make it more accessible I think we’re on to something. I’m excited,” declared Imafidon. (Reporting by Alan Baldwin)