Hamilton: It should be an easy win for them 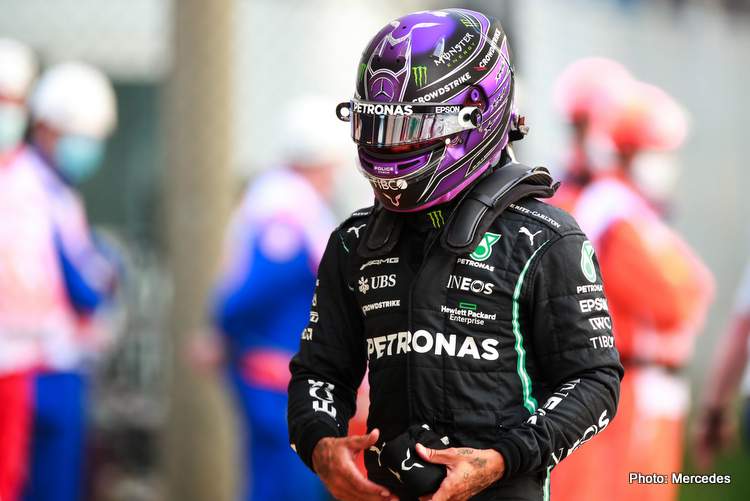 Of the top guns, Lewis Hamilton was the biggest loser in the 2021 Italian Grand Prix Sprint Race on Saturday, the Mercedes driver started on the front row, but compromised his race with a clumsy start meaning he will start the race from fourth place on the grid.

Hamilton was doomed as the field stormed into Turn 1, first blocking Lando Norris on the inside while being swamped by Pierre Gasly on the outside.

When they emerged from the first Variante the World Champion was lucky too, first Gasly had nipped ahead of him but in the Turn 1 melee, the front wing of the Frenchman’s AlphaTauri was damaged, as he hurtled through Curva Grande, it dislodged sending him into the wall.

This triggered an immediate yellow which prevented hard-charging Charles Leclerc from attacking the #44 Mercedes, the Ferrari with momentum was sure to have a go into the second Variante but could not as the safety car was deployed. Lucky Lewis, again.

He said afterwards: “It wasn’t great But it is what it is. We underestimated how well [Red Bull] would start. I’ve got to try and figure out how I can get by and try to limit the damage.

“You saw the pace of the Red Bull – they are so fast. It should be an easy win for them and I have to try and get past the two guys ahead,” he said of the two McLarens.

In the team report he added: “Well done to Valtteri on a great drive. It was a frustrating day for me, with a bad start due to too much wheel spin and then not being able to recover from there.

“During the race, it was difficult to get close enough to overtake the McLarens so we’ll be looking into that as well. We lost valuable points today and we’ll need to work hard to take maximum points tomorrow. It’s not the outcome we wanted for today and we can’t afford days like these, especially when it is this close in the Championships.

“We have work to do to analyse today’s race and prepare for tomorrow. I hope we will be able to limit the damage, and I know Valtteri and I will come out fighting,” declared Hamilton who will be hunting his 100th F1 victory and a sixth victory at Monza.

Trackside engineer Andrew Shovlin added: “Lewis had a tough afternoon. The start wasn’t great, we’ll look into what went wrong before tomorrow but despite being much quicker than the McLarens, he just couldn’t get close enough to pass.

“We’ll have a look at strategic options for Lewis tomorrow but the reality is that if we struggled to overtake the McLarens today we’ll face the same situation tomorrow and that’s going to hand Max a very easy win.

“We need to look at every possible opportunity as it’s our job to make sure that doesn’t happen, and it can often be an eventful race here, but we can’t afford to drop back in the first stint at the rate we did today,” added Shovlin.

Hamilton scored zero points while title rival Max Verstappen scored two, increasing the gap between them to five ahead of tomorrow’s fourteenth round of the championship. The Red Bull driver will start from pole.