Bottas: Unfortunately I’m starting from the back 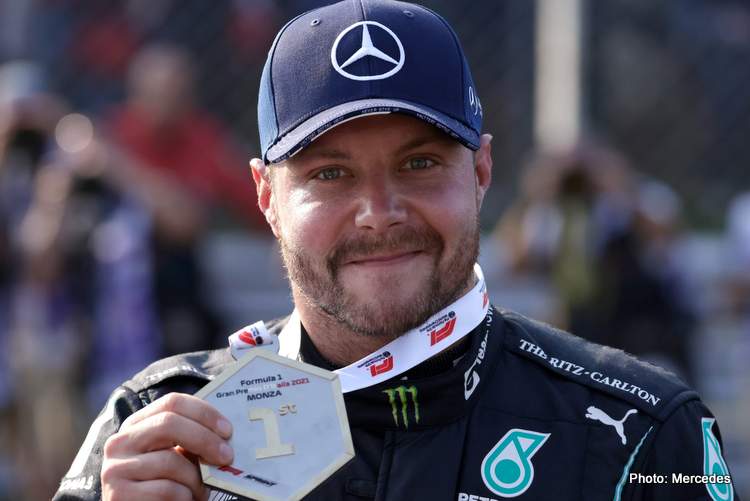 Valtteri Bottas was unbeatable on Saturday and Sunday at Monza, yet the Mercedes driver will be starting the 73rd Italian Grand Prix from the back of the grid, such are the idiosyncrasies of modern Formula 1.

The Finn, who knew he faced PU grid penalties, was exceptional in qualifying, blitzing Hamilton by a tenth of a second, and then today in the Sprint Race he delivered a lights to flag victory, while his teammate went backwards.

Had Bottas – who we learnt will be shafted ‘downstairs’ to Alfa Romeo after George Russell was chosen to partner Lewis Hamilton next year in the team – displayed these performances all the time he would not be leaving the World Champion team, he joined in 2017, for Swiss pastures.

However, the facts are he is departing Mercedes at the end of this season, and he obviously intends to go out in style if this afternoon at the Temple of Speed is anything to go by.

Speaking after his ‘victory’ in the second-ever F1 Sprint Race (the first being at Silverstone in July) Bottas said: “I feel good. It feels like it has been a while to finish first in a race.

“Unfortunately I’m starting from the back tomorrow but the speed is there, so I’ll be fighting and coming as high as I can. Today, I enjoy and it was a clean race. We had a good pace. All good.

“Tomorrow is not going to be easy, that’s for sure. The train of cars with DRS, it’s not easy but obviously strategy-wise, still a free choice of tyres for the start, so let’s see if we can do something.”

He added in the Mercedes team report later: “A good day in the office for me personally, it was a clean race and I had the pace. Feels like it has been a while since I’ve finished first in a race, so I am very happy.

“I had a good start and a clean restart as well, so those things were key for me. The car felt good throughout, and it was great to finish P1 today and get some points as well. Unfortunately, I’m starting from the back tomorrow, but the speed is there, so I’ll be fighting.

“There are overtaking opportunities here so I hope I can make my way up the grid and have a good race for the Team. It won’t be easy, but we have the pace and with the right strategy we can make something happen. I’ll give it everything, I can promise you that,” promised the Finn.

Mercedes team boss Toto Wolff was impressed: “Valtteri didn’t put a foot wrong and put in a really strong performance to finish first on the road.

“Of course, he won’t convert it into pole position because of the engine penalties, and it will be a tough race tomorrow to make his way back through the field because overtaking here is not easy, as we saw today,” added Wolff.