Verstappen: Not the best qualifying but happy with third 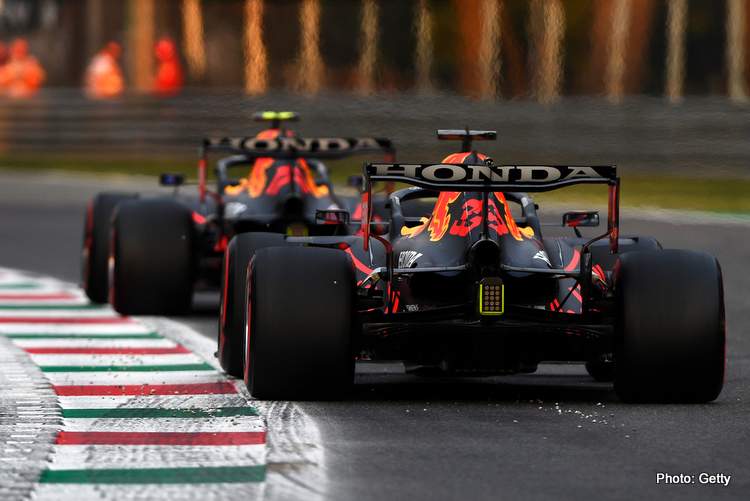 The magical pole by Verstappen at twisty aero-friendly Zandvoort, last Saturday, could not be replicated at flat-out Monza which played into the hands of Mercedes – Valtteri Bottas and Lewis Hamilton were first and second respectively – while the Red Bull package was short about half a second when it mattered for Max in Q3.

He summed up his afternoon in the team report: “It wasn’t the best qualifying session but I think for us this track is always going to be difficult. We struggled a little bit more than we wanted to in FP1, but I think we recovered quite well throughout qualifying.

“I’m happy with third and it would have been unrealistic to hope for more. I think for the sprint race maybe we can be closer but you never know around here, so of course, we will try and keep the pressure on.

“We’ve got FP2 tomorrow morning so we can see what we can do to help the long-run pace a bit more but for us, it will be more difficult around here with the long straights, nevertheless, I hope we can score good points,” concluded Verstappen who leads the 2021 F1 world championship standings by three points, with Hamilton second.

Perez was again well off Verstappen’s pace from the moment they hit the asphalt on Friday morning, which has been the norm for the veteran. With three FP sessions in the build-up to a normal Grand Prix weekend, he has time to find the sweet spot for qualy.

But with only one session before the Sprint Race qualifying he was not close, only just scraping through into Q3. He ended the day ninth fastest – a whopping six tenths down on his teammate.

The Mexican admitted afterwards: “We definitely struggled in qualifying today. Our aim in the sprint race is to try to gain some positions and come through the field strongly, I think this will be difficult with the DRS train though.

“Our long runs looked promising today and a lot of things can happen during a race so we’ll see what happens, I’m looking forward to it. We will try to optimise our performance for a strong race on Sunday,” added Perez.

While his drivers lamented their performances, Red Bull team boss Christian Horner saw the positives: “That’s a good team result, Checo has played a key role. He did a great job giving Max the tow and allowing him the benefit of a hole in the air, it probably cost Checo half a second, and he should have been higher than where he is.

“So we are pretty happy with where we have finished. The sprint race tomorrow is going to be exciting and then of course we’ll see what happens in the race on Sunday. Max is on the right side of the grid tomorrow and will hopefully pick up a tow into turn one, so it’s going to make it a really exciting start, for what is effectively qualifying.”

Tomorrow the Bulls have both Mercs to contend with in the Sprint Race, but Bottas will take a grid drop in the race, providing Verstappen and Perez an opportunity to outscore their rivals and with it, close the gap which is currently a dozen points in the constructors’ standings.

Horner acknowledged:  “The announcement has come out that Bottas has taken the engine penalty, so we know he’ll be at the back of the grid on Sunday, and we just have to see how the Sprint Race pans out. When a championship is so tight, and the gains are so marginal it’s about grabbing every point that you can.

“We’ve had a couple of good weeks in this triple-header so far, so it’s important that we close off this stage with the momentum that we have built,” added Horner. (Additional reporting by Agnes Carlier)