McLaren encouraged by bouncing back immediately 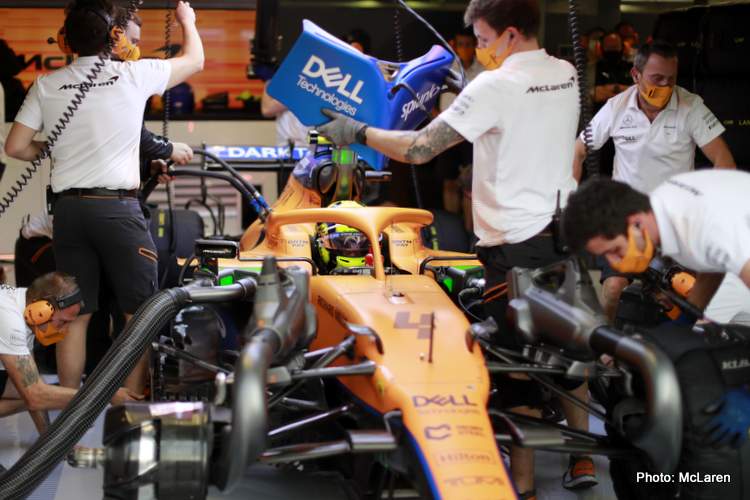 McLaren need a strong weekend at the Temple of Speed after only bagging a single point at Zandvoort last Sunday, and if qualifying for the 2021 Italian Grand Prix is anything to go by, they have bounced back admirably, which impressed their director of racing Andrea Stella.

Throughout the Dutch Grand Prix last weekend around the short and twisty seaside track, neither Lando Norris nor Daniel Ricciardo found the sweet spot in the McLaren MCL35M, we know it has one because it resurfaced at Monza!

The Orange pair were Best of the Rest, behind the top three. With Norris fourth fastest and Ricciardo fifth, the pair separated by a mere 0.006s, which augers well for a strong showing in the Sprint Race on Saturday as well as the Grand Prix on Sunday.

Stella was happy with the turnaround the drivers and team achieved: “One aspect of the Sprint Qualifying format is that it allows us to see where we are much earlier in the weekend. Today, we found out that we’re competitive at this track, and expect it to be better for our car than Zandvoort was.

“We had a difficult event last weekend, so it’s encouraging we could bounce back immediately and put ourselves in a good position to score well here at Monza. There’s a lot to do before that, with Sprint Qualifying tomorrow following a final practice session.

“We need to keep working hard, keep thinking and optimise all of the variables still within our control to ensure we can maximise our opportunity,” added Stella in the team report.

Norris said of his day at the office: “I’m satisfied with today – we’re back in a much better position after last weekend, and we seem much more competitive. I think it’s the perfect start to the weekend.

“There was a possibility of being P3 if I’d put the lap completely together – but one small mistake, I think, cost us. It’s a bit of a shame that I missed out on it, but fourth still puts us in a very good position compared to the people we’re really racing against and battling with this weekend and for the Championship.

“I’m happy – and it’s a good way to bounce back after last week,” added Norris.

Ricciardo echoed his teammate: “From a general standpoint, I’m happy. We were fast and were fighting for top three on the grid, so I’m happy we had the potential to do that. But I’m so frustrated that we got that close but not quite close enough. It was more of a tease than anything, but it’s all good.

“I think the team performance was great. We didn’t put ourselves in a difficult situation with any of the out-laps and I was in the right places in terms of track position, we had good tows. My only frustration is that it’s so close and, unfortunately, I was on the wrong side of the milliseconds. It is what it is and I’m now looking forward to the racing,” added the Australian.

The Woking outfit needs a reversal of fortunes this weekend at Monza, after the below-par performances in Holland, which saw their immediate 2021 F1 constructors’ championship rivals Ferrari overtake them in the standings. The Reds are third on 181.5 points, 11.6 more than McLaren but the home team might struggle in front of the Tifosi. (Additional reporting by Agnes Carlier)