Hamilton: George has everything to gain, it’s all a plus 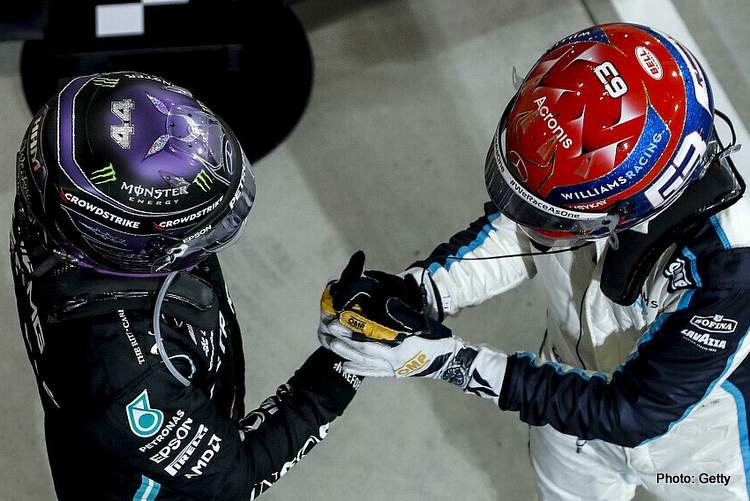 George Russell has nothing to lose in his move from Williams to Mercedes next season, his future Formula 1 teammate Lewis Hamilton assured reporters at Monza.

Russell, 23, will be replacing Valtteri Bottas alongside the seven-time F1 world champion and fellow Briton at a team that has dominated the sport for best part of a decade.

“George is coming in to learn from the team but he’s got everything to gain. There’s no real negative for him coming in the team. It’s all a plus,” 36-year-old Hamilton said ahead of this weekend’s Italian Grand Prix in Monza.

Hamilton has a record 99 victories in the top flight, 101 pole positions and a string of other records as the sport’s most successful driver of all time.

On the day of the Russell announcement, Hamilton wrote on social media: “I want to take a moment to welcome George Russell to the team. I remember meeting him when he was young, dreaming of one day being an F1 driver and I’d only just reached my own dream of becoming an F1 driver, so I know what this day means and how it will feel for him.

“He is a great example to all the kids out there that dreams do come true when you chase them wholeheartedly. Through hard work, he has rightly earned his spot on our team. I look forward to seeing him grow as a driver with this great team and working with him to raise this team higher. See you next year,” added Hamilton.

If Russell prevails, it will put even more of a shine on the youngster’s talents. If Hamilton wins out, it is only to be expected, it’s a win-win situation for the youngster.

Ferrari star driver Charles Leclerc compared the situation to when he arrived at Maranello as a fresh, young teammate to four-times F1 world champion Sebastian Vettel, then the main man at the Italian team, and eclipsed him.

“I think this is a pretty similar situation to mine when I arrived in Ferrari with Seb by my side,” said the Monegasque, now the team’s big hope for the future. It’s a great position to be. George is very, very talented and he will be next to one of the best in the history of the sport.

“So he doesn’t have much to lose, which is a good position to be in. He can just give it everything and show his talent and I’m pretty sure he will show the world his talent,” added Leclerc.

Russell said it had been made clear to him by Mercedes that he would be on level terms with Hamilton, despite having only stood on the podium for the first time in a farcical Belgian Grand Prix last month.

Asked whether he felt he could beat Hamilton, Russell replied: “Naturally, I believe in myself and I have high aspirations. But equally, I know just how tough it’s going to be.

“I’m in one of the most fortunate positions on the grid to be able to go out there and learn from him. I see this partnership with Mercedes as a long-term thing and I need to use next year as an opportunity to learn everything I can.

“We all know how strong Lewis is and in my opinion, he’s probably the greatest driver of all time,” concluded Russell. (Reporting by Alan Baldwin)

I want to take a moment to welcome @GeorgeRussell63 to the team. Through hard work he has rightly earned his spot. I look forward to seeing him grow as a driver with this great team and working with him to raise @MercedesAMGF1 higher. See you next year🙏🏾 pic.twitter.com/CRsgrilmUd