Hamilton: Valtteri did a mega lap and was just quicker 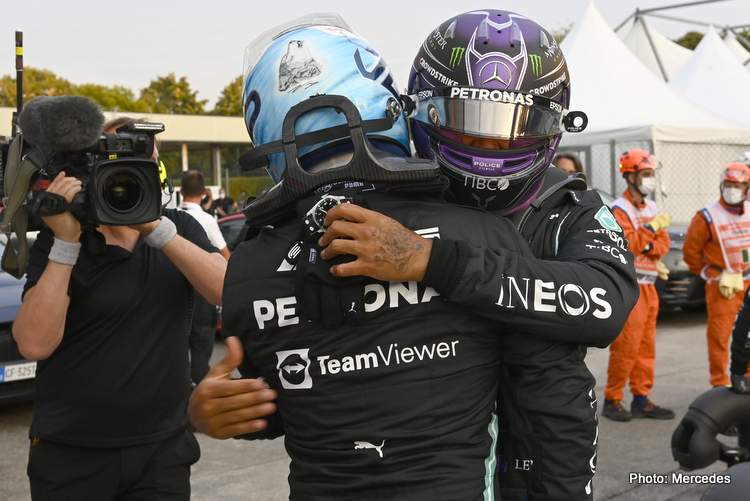 The Formula 1 World Champion admitted he had no answer to the flying Finn in qualifying on Friday.

Not often does Hamilton get beaten in any qualifying, the 101 pole starts are testament to that, but with Mercedes again looking the most potent package to have at Monza, he was short a tenth when it mattered in his final run in Q3.

Typically, Hamilton was gracious in defeat to Bottas who was fastest in the session, saying in the team report: “First, I want to congratulate Valtteri, that was really a mega lap and he was just quicker. I couldn’t match it at the end so very well deserved.

“Especially with the news that went out earlier this week, it’s great to see Valtteri driving so well. From my end, I struggled a bit in that last session for whatever reason, so not the best Qualifying for me. But in general, it was close between us all out there and I’m happy to have a front-row lockout for the team.

“We have to get off to a good start tomorrow and try and maximise the opportunities. There has been many lost points this year so every point really counts and we need to try and capitalise during these sprint race weekends. The format is exciting and it’s amazing to see the Italian fans back. I hope we can give them a good show,” added Hamilton.

The Briton, three points behind Red Bull’s F1 World Championship leader Max Verstappen, is targeting his eighth world title this year, and on Sunday will be looking to add to his five victories, in 2012, 2014, 2015, 2017, and 2018, at the Temple of Speed. (Additional reporting by Agnes Carlier)