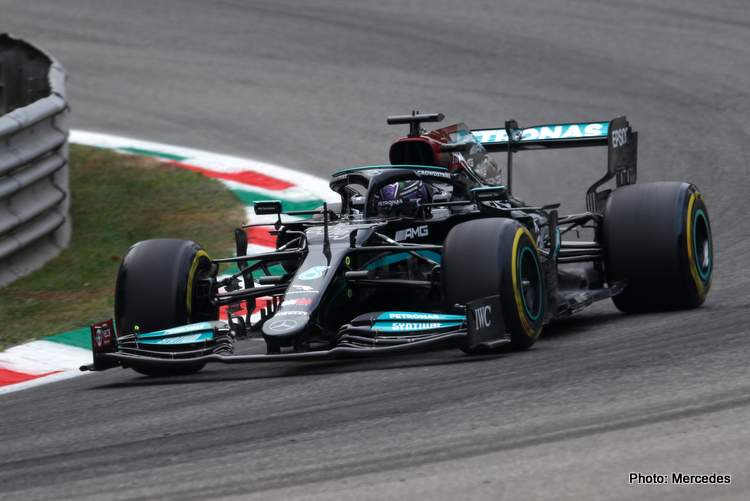 Lewis Hamilton topped the timing screens after a busy first free practice of the 2021 Italian Grand Prix weekend, Round 14 of the 2021 Formula 1 World Championship at Autodromo Nazionale di Monza.

Mercedes were always expected to be quick at the Temple of Speed, with its high-demand on power, Hamilton made the most of it with a strong 1.20.926 lap in FP1, the only driver to dip below 81 seconds and 0.452s better than his title rival.

Dutch Grand Prix winner Max Verstappen was second fastest, but four-tenths shy of the top time with a best effort of 1.21.378 which was just under a tenth up on third-placed Valtteri Bottas in the other Mercedes – the Finn half a second down on his teammate.

Notably, Hamilton’s best efforts were on a set of medium Pirelli tyres, the World Champion not even bolting on the softer compound during the session, while Verstappen was on softs for his best lap.

Lance Stroll and Sebastian Vettel were fourth and sixth for Aston Martin, the Merc customer team drivers finding a good turn of speed out of their package. Notably, though, the best time of the pair was seven-tenths shy the benchmark.

In fifth, splitting the Green cars, was AlphaTauri’s Pierre Gasly, again the second-best Honda-powered driver, with Red Bull’s Sergio Perez down in tenth. The Mexican taking his time to get dialled into the weekend.

Expected to struggle at home, Ferrari’s best effort was not as bad as predicted. Carlos Sainz popped up in seventh, but lacking a full second to be at the sharp end. Charles Leclerc was 11th in the other Red car.

Fernando Alonso was eighth in the Alpine, with teammate Esteban Ocon 15th.

The McLaren duo were lower than expected but did show handy pace on their flying laps, which were both deleted for track infringements. Daniel Ricciardo ended the one-hour session ninth with Lando Norris 12th, a tenth between the two Orange cars.

Robert Kubica, called up to replace COVID-struck Kimi Raikkonen, was 16th in the Alfa Romeo, seven-tenths on Antonio Giovinazzi who was good for 13th and fastest of the Ferrari customer-team drivers.

Next up, later today, Sprint Qualifying! 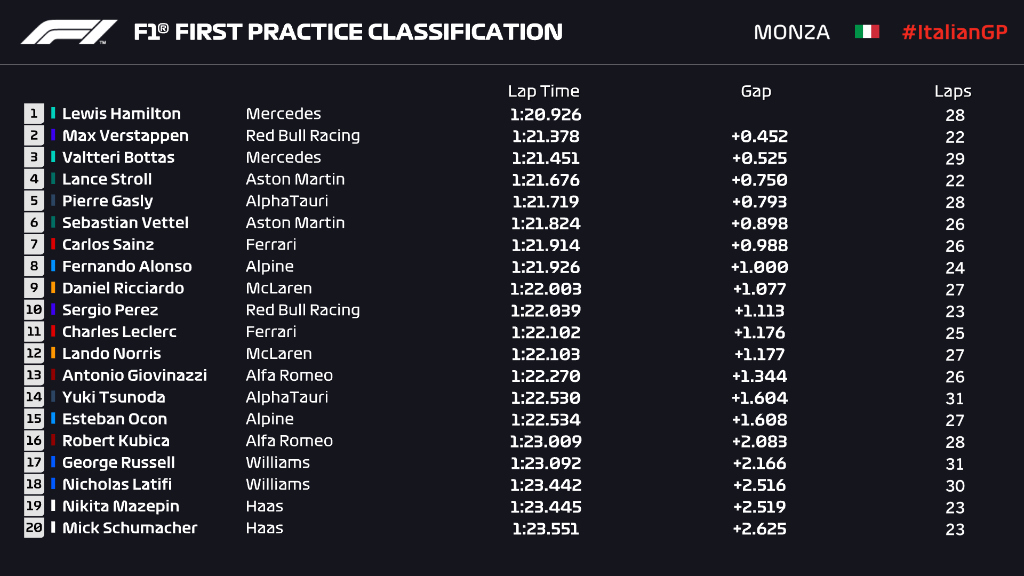