Temple of Speed awaits the Lewis vs Max show 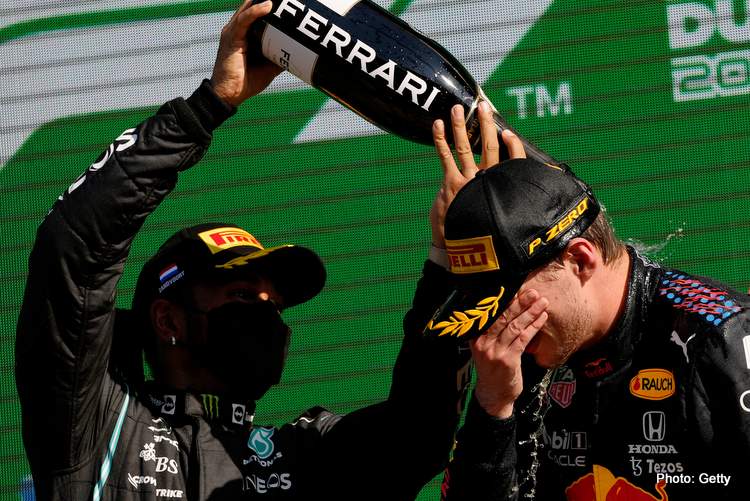 Formula 1 title rivals Max Verstappen and Lewis Hamilton will be sprinting at the ‘Temple of Speed’ this weekend ahead of what could be another wheel-to-wheel duel at Italy’s super-fast Monza circuit.

Still the home race for Ferrari despite three other grands prix being held in Italy since last September’s visit, Monza will host the sport’s second Saturday Sprint after the concept debuted at Silverstone in July.

Qualifying is held on Friday for a short Saturday race that defines Sunday’s grid and awards bonus points ahead of the 14th round of the championship.

Slipstreaming will come into play at a low-downforce power-sensitive circuit with cars at full throttle for most of the lap.

The title contenders could be level on points by Sunday, but with Red Bull’s Verstappen ahead 7-4 on race wins, if Hamilton takes pole for Mercedes and his Dutch rival fails to qualify in the top three.

The 23-year-old has yet to start on the front row at Monza but is on a roll, three points clear in the championship after winning his home Dutch race at Zandvoort last weekend and ready to complete a triple-header of triumphs.

“It hasn’t been our best track of the calendar the last few years but of course I know that this year we are competitive in general everywhere,” said Verstappen, who has won five of the last seven races including Sunday’s Dutch Grand Prix.

“We just need to nail the details and then I’m sure we can be competitive.”

Hamilton has not won a race on pure pace since Spain in May, his home victory at Silverstone coming after he and Verstappen clashed at the start, with the Red Bull driver crashing out.

Verstappen had won the sprint element of that, gaining the three bonus points.

“We learned lessons on the new format at Silverstone and look forward to bringing that knowledge with us into this weekend,” said Mercedes boss Toto Wolff, whose team have won five of the last seven races at Monza but not the two most recent ones.

Last year’s race was an anomaly, won by AlphaTauri’s Pierre Gasly after Hamilton was penalised for entering the pitlane while it was closed. Verstappen retired with a power unit problem after 30 laps.

Gasly said: “After the French Grand Prix this is very much a second home race for me now, because I live just 15km from the track.”

“The weekend will be something new for me, returning to a race circuit where I was the last person to win the Grand Prix. I´m very keen to be there and there should be plenty of tifosi (fans), unlike last year. I hope we can get another great result again this time,” added the Frenchman.

Ferrari’s Charles Leclerc was the winner from pole at Monza in 2019 while the Monegasque’s current team mate Carlos Sainz was second last year for McLaren.

The race at the park circuit outside Milan will have a 50% capacity crowd, after being run behind closed doors last time.

“This year might be a bit more difficult compared to 2019 but it will be good to feel the support,” said Leclerc.  (Reporting by Alan Baldwin)

Formula 1 statistics for the 2021 Italian Grand Prix at Monza