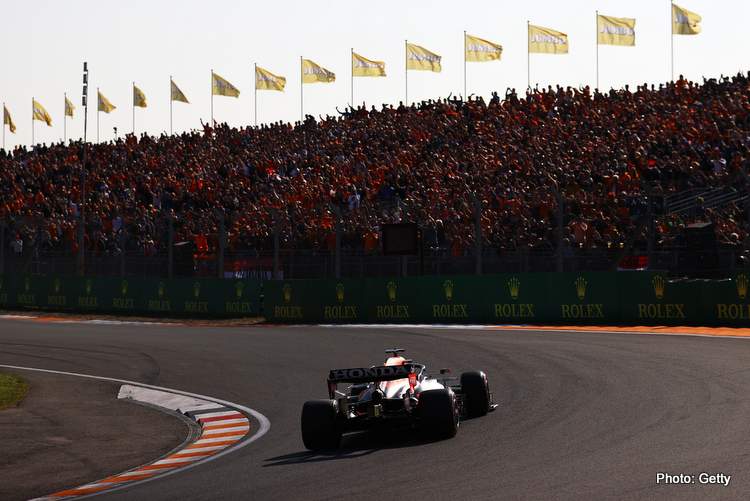 Avid number cruncher Nikola Stanchev provides us with a unique look at telemetry, juggling the numbers to ascertain the pecking order and driving techniques during the 2021 Dutch Grand Prix weekend.

Qualifying is when Formula 1 teams unleash the best of what they have in their cars for drivers to have a shot at good grid spots. In other words, they don’t go quicker than they do on Saturday afternoons.

From the action in qualy at Zandvoort, Nikola analyses the data below.

Let us start with some estimations and comparisons of all drivers’ performances during their fastest qualification laps. The graphics below represent average grip levels, which are calculated using the lateral and longitudinal accelerations.

Bear in mind that the Zandvoort circuit has some corners with extreme banking and camber, so the estimations of the corresponding accelerations are a little bit off.

However, it should not be by much so it should give us a pretty clear picture of what is going on. 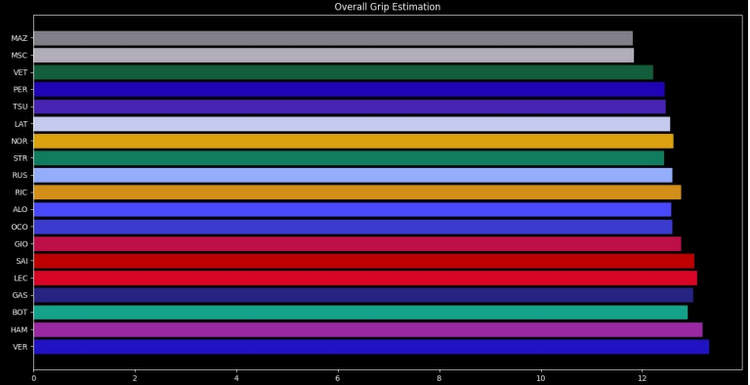 It can be seen that Ferrari’s drivers have quite a strong baseline grip, while McLaren are suffering on these kinds of fast-flowing circuits. 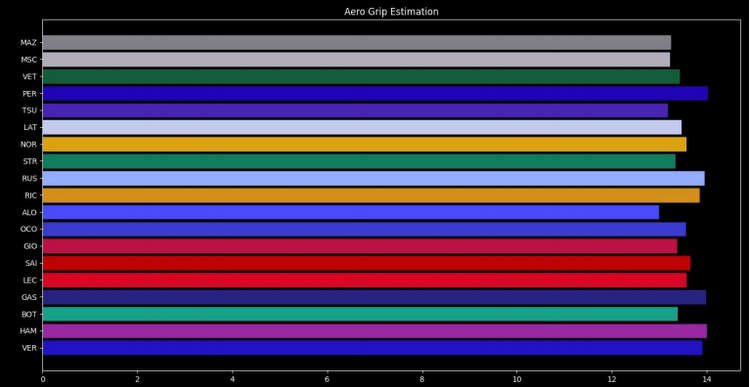 The aero grip is an estimation that presents us with a weighted average of drivers’ performances in the very fast corners. It is interesting to see that Russell is able to extract so much from the car at the fast sections. Another surprise is Ricciardo’s score.

As we will see, when comparing him to Alonso, Daniel manages to utilize more grip at high speed and turn the car around at those corners, for example the second to last corner.

Below is an analysis of telemetry comparison, and estimated live delta between key driver combos during qualifying for the 2021 Dutch Grand Prix: 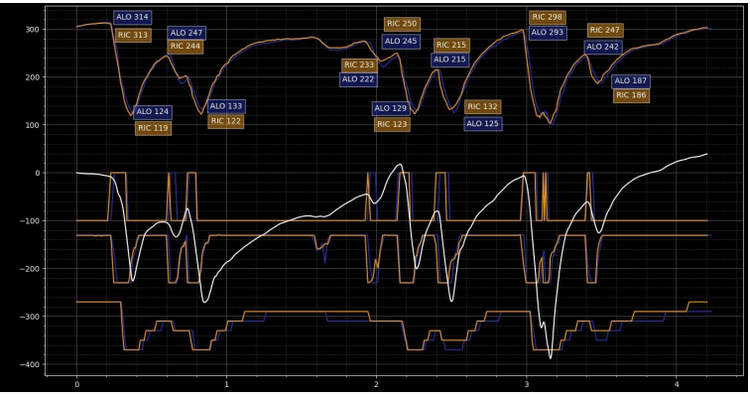 Daniel is gaining a lot on the straight and the very fast corners. Alonso is using lower gears at some corners in the second half of the lap which may suggest he was trying to combat some understeer.

To sum up, it is Fernando who is gaining at slower corners (100kph to 160kph) with Daniel having an advantage on straights, including traction, and faster corners (170kph and up). 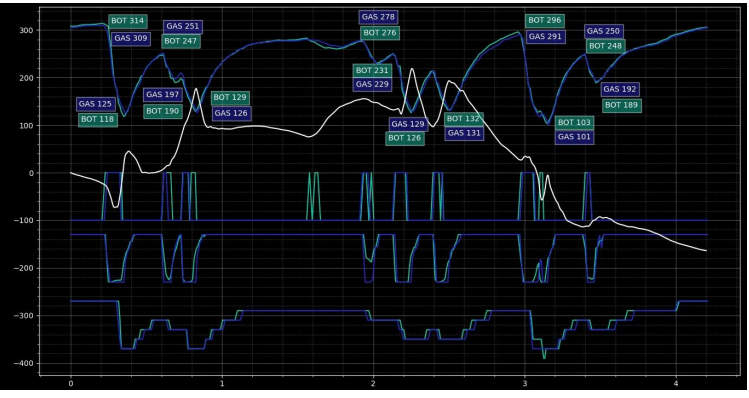 Once again Gasly was best of the rest. It is the final sector and a bit, where Bottas puts himself in front of Gasly. Also interesting to note the fact that Bottas is double-pedal through Turn 7, searching for more mid-corner stability.

He very briefly goes to a lower gear at the second corner of the chicane, which strongly suggests that he is using it to rotate the car better, namely to eliminate mid-corner understeer. The most notable speed difference is at the apex of T2 where Gasly is 7kph faster. 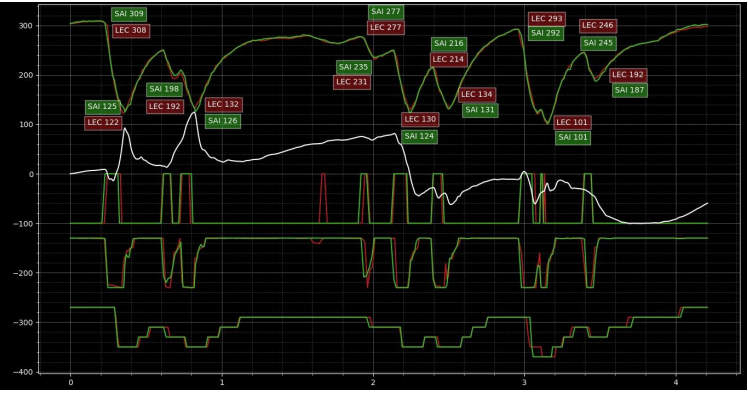 Ferrari’s pace was a pleasant surprise. The not-so-power demanding and twisty circuit seemed to suit the current Red package. Charles lifts and taps the brake before T7 in contrast to his teammate.

Nevertheless, they are quite closely matched through the entire lap, but as was the case in Spa-Francorchamps, Carlos has the car set to be a touch faster on the straights. 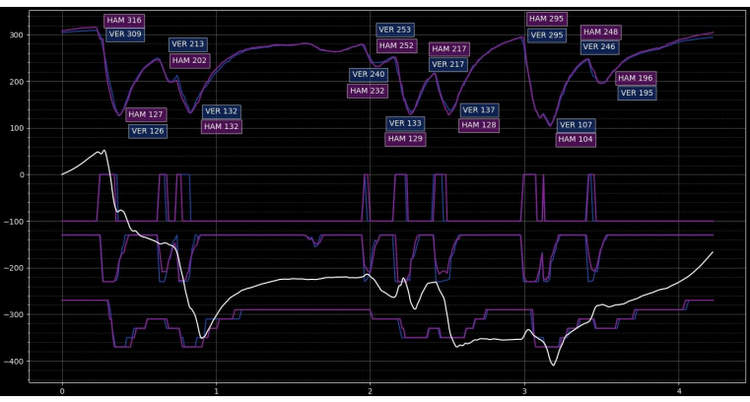 Turn 1 to the exit of Turn 3, is where Max’s major early advantage came from. The minimum apex speed of Lewis at T3 matches that of Max, however, his entry speed is not quite up enough. The biggest speed difference is just before braking for T3. Verstappen is 11kph faster there. 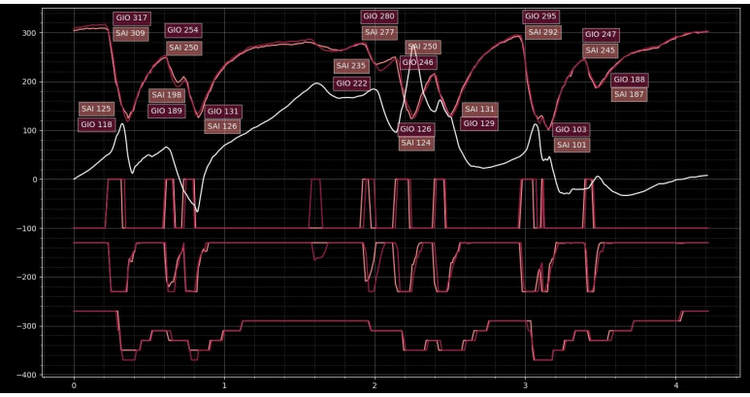 A solid performance worth mentioning is that of Antonio Giovinazzi, and especially his Q3 lap which secured him P7. Let’s compare it to Carlos’ P6 lap. The white line is the estimated live delta between the drivers. If it goes up, then that means that Antonio is gaining and if it is going doing the converse.

With this in mind, it can be seen that Sainz is losing mainly on the straights, even between close corners. However, apart from T8, the Ferrari driver goes through the corners faster. Turn 1 and Turn 3 is where Giovinazzi is using lower gear compared to Carlos, probably to search for better rotation and understeer elimination.