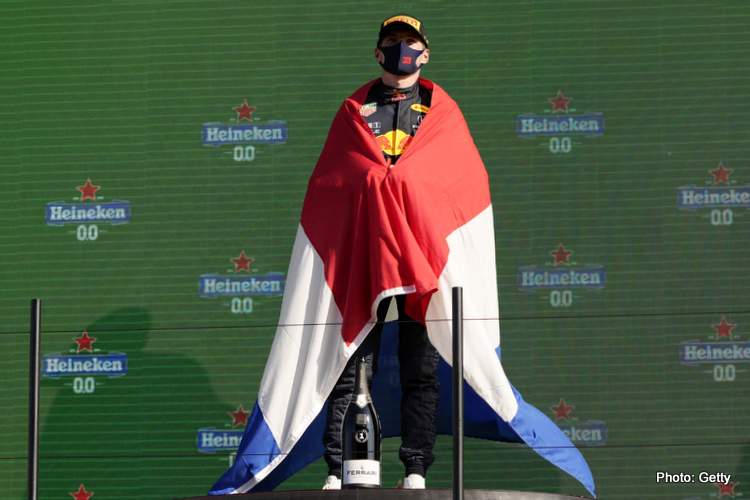 Max Verstappen’s historic win at the 2021 Dutch Grand Prix drew the admiration of two Formula 1 world champions, Nico Rosberg and Jenson Button, who hailed a performance worthy of a champion.

In a race that was literally made for him, the 23-year-old Dutch superstar did not let anyone down as Zandvoort was painted Orange all weekend thanks to his exploits, particularly in qualifying on Saturday, and then of course Sunday’s race.

The place will probably remain Orange forever after the past three days!

On top of that, Verstappen’s name is now etched as the winner of the 31st Dutch Grand Prix, back on the F1 calendar for the first time since 1985, when Austrian great Niki Lauda won the race.

A big difference, this Sunday it was a local hero that triggered the biggest party in Holland. Some likening it to winning a major football tournament. The country is buzzing thanks to their new favourite son.

Rosberg, who beat Lewis Hamilton to the F1 title in 2016, was also impressed on an afternoon in which Verstappen made no mistakes, winning and taking a three-point lead after 13 rounds, while calmly soaking in the adulation and celebrations that he triggered.

Former Mercedes driver Rosberg, on duty for Sky F1, said: “That is his strength. You could see it in his celebrations also… it wasn’t like the greatest day of his whole life!

“Yes, ‘I got a great win, let’s celebrate’ but there’s always still some measure and that’s how he kept his calm through the whole weekend. So it’s really the mental attitude of a champion and a champion’s drive today,” observed Rosberg.

2009 F1 World Champion Jenson Button agreed: “He’s very, very calm in how he goes about his business. Obviously, we all have emotions and adrenaline at times and you can be a little bit outspoken, you regret it after.

“But he’s been pretty consistent in the way that he has been with victories, and in defeat also. That’s when you become stronger, the defeats and the tough days, but he’s way beyond his years and I think that comes from having both parents in competitive motorsport,” added Button

For sure his 17th victory will always be special for Verstappen in terms of legacy but, more importantly, after the setbacks at Silverstone and Hungary, this win re-energises his 2021 campaign while giving him and Red Bull the upper hand as the circus moves to Monza this weekend.

Verstappen said: “I couldn’t have asked for more at my home grand prix. It’s always tricky because everyone expects a lot from you and it’s very difficult to fulfil that, especially in a championship like this when it’s so tight. But from our side again today we did everything well as a team.

“We had a good start but then we had the right calls with the pit stop. We made sure we had the right gap before they could try and undercut us, and of course, they threw all at it with Valtteri as well keeping him out and trying to make it difficult for me, which is fair play,” added Verstappen.

As for the pressure of the home support, he said: “I have been always very focused. I know I have to focus on driving. That has been quite straightforward. There are more distractions on the grid, or when you drive out and there is more of a crowd, but we are professional enough to just focus on our job once we are in the car.”