Sainz: Honestly I had zero pace in the car today 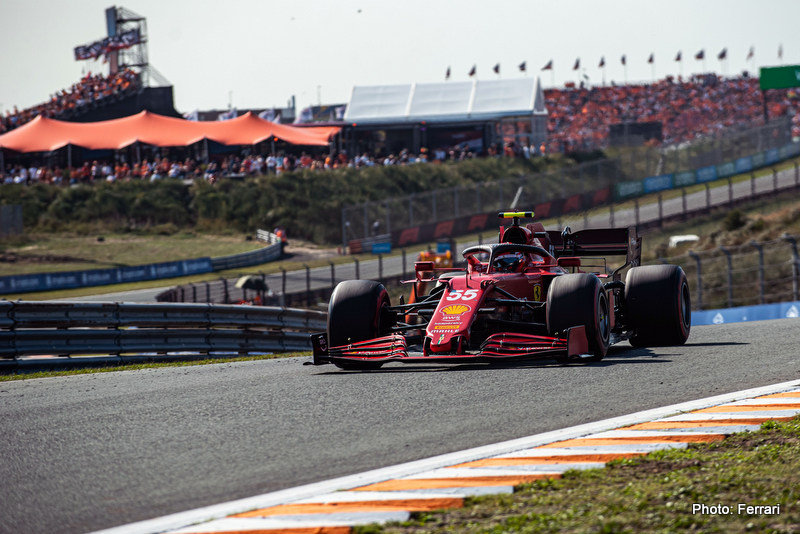 Carlos Sainz said that he had “zero pace” in his Ferrari at the Dutch Grand Prix on Sunday as he finished in seventh position.

Qualifying sixth on Saturday, Sainz appeared to be in line for a strong finish but struggled all afternoon and lost a lot of ground on his teammate Charles Leclerc who started one spot ahead of him.

Given the difficulty in making overtakes at Zandvoort, it appeared the Spaniard would be able to hold onto sixth, but lost out to his countryman Fernando Alonso late on and fell to P7.

Speaking after the race, Sainz said that his lack of pace was “very strange” and he needed to look into it ahead of next weekend.

“I honestly didn’t enjoy it at all, just sliding around,” he said. “Honestly I had zero pace in the car today. I didn’t feel at home with it compared to the rest of the weekend. For some reason I was very far away in terms of feeling.

“It is something to analyse as it’s the first time it has happened this year where I really don’t find myself and I spend the whole race sliding and struggling for pace and in the end I was just struggling for tyres.

“It was very, very strange. Honestly, it’s a big puzzle at the moment because I don’t know where the pace went and I’m pretty sure there was something going on that I need to look into. Let’s hope we can find what happened before next weekend.”

Leclerc had a far better afternoon than Sainz and finished fifth, but was still not entirely satisfied with his efforts across the weekend.

“I’m happy with the pace, not completely happy with P5 because I think if we had done a better job yesterday in qualifying and I had put the lap together I think fourth place was definitely on the cards,” he said.

“Pace-wise we were the best in the midfield but it was just difficult to show it today because we were struggling to get closer to Gasly than that.”