Hamilton: I pushed flat out but they were just too good 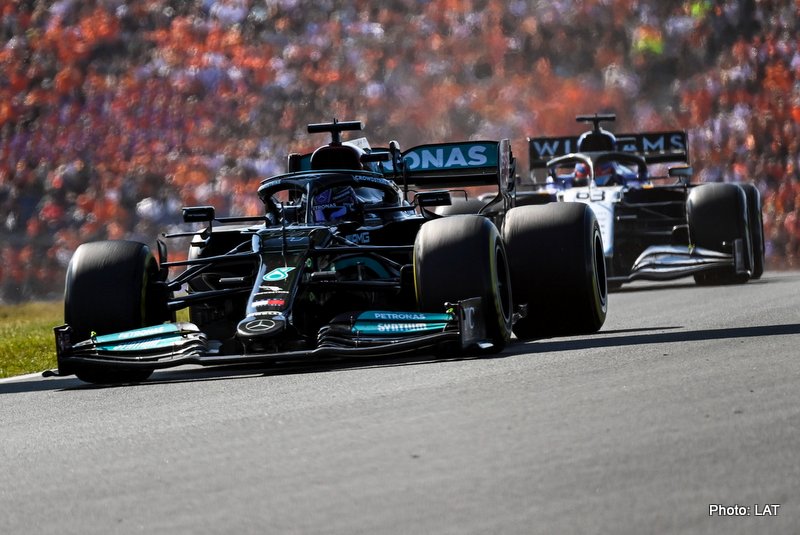 Lewis Hamilton said that Max Verstappen and Red Bull were just too good on their way to victory at the Dutch Grand Prix on Sunday.

Hamilton pushed Verstappen for much of the race but never quite had enough to pose a real threat on the race lead, with the 36-year-old now three points back in the drivers’ championship after finishing second with the fastest lap.

The Mercedes man questioned the strategy employed by his team over the radio during the race, but speaking afterwards Hamilton did not appear overly frustrated with the outcome.

“What a race, what a crowd,” he said. “It’s been an amazing weekend.

“Max did a great job so congrats to him. I gave it everything I had out there, but they were just too quick for us this weekend.

“I think even if we’d have got everything right today with the traffic, the pit stops and the strategy, it’d still have been tough to get by them. We didn’t get those elements spot on, but either way, we pushed as much as we could and we’ll take it offline, debrief and see how we could have improved. We’ll be fighting right to the end.”

Hamilton has had plenty of success at his own home race and clearly enjoyed the atmosphere and newly renovated Zandvoort circuit, even though Verstappen came out on top.

“It was an incredibly difficult race out there, physically and mentally I think it was one of the toughest, but it’s an amazing track,” he added.

“The fastest lap at the end was one of my favourite parts of the race, it’s an incredible track to drive on low fuel, this is one of my favourite tracks now and I’ve had a great time here in Holland, so I’m looking forward to coming back next year,” Hamilton concluded.

Formula 1 heads to Monza for the Italian Grand Prix next weekend in what could prove a pivotal event in the title race.