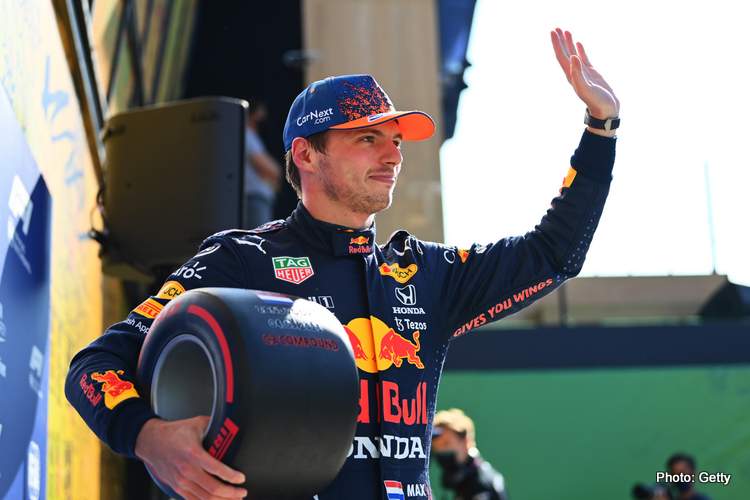 Max Verstappen’s 10th career pole position is sure to go down as his sweetest to date, sending everyone in the Zandvoort stands absolutely bonkers as he powered to top spot on the grid for the 2021 Dutch Grand Prix.

Ten is a special number, 1.08.885s was a special lap at a special venue which seems to be one of the trickiest venues on the F1 calendar, making a return to the top flight for the first time since 1985. That year Nelson Piquet put the Brabham BMW on pole.

This year – the 31st running of the race – it was a Dutchman doing the business at a race that was made for him, on home soil, with the Orange Army out in force to pay homage to their Emperor. Special is an understatement.

The Red Bull driver said as much in parc ferme after qualifying: “It’s an amazing feeling to get pole position here.

“The crowd is incredible and today was also very enjoyable. The car was very nice to drive and this track in qualifying, once the fuel comes out, it’s really cool.

“It’s the best starting position, we know passing is difficult, and I don’t expect it to be an easy race around here. A lot of laps and the tyres are struggling through the high-speed. But today was good so of course I hope we can finish it off tomorrow,” said Verstappen.

The Dutch ace added in the team report later: “Everyone was going crazy each time I crossed the line and it’s amazing to see people having the time of their lives in the grandstands. I’ve had so much fun already from FP1 driving this track and in qualifying when you’re on low fuel it’s just incredible.

“Sector two and the banked corners, plus the last corner where you’re flat, it’s a nice sensation and it’s just so enjoyable to drive. It’s an old school track that is flowing and fast like Suzuka where you really feel the grip of a Formula 1 car, it’s challenging and I enjoy tracks like this.

“Today we worked really well as a Team and took another good step forward with the car compared to yesterday. Qualifying was quite tricky with the red flags, you could see there was no room for error which is nice and makes it more exciting, but my lap itself was good.

“There were two occasions where I lost some time, first with a double upshift coming out of Turn 3 where it is very bumpy, and then my DRS didn’t open coming out of the last corner which we need to look into, but fortunately the lap was enough for pole.

Of course, at this track, it’s important to be starting from out in front because it’s very difficult to overtake here so the start will be key and then we need to look after our tyres and be on alert because new tracks can often bring chaos.

“I expect Mercedes to be strong, you could see the gap was close today, so tomorrow isn’t as straightforward as it seems,” added Verstappen, who trails Lewis Hamilton by three points in the 2021 F1 drivers’ standings; the Mercedes driver will start from second.

In stark contrast teammate, Sergio Perez was unlucky to be stranded in Q1 when he failed to complete a final flying lap due to congestion, first in the pits and then out on track.

He was not happy: “I’m really disappointed because we had such a fantastic car going into qualifying. We were making great progress and could have had two cars up there tomorrow, possibly locking out the front row and so we really didn’t expect to be in this position.

“We were just so unlucky at the end, people were going so slow in the pit lane and I didn’t manage to get my second lap in, I missed it by just one second and a half. We’ll discuss today together as a group and see what we can learn for the next race as this is how we get stronger as a Team.

“We know tomorrow will be really difficult to overtake, but this is an unpredictable track, no one knows what to expect and so of course I will try and minimise the damage and score something for the Team,” added Perez.

Red Bull team boss reflected on a bittersweet session: “It was an amazing performance by Max under massive pressure in front of his home crowd to become the first Dutchman to take pole position at a Dutch Grand Prix.

“Max has got a lot of racing experience behind him now and the way he deals with pressure has been outstanding in recent years and he’s done a great job today. It’s a tough track to overtake at and he’s in the best place to start tomorrow’s race so the first part of the job is done.”

Of Perez, Horner explained: “With Sergio, we sent him out in Q3 with enough time to go but then everyone backed up in the Pit Lane which ultimately cost him and he just missed out on getting another run by a second and a half. It was massively frustrating for him and the Team so we’ll have to fight back.”

Verstappen has two Mercedes behind him for the start with, Hamilton almost beside him on the first row and Valtteri Bottas in third, and large in the Red Bull’s mirrors.

Horner added: “Looking at the start, we have the two Mercedes directly behind Max so they’ll be able to split their options so it’s important we just get our heads down and focus on our own race.”

Red Bull trail Mercedes by seven points in the 2021 F1 constructors’ championship ahead of Round 13 on Sunday.