Leclerc: A solid Saturday for us 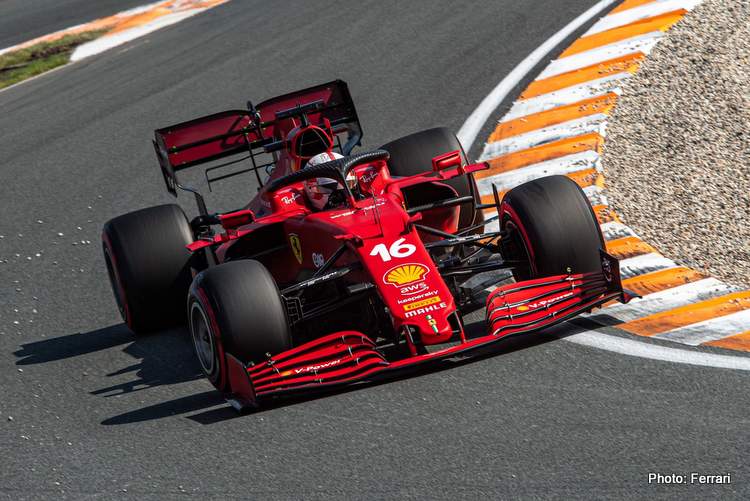 The at-times lame Ferrari SF21 has been prancing around Zandvoort as if it means business, with both its drivers Carlos Sainz and Charles Leclerc at the sharp end of qualifying on Saturday.

The Reds topped the timing screens at the end of Q1 with Leclerc showing the way, and then second best in Q2, before having to settle for fifth, Sainz in the sister car was sixth making it an all Red third row for tomorrow’s 31st Dutch Grand Prix.

In the team report, Leclerc believed he could have gone one better: “It’s a shame to have missed out on fourth place today, but in the end, a fifth and sixth on the grid is a solid Saturday for us. We were probably a bit too aggressive on the front wing set-up on the last run and I lost the rear in the middle sector.

“For the race, tyre degradation is still something of a question mark. We didn’t do a lot of long-run simulations in free practice, so we will manage that the best we can tomorrow. The most important thing will be to have a good start because overtaking will be difficult here,” explained Leclerc.

Teammate Sainz, who crashed earlier in the day during FP3, shaded his teammate all session, but it was very close, a mere hundredth of a second is what separated him and Leclerc on the timing screens. However, the Reds were lacking six-tenths to the pace setters when it mattered.

Sainz reported: “It was one of the most challenging qualifying sessions of the season and for sure the most stressful! I can only say a massive thank you to the mechanics.

“After the incident in FP3, the car only came back to the garage over 20 minutes after the session, so it was extremely tight on timing to check it and fix everything, and again the entire team did an incredible job. Watching them all over the car was impressive!

“After all that tension, once I knew we were going out, I really focused on resetting my mind and trying to build up my pace lap after lap. We managed to recover well and had a good quali in a tricky and very tight session.

“I think overtaking will not be easy tomorrow, but we have a good opportunity to bring home good points from our starting position,” added Sainz.

Racing director Laurent Mekies had a word to say about the repair job on Sainz’s car after FP3: “First of all, I want to congratulate our mechanics for managing to repair Carlos’ car in time for him to take part in qualifying.

“It was by no means a given and they really did a great job. Having both drivers on the third row is a good team result.

“Going into this race, we had said we wanted to get back to fighting for these places in qualifying and we have achieved our first objective of the weekend. Carlos did very well to immediately get a feel for the car after he had gone off the track.

“It was a shame Charles didn’t manage to get the place on the second row that was within his grasp, especially when you look at the fantastic lap he did in Q2. But it means he can do it again tomorrow! Now we are focussing on the race, which will be very tough.

“On a track where overtaking is complicated, the start will be even more crucial than usual. Furthermore, we will have to do a good job of making the most of any opportunity that comes our way on a track that does not forgive the slightest mistake,” added Mekies.

Ferrari are fourth in the F1 constructors’ championship 3.5 points shy of McLaren, who had a below-par Saturday, their drivers Daniel Ricciardo and Lando Norris, sixth and 13th respectively.