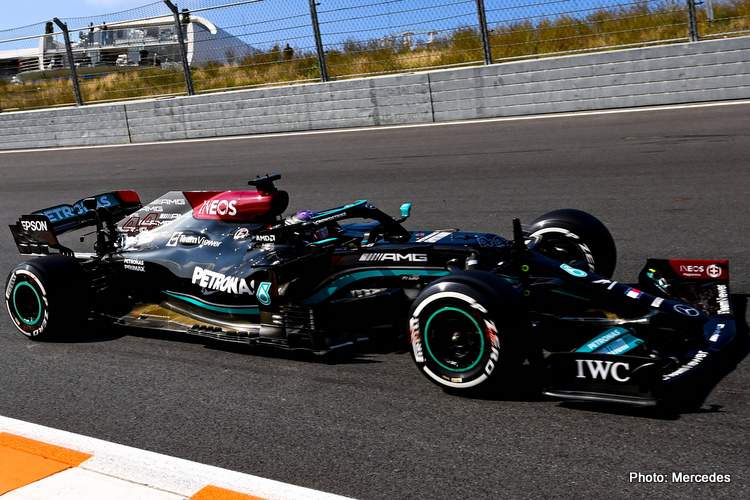 It might be Max Verstappen’s party at Zandvoort this weekend but Lewis Hamilton might just be the party pooper as the Mercedes driver ended the first free practice of the Dutch Grand Prix fastest, a tenth up on the Red Bull ace.

Formula 1 engines fired up in anger and officially at Zandvoort for the first time since Niki Lauda won at the venue in 1985, to kick start the 2021 edition of the Dutch Grand Prix with the first hour of free practice.

The sun shone brightly over the packed seaside venue as F1 action returned for the 31st time and immediately local hero Max Verstappen, delighted his Orange Army by going top of the timing screens with his first flying lap. But that only lasted for the first half.

Around the halfway mark, Sebastian Vettel reported an engine failure on his Aston Martin, and was forced to park it, going on to be a firefighter, marshal, mechanic etc. This prompted a lengthy stoppage as they grappled to remove the ‘electrically charged’ stricken car. It was a strange scene.

The stoppage wasted a great deal of valuable time, nearly half an hour went begging, making a case for stopping the clock when stoppages go beyond five minutes or so. Track time is important for drivers and teams, not only for setup but also safety at a track, never before used for F1.

Nevertheless, when track action got going everyone had a go or two at a flying lap, with Hamilton topping the timing screens, 0.097s up on Verstappen who was baulked by traffic while on hot laps.

It’s early days right now and perhaps the times are meaningless, but the cream has risen to the top quite quickly as both contenders topped the timesheets after the first session.

The Ferrari duo looked good out of the box, with Carlos Sainz and Charles Leclerc second and third respectively. The Spaniard a tenth down on the top time in third with Leclerc fractionally slower in fourth. It will be interesting to see if they can sustain the form with the finicky SF21

Valtteri Bottas was fifth in the other Mercedes, a couple of tenths shy of his teammate’s table-topping effort.

Fernando Alonso ended sixth, less than a tenth up on his teammate Esteban Ocon; the pair lacking just over half a second relative to the benchmark time. Alpine may have a handy car again this weekend.

Antonio Giovinazzi was eighth in the Alfa Romeo, ahead of Lance Stroll’s Aston Martin in ninth, and AlphaTauri’s Pierre Gasly rounded out the top ten.

Notably, Sergio Perez was nowhere, the Red Bull driver down in 16th, 1.8 seconds down on his teammate without any known issue with his car at the time of writing.

The McLarens were lowly in FP1, with Lando Norris 11th and Daniel Ricciardo 14th and apparently yet to fire their big bullets.

AlphaTauri drivers Yuki Tusnoda spun, and later the team reported a technical issue that limited the rookie to three laps. Not a good way to get his weekend going. 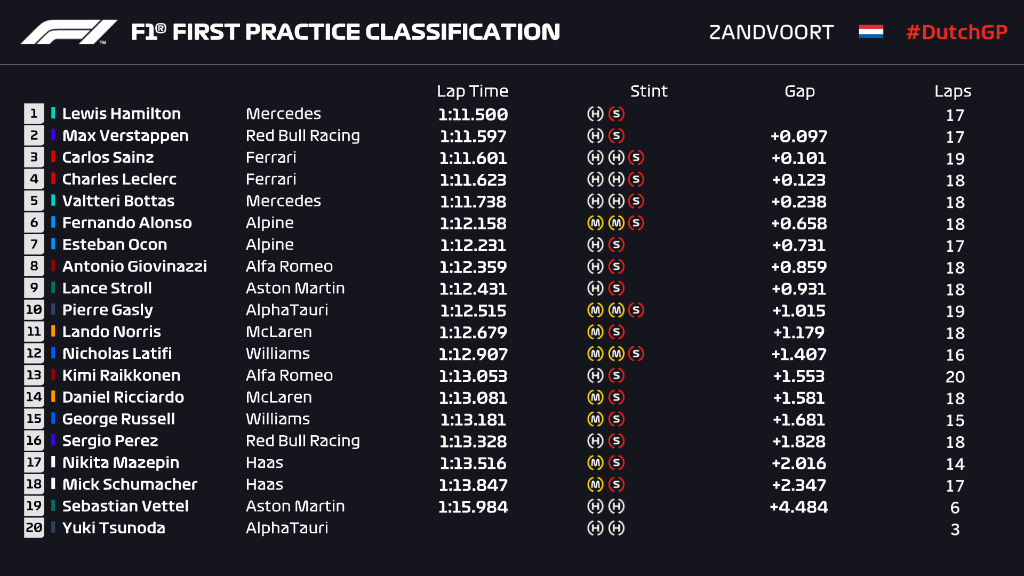