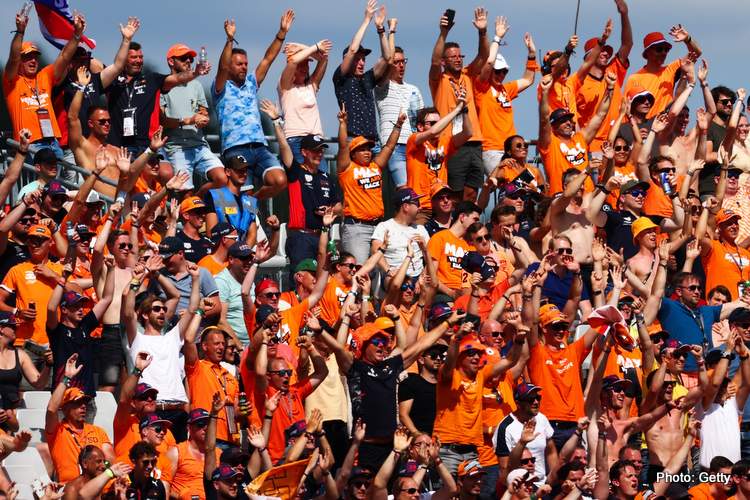 Max Verstappen will not tell his home crowd how to behave at this Sunday’s Dutch Grand Prix, even if they jeer Lewis Hamilton more than at previous races.

While Verstappen will be cheered on by raucous supporters, Hamilton will be playing away from home on his rival’s home patch with the Orange Army in full force.

“Well, I look at it like this. When you go to a football match, you come to a home ground and the opposition will be booed at some point. You can’t go on the speakers and tell the home crowd ‘Don’t boo,'” Verstappen said Thursday at Zandvoort.

Things could get even more hostile considering Hamilton has been whistled and jeered by Verstappen’s fans ever since he knocked him out of the British Grand Prix in July.

The first-lap incident at Silverstone saw Hamilton making a risky overtake move on race leader Verstappen and clipping the side of his car, causing the Dutch driver to crash out of the race. He scored no points while Hamilton won — despite a 10-second time penalty — to trim Verstappen’s overall lead.

Verstappen felt that the way Hamilton and his Mercedes team celebrated that British Grand Prix victory was disrespectful, considering he was in the hospital having checks.

Hamilton was loudly jeered by Dutch fans at the podium ceremony at Silverstone and subsequently at the Hungarian Grand Prix — where Hamilton moved into the championship lead — and the Belgian Grand Prix last weekend.

With F1 returning to the Netherlands for the first time since 1985, tens of thousands of orange-clad Dutch fans will be expected every day.

Verstappen calls them his “Orange Army” but just hopes the hostility does not go too far.

“As long as it doesn’t affect Lewis, that’s the most important thing,” he said. “It’s going to be great to see fans here, even though it’s not going to full capacity.”

While Hamilton does not agree with jeering, he accepts it’s part of sport.

“It’s naturally something you could expect. I’ve never been someone that would go to an event and boo, but I understand it,” Hamilton said. “You see it at football events, it’s just the passion the fans have or the dislike they have of their opponents. But I respect it.”

He says getting jeered works in his favour: “I try to turn that energy they propel towards me into something positive.”

After last weekend’s rain-soaked Belgian GP, which was won by Verstappen after a few laps behind a safety car, fans will be eagerly anticipating a proper race this Sunday on a circuit that first hosted a race in 1952.

The undulating 4.3-kilometre (2.7-mile) track is located at a seaside resort town just outside of Amsterdam. Rising and falling through dunes, it is fast with banked turns of up to 18 degrees offering plenty of chances for overtaking.

“Everyone is interested in the banked corners,” Verstappen said. “It gives you more opportunity in what lines you can take. When you make a mistake, you can get punished. We don’t know how we’re going to react to it, because with banked corners the car wants to pull itself down.”

The Red Bull driver is only three points behind Hamilton in the standings and could move ahead on Sunday. Hamilton is chasing a record-extending 100th F1 win.

All three drivers on the podium will get the first-ever F1 trophy made entirely from recycled materials. It is a replica of the one awarded at Zandvoort in 1939 and is made from recycled beer bottles, plastic and plywood.