For The Record: What drivers said of Spa shambles 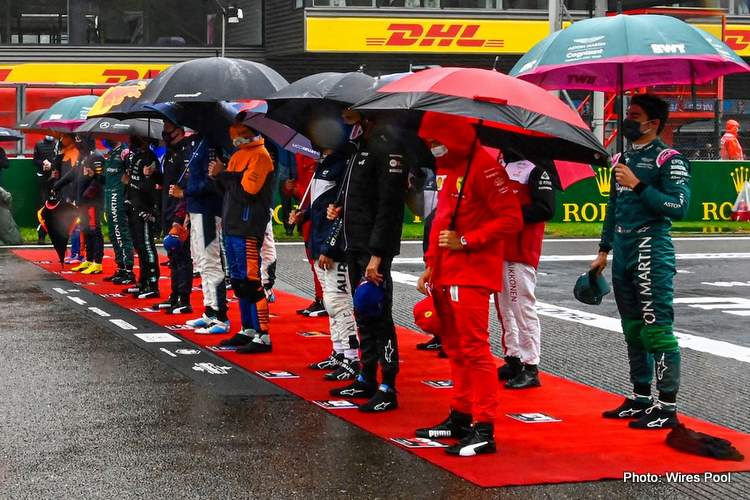 In the aftermath of a truly forgettable 2021 Belgian Grand Prix race day and to give closure to the race that never was it is fitting to canvas the opinions of Formula 1 drivers involved in the fiasco on Sunday.

While Max Verstappen, at the head of the field behind the safety car and unaffected by the thick spray, was keen to race but he later realised it would have been nuts to do so, because behind him no one could see further than the end of the cockpit of their cars, on a very slippery surface was a recipe for a disaster.

Rightfully so the folly was called off before metal was bent but without a race lap being run, yet the powers that be felt it wise to award points for following the safety car, which is the real bone of contention that triggered derision from many quarters, including most of the drivers themselves.

Here is what they had to say after a miserable Sunday at Spa-Francorchamps:

Lewis Hamilton: “We should have called it quits, not risked drivers and most importantly refunded fans who are the heart of our sport. There was no moment when we would have been able to race. Money talks. It was literally the two laps to start the race. The sport made a bad choice. I don’t know all the politics in the background, but my biggest concern is the fans probably should get their money back and, I don’t know if, by doing those two laps means they don’t. We have better values than that as a sport.”

Sebastian Vettel: “It’s a bit of a joke, no? That’s a joke. If you want to get a reward for qualifying, you should get points for qualifying. What did we do? I don’t know. I thought you had to do 25 percent of the race to get points? I think the priority is always we are safe. Tough decisions, not easy hanging in there, making the people wait. But as I said, probably the right decision. It doesn’t get any better and it was getting dark.”

Fernando Alonso: “The only thing that I don’t agree with is why they did two laps and give the points because we didn’t race and we didn’t have the chance to score points. I am P11. I didn’t have any green-light laps to score a point and we didn’t score so that is shocking but it is their decision. There was no way we could race, as we showed. It was only a red-flag situation or a behind-the-safety-car situation as we did. So how can you give points for a non-race? I’m P11. I’m the first idiot in a way because I was not allowed to fight for points but they gave the points. “It makes no sense and for many people, it was an early Christmas because there were some gifts given.”

Max Verstappen: “I thought maybe at 15:30 the conditions were a bit better than just now when we tried to re-start but the visibility was still very low and I understand why we couldn’t race. For me in the lead the visibility was a lot better, even with the Safety Car ahead, but the guys behind me couldn’t see a single thing and if someone went off at Eau Rouge and bounced back onto the track they could have been T-boned at high speed which we do not want. It was also extremely low grip and because it kept raining all afternoon it just didn’t improve. I think the big credit goes to the fans around the track who stayed here the whole day in the rain, wind and cold. It must have been horrible to sit in those conditions so a big thanks goes to them and they should be the real winners.”

Carlos Sainz: “Visibility was zero in tenth place. In my opinion, it was the right decision not to race. The conditions were just not good enough to drive a Formula 1 car. So I don’t agree with the comments people make at home that today’s Formula 1 drivers are not taking any risks. Nonsense, because the chance of an accident was high if we had had a restart. That was not the case, we have to accept that. I’m sorry for the fans, but it was just too difficult and unfortunately, there was no race. It is what it is. We struggled a bit in qualifying and there was no race. I got half a point for something I didn’t deserve half a point for. I didn’t race to earn half a point. That might be the only thing we need to revise, because handing out points for something we didn’t have. That doesn’t make sense.”

Charles Leclerc: “It’s a strange end to the weekend, not having had a proper race. Most of all, it’s a shame for all the fans who came out to see us race. I’d like to thank everyone who stayed in the grandstands hoping that the conditions will improve. It surely wasn’t easy and I have massive respect for every single person who stayed here with us. The track conditions weren’t that bad in terms of standing water, but in terms of visibility, it was a disaster. I couldn’t see anything ahead and it was a good call to make sure we are all safe given the gravity of the rain.”

Daniel Ricciardo: “Crazy, crazy day, crazy circumstances. It’s lucky we don’t get these situations very often but it is what it is. Sorry to the fans and everyone that stayed out here all day to watch us race, they were awesome. We were really hoping to get a race and obviously it didn’t happen, but it’s no one’s fault, it’s just the situation and circumstances.”

Lando Norris: “I don’t think any points should be awarded. How little we did, I think [it’s OK if it was] X amount of actual racing laps, like we go out and we race for X amount of the race, but to drive around behind the safety car and for people to get points? Maybe I’ll be saying the opposite if I was first, on a good amount of points. Even though it’s benefited us, Daniel got a good amount of points compared to Ferrari, I don’t think it was a race deserving of points, because it wasn’t a race at the end of the day.”

Valtteri Bottas: “It’s a huge shame, of course, that we couldn’t race and there were many committed fans out there, waiting for us to get started but we couldn’t. They were still smiling throughout and in good spirits, so hats off to them.”

Sergio Perez: “It was a strange afternoon and I have to say thank you to the fans, they were incredible for staying with us in the rain and cold. It’s a shame we couldn’t put on a good race for them but we as a sport tried our best to race but it just wasn’t possible. The lap to grid was my mistake, the conditions and visibility were extremely poor and I just went on the kerb and lost it.”

Esteban Ocon: “Firstly, I feel sorry for all the fans out there at the track. Thank you to them for their patience and their enthusiasm at waiting all afternoon to see some action. Unfortunately, it just wasn’t possible with the rain, and safety has to be the priority. The correct decision was made to stop the race, so credit to the FIA and Michael Masi for trying their best and making the right call in the end. The conditions were really tough out there, especially the lack of visibility.”

Lance Stroll: “It is a real shame for the fans. I am sorry they waited all afternoon for a race that ended in the sad way it did. We cannot control the weather and safety must come first. It is a tough decision for the FIA and Formula One to make, but it was the right one. Visibility out on track was really bad. It is not a nice feeling to be on sections like the Kemmel Straight, where it is so fast, and you cannot see in front of you because of the spray.”

George Russell: “The conditions were incredibly difficult out there and even in second with only one car in front, sometimes I couldn’t even see Max (Verstappen) ahead. I’m really sorry for everyone at the track and those watching around the world that we couldn’t race but safety has to come first. It’s a strange feeling as I’ve never had a race finish like this in my career, but a podium is a podium and we will take it no matter what.”

Nicholas Latifi: “This definitely isn’t the way I would have liked to finish the weekend; I know we all would have liked to get out there and go racing, but unfortunately the conditions made it too dangerous. It’s really unfortunate for the fans and I really feel for them having sat out in the cold the whole day, so thank you to everybody who stuck it out.”

Pierre Gasly: “I’m very disappointed that we didn’t get to race. I think we all feel very sorry for the fans that have stayed with us in the rain all day, without any racing and I would like to thank them all for staying until the end. However, the conditions were very extreme, I don’t think I’ve driven in conditions worse than this before. I think that the problem was that if anyone spun in the first lap, there was absolutely no visibility and there would’ve been a big accident. We know how dangerous it can be to race here, so this was absolutely the correct decision.”

Yuki Tsunoda: “It was clearly not possible to race, especially for any drivers from P7 onwards, I think the visibility was just too poor. It would’ve been far too dangerous to race in these conditions, particularly on such a high-speed track like Spa, so for safety I think the FIA made the right decision. Obviously, it’s disappointing on a personal note to not have had the opportunity to race for points, but safety is far more important.”

Mick Schumacher: “It was very frustrating on the one hand, the fact we have been looking forward to the race so much and then not being able to race, but on the other hand, the fans have been out there for so long waiting for the race to go on. They must have been freezing but they stayed out, so thank you very much and sorry that we didn’t manage to show what we had to show. Visibility was the main concern as we couldn’t see a thing.”

Nikita Mazepin: “It could have gone many different ways. When there’s so much water on the track, the visibility – at least from where I was starting, it was very difficult to see. We weren’t going that fast behind the Safety Car, but you just weren’t sure where the car in front of you was, I just had to try and always keep my distance before the rain settled in the air. It wasn’t the best day for us, but I can imagine for the fans it was even more difficult. I could see that some of them didn’t even have umbrellas.”

At the time of writing Alfa Romeo drivers, Kimi Raikkonen and Antonio Giovinazzi had not commented on the aftermath of the ‘race’ but the Swiss team did release a scalding statement claiming the debacle has “hurt” F1 and the sport’s fans in particular.