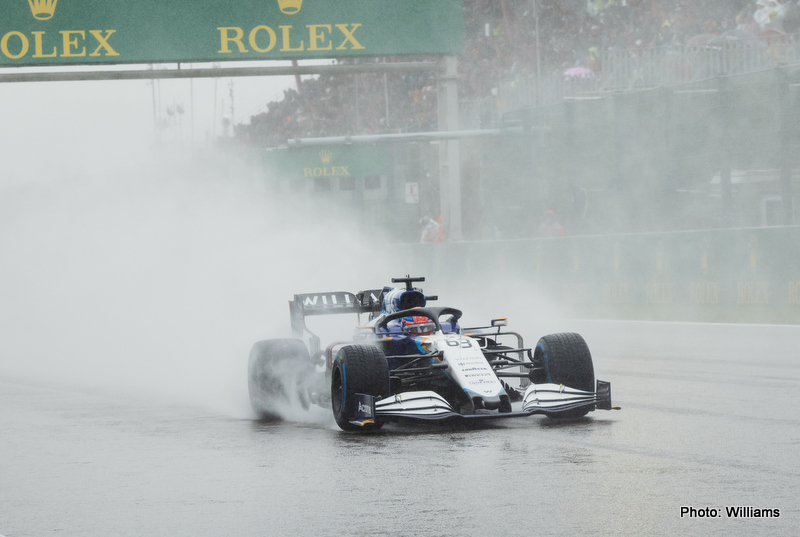 With rain causing havoc at yesterday’s Belgian Grand Prix, the race (if you can call it a race) was completed behind the Safety Car.

With this in mind, what would usually be an article written about a drivers performance across the race weekend as a whole, is now purely a drivers rating across the three qualifying sessions held on Saturday.

But with certain drivers massively out-performing their cars, while others struggling with the tricky conditions, there is still plenty to discuss and give ratings on.

So here we go, my drivers ratings for the 2021 Belgian Grand Prix weekend.

With recent bad-fortune before the summer break, the once 32 point lead at the top of the drivers’ championship was now eight points in favour of title-rival Lewis Hamilton coming into this weekend.

Therefore it was imperative that Verstappen started this weekend strongly, in a bid to reduce the gap at the top of the championship. And with fans filling the banks and grandstands surrounding the Spa-Francorchamps circuit in a sea of orange, their driver came out on top with a hugely impressive 1.59.765.

And with hindsight we all know that this lap ultimately earned Verstappen the race win, it goes to show that qualifying on pole position is far more important than some people make out, especially on unpredictable weekends.

I guess it shouldn’t be the case that the pole sitter is rewarded a 9.5 and second place a 10, but I had to reserve the perfect score to Mr Saturday and Mr Saturday only. WHAT A LAP.

Plaudits are given to George Russell every time he manages to get his Williams car into Q3, given the true potential of the car being far less than basically all the cars on the grid except Hass.

But the idea of a Williams, even in tricky and unpredictable conditions, sitting on the front row for a Formula 1 race just 3 tenths of pole position seemed far too unbelievable to be true.

But I guess we should have learnt by now the talent Russell possesses, and with contract talks still seemingly ongoing about his future and potential move to Mercedes, I think this result all but HAS to earn Russell the Mercedes seat for 2022.

Having gone purple in the final sector, it was the start of the lap which really knocked back Lewis in the fight for pole, as he was half-second off the pace of Russell in the first sector alone.

However with less than 75% of the race being completed, only half points were given to the Top 10 finishers. So I guess Hamilton may not feel too sour after what he called a “farce” of a weekend, with his lead only being reduced from eight points down to three.

This weekend feels like a potential turning point in the season for Daniel Ricciardo.

With his season-best P4 on Saturday, fortunes have gone in favour of the Australian driver this weekend after hard-work was undertaken over the summer break to try and rectify the poor start to life at McLaren.

Having looked like potentially missing out on Q3, Ricciardo scrapped in at P9 at the end of Q2. But with conditions worsening going into the final session, the skill level we know Daniel has came out in all it’s glory, popping his car P4 semi under the radar amid all the chaos out front.

It’s just great to see Daniel back at the top end of the grid, and I like I’m sure many others hope these result continue into the second half of the season.

But although this result was superb for the German driver, Sebastian gets a 9.5 purely for this actions after McLaren driver Lando Norris crashed at the beginning of Q3.

Seb time and time again shows why he is the nicest and most caring man in F1, and that we are lucky to have him in our sport. He calls out the FIA when he feels like they are in the wrong, and immediately goes over to Lando making sure that the young Brit was okay. Sebastian Vettel, what a man.

We as F1 fans have all become accustomed to seeing Pierre Gasly outqualify his teammate this season with excellent Saturday drives. This weekend was no different.

The consistency from Pierre to qualify in the top 6 across all forms of racetracks is staggering and gives huge justification as to why the Frenchman has such high acclaim from fans across the world.

Probably still high from his maiden F1 victory last time round in Hungary, ultimately it was a solid weekend for Ocon.

This now also brings him level with teammate Fernando Alonso for qualifying results this season, showing he is able to match the two-time world champion. And yes, even if Alonso is older than he once was, at Hungary it showed he is still very much a class above most.

A return to the track where Charles Leclerc won his maiden race back in 2019 proved to have mixed emotions. Having missed out on Q3 alongside teammate Carlos Sainz, Charles finished Sunday’s ‘race’ in eighth position due to penalties for Bottas and Norris, and Sergio Perez’s pre-race crash.

So although the pace was not there for Charles and Ferrari this weekend, they will be grateful to the points given the poor Saturday showing.

Although being massively overshadowed by teammate George Russell for obvious reasons, Latifi can be incredibly proud of his efforts at Belgium this weekend.

He like Leclerc and Sainz were rewarded points finishes due to other driver errors, but he was only in this position to capitalise on this after an excellent Q2 lap.

With a points score this weekend, it also gives Williams back-to-back weekends where they scored points with both cars, a huge achievement and one where Latifi has played a huge part in and deserves more credit than I think he gets.

He gets half a point less than his teammate because he qualified two places further down the grid, but like Charles he will be grateful for the half-point he gets from this weekend having struggled for pace in FP2 and FP3. They all add up and at the end of the season might be worth millions in the constructors battle with McLaren.

Like his teammate Ocon, just an average weekend for the Alpine driver. Alonso struggled in Q1 and barely made it out, ultimately qualifying in P14.

However I’m willing to let this weekend slip for Alonso, as I’m still in awe of his driving from Hungary if I’m honest.

Although his five-place grid penalty from the incident caused at the Hungarian Grand Prix placing him outside the points in 12th for this weekend, he could have still scored points if he qualified better than 8th.

His time of 2.02.164 in Q3 was two seconds behind his teammate Hamilton, and with contract negotiations for next year’s Mercedes seat still up for grabs, and rival for the seat Russell doing so well, could this performance be far worse for Bottas than just finishing P12?

Out in Q1 is something not a surprise for the Alfa Romeo drivers, so I guess this weekend was just bang average for Giovinazzi. However he did manage to beat teammate Kimi Raikkonen by two seconds so that gets him the extra 0.5 on the score.

This feels like a what could have been weekend for Lando Norris.

Having looked super quick in Q1 and Q2, the chances on Lando sticking his car on pole position would have been at good odds. But with weather changes for the worse going into the final session, he was pushing just that but to hard going up Raidillon and into Eau Rouge, spinning into the barrier.

And although it was great to see Lando jump out the car and be passed okay by the medical team, you feel it’s a huge chance missed by pushing just that too hard.

And as we learnt with Max getting the race win ultimately for his qualifying lap, as important as it is to push the car to the absolute limit, just making sure you get a lap in is even more crucial.

Another incredibly frustrating display from Yuki Tsunoda this weekend, not even making it out of Q1. And with his teammate Gasly consistently doing well in Q3, its obvious to see the difference between the two Alpha Tauri drivers.

Yes, Tsunoda is a rookie and we should give him some slack, but everyone knows the talent this young driver has and if he doesn’t start to consistently show it sooner rather than later I fear that in an everchanging sport and under the watch of an organisation that change their drivers freely, his days in F1 might be soon over.

You cannot really except much from the Hass drivers given their car is the slowest on the grid, but this was another weekend where Mick Schumacher out-qualified his teammate Nikita Mazepin, so that’s a good sign for the young German driver.

Also on a side not the feature on Sky Sports F1 where Mick drives his fathers Jordan 191 car was a beautiful moment and very touching to witness.

I had to score Mazepin less than Schumacher as he was out-qualified by him, but Mazepin got fastest lap and so he deserves the extra 0.5 on the score, even if the award was essentially meaningless.

A poor weekend by Raikkonen as he was like Mazepin out-qualified by his teammate. But with Raikkonen I think he did well just to stay at Spa during Sundays antics, and I’d expect nothing less than Kimi to say he’s had enough and head to the nearest pub. So well done Raikkonen for sticking through it with the rest of us.

A poor weekend topped off with his five-place grid penalty from causing a crash at Hungary last time round was enough as their needs to be said about Lance Stroll. Certainly one to forget and onto the next.

Let me know in the comments down below how you would rate the drivers from this weekend’s 2021 Belgium Grand Prix.

After an average P7 after Q3, it would have been guaranteed points for Perez and the team but for a crash on the out lap getting to the grid.

A lapse in concentration caused a crash at Turn 8 which initially disqualified him, but with amazing work from the Red Bull mechanics he was able to join in the procession behind the Safety Car.

Perez ultimately missed out on a guaranteed three points for the team had he not crashed, and so its only fair I score him so low as these three points could potentially hand Mercedes P1 in the constructors’ championship, and for a mistake like that is unforgivable.