Seidl: Norris will be back racing 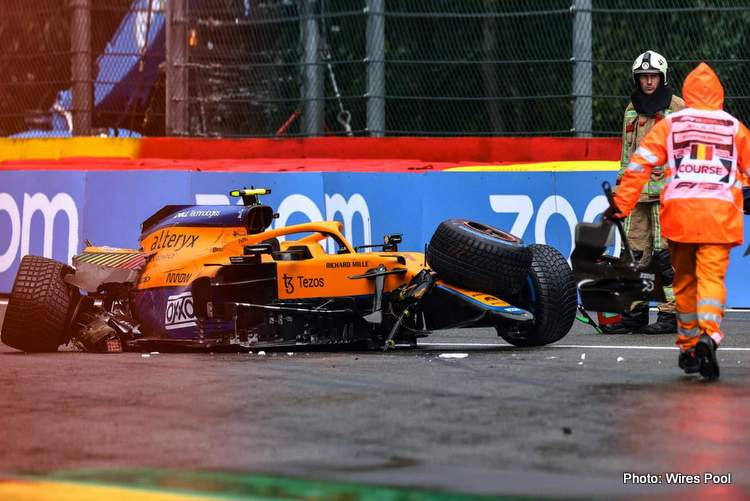 Formula 1 driver Lando Norris has been cleared to race in the 2021 Belgian Grand Prix, after walking away from a high impact crash at a rain-soaked Spa-Francorchamps during qualifying on Saturday.

The 21-year-old, whose McLaren snapped out of control through the uphill sweep of the fast Eau Rouge corner, slammed into the barriers during for the final pole-position shootout phase of the hour-long session.

He was taken to the medical centre for precautionary checks before being given the all-clear. The crash forced a 42-minute halt to the session.

“Everything is good and he is cleared,” his team boss Andreas Seidl told reporters in a video conference. “He will be back racing tomorrow.”

Norris, who emerged as the man to beat in the tricky conditions, had led the first two phases of qualifying, was the first driver to attempt a flying lap during the Q3 which got underway just as the rain began to fall harder.

Four-time F1 world champion Sebastian Vettel, also out on track in his Aston Martin, had radioed his team calling for the session to be halted.

Norris, who was classified 10th but could be hit with penalties or even start from the pitlane because of the extent of the repairs, also complained about the conditions.

“What did I fucking say? What did I say? Red flag,” an angry Vettel, who pulled up alongside Norris’ stricken McLaren to check if he was okay, said on the team radio.

The incident intensified scrutiny surrounding the Raidillon-Eau Rouge sequence of corners after six drivers from the all-female W Series escaped injury in a six-car pile up on Friday at the same part of the track.

Frenchman Anthoine Hubert lost his life after a high-speed Formula 2 crash at the same corner two years ago, while Williams F1 reserve Jack Aitken suffered a broken collarbone in a crash at the same place in the Spa 24 Hours race in July.

Safety improvements to the corner are planned with the drivers shown illustrations of the plans on Friday.

“Racing is never going to be fully safe,” said Red Bull pole-sitter Max Verstappen on Saturday. “But of course there are a few things around that corner which can be helped and they are doing that, so I think it’s going to be a lot better.”

Championship leader Lewis Hamilton on Friday said the corner had been ruined by a bump at its entry.

“That was all that needed fixing,” explained the World Champion. “They’ve just got to get rid of the bump and then leave Eau Rouge as it is. But they’ll do what they do.” (Reporting by Abhishek Takle)