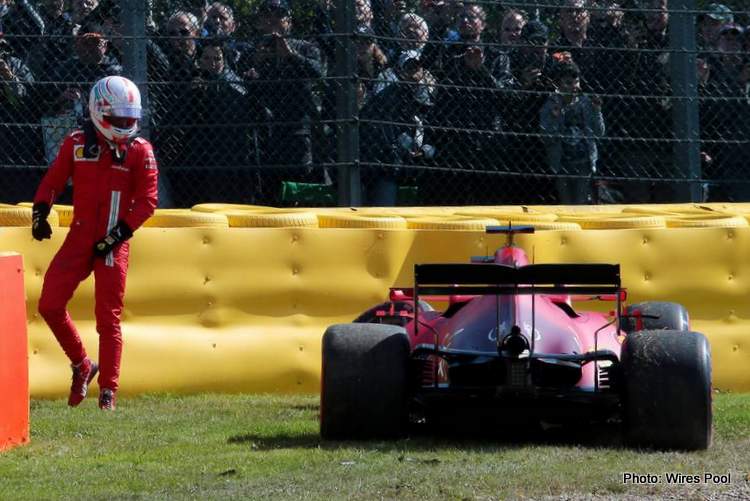 “Touching the wall” is how Charles Leclerc described the FP2 prang he suffered at Spa-Francorchamps on Friday, the “touch” has forced Ferrari to provide him with a new chassis for the Belgian Grand Prix.

Leclerc pushing hard in the afternoon session yesterday lost control of the SF21 at Les Combes and smacked the barrier on the outside of the track, the front left of the Ferrari bent and damaged.

His team confirmed today: “Scuderia Ferrari announces that following the incident in the second part of FP2, the chassis of Charles Leclerc’s SF21 sustained damage that cannot be repaired in a short space of time.

“Therefore, yesterday evening (Friday) a spare chassis was built up and Leclerc will use this as from the third free practice session of the Belgian Grand Prix.”

Leclerc said of his mishap: “It wasn’t great to finish the first day by touching the wall, but tomorrow and Sunday will be the days that count and I will make sure to learn from my mistake.

“The track conditions were tricky but it was the same for everyone. It looks like it will remain like this for the rest of the weekend, so we have to get used to it,” added the Monegasque who won his first F1 race when he triumphed at Spa in 2019.

Friday was not a good day for the Reds with Carlos Sainz only good for 11th in the sister car, signalling a great deal of work required by the Italian team to get them closer to the sharp end of proceedings.

Meanwhile, Ferrari F1 boss Mattia Binotto hinted at a new spec engine set to be tried by his team before the end of the season: “When is not yet decided, we’re running it at the dyno, completing the homologation.

“We know it will come before the end of the season. For us, it was important as well in the view of 2022, because whatever we bring as upgrades can be useful in terms of experience for next year. It’s not coming so soon.

“It’s not for the next two, three races. But certainly, a significant upgrade is on the hybrid side,” added Binotto whose team is tied third, with McLaren, in the F1 constructors’ championship ahead of Round 12 in Belgium on Sunday.