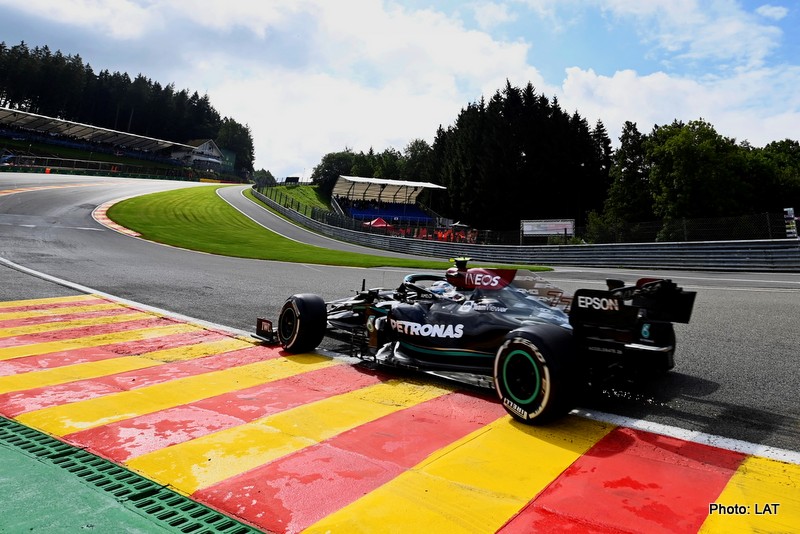 Pierre Gasly rounded out the top three for AlphaTauri, while championship leader Lewis Hamilton was a surprise 18th.

The session started out under cloudy skies and the drivers opted for the intermediate tyres early on as a result.

However, the surface quickly dried out and teams began moving to the medium and hard compounds, with the drivers bedding in after almost a month off.

Kimi Raikkonen and Yuki Tsunoda had a little difficulty as they both brought out the yellow flags following spins, but things quickly settled down soon after.

Verstappen did not set a time until 30 minutes had elapsed but immediately went to the top of the leaderboard on the hards, surpassing early leader Esteban Ocon’s best effort on the mediums.

Sergio Perez slipped into second moments later, while Hamilton complained over team radio of a lack of speed on the straights as he languished in P14 during the long runs.

Verstappen though continued to impress on the hard tyres, with Dutchman extending his advantage at the front to 1.262 seconds with just over 20 minutes remaining.

Rivals began eating into his lead late on in the session as they strapped on the softer compounds and Valtteri Bottas jumped up to the top of the standings with just over 10 minutes remaining, setting a time of 1.45.199 in the process.

Verstappen managed to improve his own time on the softs back had to settle for second, while Gasly was able to leapfrog both Ferraris into third.

Charles Leclerc was fourth and Carlos Sainz was fifth, the former having survived a close shave at Turn 7 where he dipped his wheel into the gravel.

Perez was sixth, almost a second back from his teammate Verstappen, while Sebastian Vettel was the lead Aston Martin in seventh.

Lando Norris ended up eighth for McLaren, while the Alpine duo of Ocon and Fernando Alonso rounded out the top 10.

Lance Stroll was 11th, Daniel Ricciardo was 12th and Antonio Giovinazzi was 13th, just ahead of George Russell, the driver he was involved in an incident with at this circuit last year.

Tsunoda was 15th after his early spin, with Nicholas Latifi 16th.

Raikkonen had a spin of his own and then collided with the wall as he entered the pit lane on his way to 17th.

Hamilton was 18th after a disappointing session, the seven-time world champion held up by Latifi on his soft tyre flying lap towards the end of the session.

His complaints of a lack of straight-line speed will have been noted and it would be no surprise to see an alteration made ahead of FP2.

Finally, Haas duo Nikita Mazepin and Mick Schumacher rounded out the field, with Schumacher wearing a replica of his father’s helmet from this circuit back in 1991. 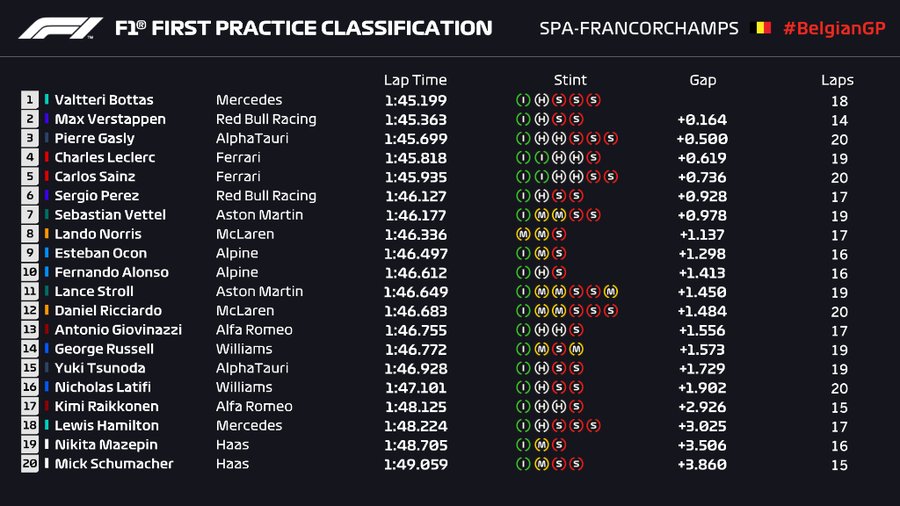