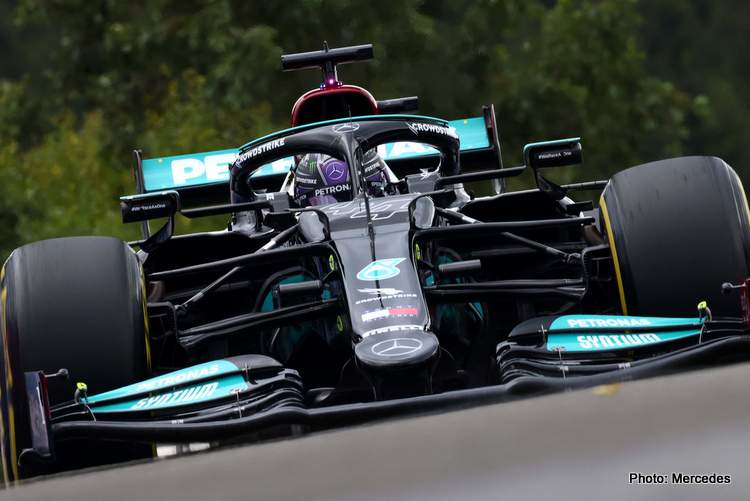 Lewis Hamilton ended FP1 down in 18th, nearly a full second adrift of Mercedes teammate Valtteri Bottas, as the world champ struggled to find the right setup on day one of the 2021 Belgian Grand Prix weekend.

In FP2, Hamilton bounced back to claim the third-fastest time on Friday at Spa-Francorchamps, albeit a mere 0.072s shy of Verstappen’s table-topping, best effort and Bottas between the contenders! Very, very close at the top.

The reigning Formula 1 World Champion reported at the end of the day: “Finding the right balance here is a big challenge. In FP1, we tried one way, and then we changed it this afternoon.

“The pace was quite similar – you try one option, and you are faster in the first and third sectors, but slower in the middle. And then you try the other option and it’s the opposite. So, figuring out the right balance is really tricky.

“It’s also tough to gain knowledge in these short sessions but we’re navigating it the best we can and at least it was dry for most of the running. Overall, it was an okay day, but I didn’t quite have the car underneath me, so we’ve got some work to do tonight to figure that out.

“The weather is also going to play a big role. If it does rain, you obviously want more downforce, but then if it doesn’t rain, you are a sitting duck on the straights. So we have to be very careful with the changes we make<” explained Hamilton.

Bottas, who was second quickest, added: “Everything felt pretty good out there today. As we saw from the timesheets, it’s going to be very close with Red Bull once again so we’ll look into the detail tonight and see what marginal gains we can find.

“The pace on both the short and the long runs was pretty decent. It’s always tricky to compare in detail from the practice sessions, but at least the feeling is good, so that is a positive start to the weekend.

“We looked quite fast on the straights with the wing level we ran and in the race, it’ll be important for me to be quick in sectors one and three, to make the overtakes.

“But then, if it rains, you want more downforce. So, session by session, we need to see how it is going to look. That decision will be key for Qualifying,” predicted the Finn.

Ahead of Round 12, on Sunday in Belgium, Hamilton leads the F1 drivers’ championship standings by eight points over Red Bull’s Max Verstappen, while Mercedes top the constructors’ race by 12 points.