Palou: We’re going to be going for it 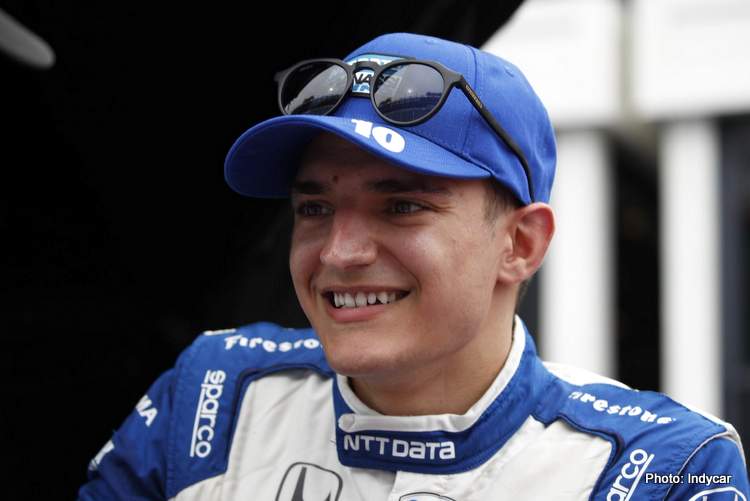 IndyCar Series begins its final month of the 2021 season with a surprising new face – Alex Palou – trying to close out the championship and a careful eye on the spiking COVID-19 numbers across the country.

The Spaniard takes a 21-point lead into Saturday night’s race at World Wide Technology Raceway near St. Louis, the fourth and final oval on the schedule.

He won the season-opener in his debut with Chip Ganassi Racing and he has not fallen lower than third in the standings since in his bid to change the status quo in IndyCar.

Only 62 points separate Palou and four other drivers with four races remaining, and Palou was penalized before he even arrived at Gateway.

The second-year driver exited last week’s race on the road course at Indianapolis with an engine problem while running fourth and Honda chose to change the powerplant in the No. 10 rather than risk another ruined race.

The unapproved change means Palou will start Saturday’s race nine places lower than where he qualifies.

It didn’t seem to bother Palou, the 24-year-old leader of a quartet of young drivers disrupting the usual IndyCar title race. Four drivers 24 or younger have reached victory lane and the group is intent on bumping Scott Dixon and Josef Newgarden from the championship podium.

“I can’t wait to go back to oval racing, especially after the Indy 500 and getting more experience,” said Palou, runner-up to Helio Castroneves in the Indianapolis 500.

Pato O’Ward, like Palou a two-time winner this season, earned his first career victory in May at Texas Motor Speedway and the Mexican has not finished lower than fourth in three oval races this season. He is 21 points behind Palou in the standings.

O’Ward finished second and third at Gateway last season when IndyCar ran a doubleheader on the 1.25-mile oval. He sliced Palou’s points lead in half last weekend and expects to pounce again Saturday night.

“I think we have very strong cars on short ovals,” said Palou. “We’re going to be going for it.”

Dixon, Palou’s teammate, has won four of his six championships in the last eight seasons and split the last four titles with Newgarden of Team Penske. Dixon is third, 34 points behind Palou, while Newgarden is fourth and 55 points back.

The largest deficit overcome by the eventual champion with four races remaining in the last 13 seasons was 59 points by Dario Franchitti in 2010. Dixon overcame 54 points in 2015.

IndyCar takes two weeks off after Gateway before wrapping its season with a three-race West Coast swing through Portland, followed by California stops at Laguna Seca and Long Beach. All three races were canceled last year because of the pandemic.

As cases of COVID-19 have spiked across the country, IndyCar can’t help but be wary of tightened state restrictions disrupting the close of the season. The Long Beach Grand Prix said this week it will require staff and spectators show proof of vaccination or a negative test to enter the Sept. 26 season finale.

Long Beach draws about 100,000 fans over its three-day weekend. California has had some of the tightest restrictions during the pandemic and the city of Long Beach this week mandated face coverings at “mega” outdoor events.

“We’re living day to day with what the requirements are from the standpoint of local and state authorities,” said IndyCar Series owner Roger Penske. “But right now we see a clear path at the moment.”

The final oval race of the season will mark the final IndyCar appearances for two veterans.

Former Formula 1 driver Romain Grosjean, who moved to IndyCar this year but said he’d only race the road and street courses, has fallen in love with the series and relented on his opposition to ovals.

The Frenchman decided to give it a try after watching the Indianapolis 500 on television and tested at Gateway last month in advance of his debut.

“Really feeling like a rookie,” said Grosjean, who is in fact considered an IndyCar rookie and trails Scott McLaughlin by seven points in the race for the top rookie honors. McLaughlin has run all 12 races this season; Grosjean skipped the first three ovals.

Grosjean will have a short learning curve at Gateway, where IndyCar will practice, qualify and race all on Saturday.

“Obviously a lot for me to learn,” Grosjean said. “I think the key word here will be experience through practice to qualifying through the race and just learn how to make the most of an oval experience.”

Both Grosjean and Jimmie Johnson entered IndyCar this year but said they wouldn’t race the ovals, and Johnson now has the same curiosity as Grosjean. The seven-time NASCAR champion plans to test at Texas before the end of the month.

Johnson’s initial deference on ovals gave Tony Kanaan an opening to extend his IndyCar career — the Brazilian has driven Johnson’s No. 48 in his absence and will make his final start of the season Saturday night. Same for veteran Ed Carpenter, who only races the ovals, as well as Grosjean’s oval replacement, Pietro Fittipaldi.

With nine career starts at Gateway, Kanaan has the most experience at the track of any driver in the field. He has two career podium finishes.

Scott Dixon and Josef Newgarden split the Gateway doubleheader last season. The two combined for nine wins in 2020, but each has won just once so far this season.

There have been eight different winners in the last 10 IndyCar races, with only Pato O’Ward and Marcus Ericsson repeating in that stretch.

Will Power won last week at Indianapolis but is still seeking his first pole of the season. He’s won a pole each of the past 12 years and sits five behind Mario Andretti’s record of 67. Power has two previous poles at Gateway. (Report by Jenna Fryer)