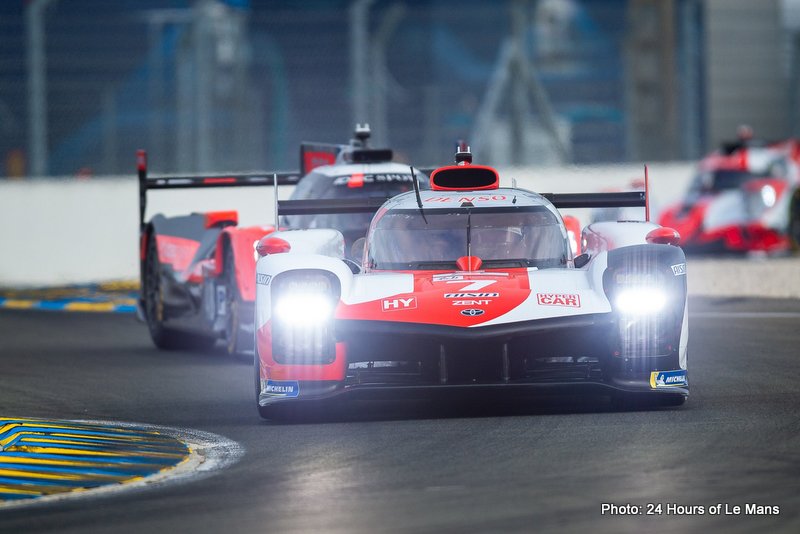 The No.7 Toyota GR010 Hybrid Hypercar driven by Jose Maria Lopez, Kamui Kobayashi and Mike Conway topped the qualifying practice times in the one hour session at Le Mans this evening.

It was again Lopez who clinched the quickest time and stopped the clocks at 3m26.279s, some three seconds quicker than his best free practice effort earlier today.

Ferrari fought back in the LMGTE Pro category with the No.52 488 Evo machine driven by Daniel Serra setting a best lap.

Antonio Felix da Costa fought back from an accident in free practice to head LMP2, while the No.88 Dempsey Proton Porsche 911 topped the LMGTE Am category.

Below are the main headlines from each category.

Hypercar
•    Jose-Maria Lopez sets super quick time of 3m26.279s in No.7 Toyota GR010-Hybrid Hypercar to keep Toyota Gazoo Racing ahead at the top of the times.
•    Alpine ELF Matmut place second once again with Matthieu Vaxiviere 0.8116s off Lopez’s best effort with best of 3m27.095s.
•    The No.8 Toyota driven by Sebastien Buemi, Brendon Hartley and Kazuki Nakajima is third but 1.3s away from sister car.
•    Glickenhaus Racing fourth and fifth as the No.708 leads the No.709 machine in Hypercar class.

LMGTE Am
•    No.88 Dempsey Proton Racing Porsche driven by Julien Andlauer sets a 3m 48.620s best to head LMGTE Am class.
•    No.56 Team Project 1 Porsche driven by Matteo Cairoli had topped the category but his lap of 3m48.905s was deleted for track limit infraction.
•    Ben Barker again impresses for GR Racing as he claims second with a 3m49.100s to take a Porsche 1-2.
•    Cetilar Racing bounce back from practice crash to take third as Antonio Fuoco sets time of 3m49.102s just 0.002s off the GR Porsche.