Norris: Racing Lewis, Max or whoever I can perform well 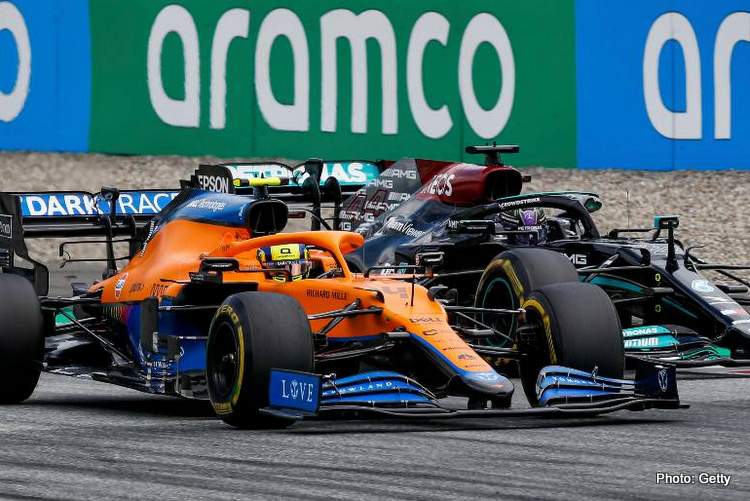 Lando Norris reflected on his battle with Lewis Hamilton during this season’s Austrian Grand Prix, which provided the young star the best classroom he could wish for.

The McLaren driver was able to hold off the quicker and more experienced Mercedes driver for 20 laps at the Red Bull Ring, with Norris eventually fighting back to claim his third podium of the season with a P3 finish behind winner Max Verstappen driving the Red Bull and Valtteri Bottas in the other Mercedes.

A touching fan favourite moment was also shared between the two British drivers, as seven-time F1 World Champion Lewis Hamilton complimented Lando after their battle, saying “such a great driver” to his race engineer over the team radio, knowing full well Lando would be made aware of the comment post-race.

And fighting a seven-time World Champion, Norris feels this experience has given him good foundations to work with when battling against other title contenders in future.

He said: “I think it was valuable, and I think it’s something that will definitely help me out in the future when I’m in those kinds of situations again. It’s just reassuring to know that if I am there in that position again in future, I’m able to compete there and be able to beat him in different scenarios.

“It doesn’t make me believe all of a sudden I can win races and I can achieve greatness. You know, it doesn’t change like that. But it’s just when I’m in that position again, I know what I’m capable of doing against someone like Lewis,” explained Norris.

And with the battle being against one of his driving heroes in Sir Lewis Hamilton, Lando also explained how this slightly differs from battling with other drivers out front on a race day due to the World Champion’s excellent racecraft.

He said: “I don’t think the fact that it was Lewis changes everything, and it’s like: ‘Oh my God, what do I have to do now?’, but it makes a very small difference, because you know he’s one of the best drivers in the world and ever in Formula 1.

“So you know, he’s going to be thinking about every opportunity on how to maximise and how to get past me. So any slip up I have, makes me more vulnerable than if I’m racing against probably anyone else in that situation.

“So it just forces you to be even more perfect, to concentrate even more and things like that. Which I was able to do for 20 laps until I thought, I’m just ruining my own race now and I got to let him go.”

“So yeah, it’s more reassuring, and gives me good confidence in the future when I’m in that position again of I’m racing Lewis or Max or whoever, that I’m comfortable that I can perform well,” added McLaren’s bright star.