Nashville Indycar Qualifying: Herta in league of his own 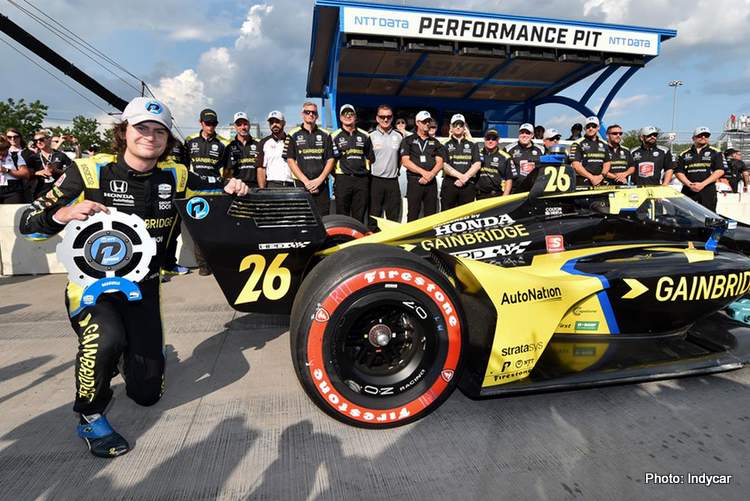 On Saturday after qualifying, mouths were agape and plenty head-scratching going on in the Indycar pit lane after Colton Herta won the NTT P1 Award for the Big Machine Music City Grand Prix on the streets of Nashville, Tennessee.

Herta also earned the Bryan Clauson Pole Trophy for his second pole of the season in the No. 26 Gainbridge Honda, pacing the field by nearly six-tenths of a second with his top lap of 1:13.6835 seconds. Herta led both practices on the 11-turn, 2.17-mile street circuit before qualifying.

“It was a good lap, but what we did in Q1 really helped us there, with being able to transfer on the black tires,” Herta said. “That was the biggest thing. Being fast on the blacks made it just a lot easier for the rest of the way. Great job by everybody.

“The car is fantastic, as you can see what we were able to do on the black (primary tire) laps compared to everybody. We were really in a league of our own. It felt amazing. Good car to take into the race tomorrow, too. Nice and stable.”

Herta earned his sixth career NTT Indycar Series pole and second this season. And this statistic should send chills down his rivals’ spines: Herta has converted his last three NTT P1 Awards into victories, including a win April 25 in the Firestone Grand Prix of St. Petersburg.

Six-time and defending series champion Dixon qualified second at 1:14.2327 in the No. 9 PNC Bank Grow Up Great Honda, joining Herta on the front row. That was a solid comeback for Dixon, who admitted he was a bit spooked early in qualifying after spinning twice in the morning practice on the challenging street circuit.

“It kind of sits in the back of your head,” Dixon said. “In the first two rounds of qualifying, I was taking it a little bit cautious and made sure we converted. I knew the PNC Bank No. 9 was super fast.

“We knew Herta was going to be fast (in the Fast Six) because he was the only guy with new tires. But he’s been quick all weekend, so he definitely deserved that. So, kudos to their group, and we’ll see how tomorrow plays out. Starting on the front row is fantastic.”

The gap of .5492 of a second between Herta and Dixon was the largest between the top two qualifiers in an NTT Indycar Series road or street course race this season, easily besting the margin of .3206 between pole winner Josef Newgarden and Herta for the second race at Belle Isle in Detroit.

Series leader Alex Palou qualified third at 1:14.6316 at Nashville in the No. 10 NTT DATA Honda, but he will start ninth due to a six-spot starting grid penalty for an unapproved engine change after testing last month. 2016 Indianapolis 500 presented by Gainbridge winner Alexander Rossi qualified fourth at 1:14.6646 as one of two Andretti Autosport cars in the top four in a resurgent weekend for the team.

Felix Rosenqvist also continued a strong weekend by qualifying fifth at 1:15.0045 in the No. 7 Arrow McLaren SP Chevrolet, while Indycar rookie Romain Grosjean rounded out the top six in qualifying at 1:15.3980 in the No. 51 Nurtec ODT Honda.

The complex nature of this new circuit, which includes two crossings of the Cumberland River per lap over the Korean War Veterans Memorial Bridge, will force nearly every team into pondering various strategies and tire choices this evening. Dixon, though, already has simplified his approach to the race.

That also probably may be the mantra for championship contender Pato O’Ward, who is second in the series standings, 39 points behind Palou. He qualified ninth in the No. 5 Arrow McLaren SP Chevrolet.

The first two segments of qualifying featured plenty of drama.

Two-time Indycar series champion Newgarden, a Nashville native and resident appeared to be poised to advance to the Firestone Fast Six when he clouted the Turn 11 wall with his No. 2 Hitachi Team Penske Chevrolet with moments left in the second segment.

“I was just trying to make up the deficit from yesterday and today,” Newgarden said. “Pretty pumped for tomorrow. Just wish we were a little higher up. Trying to claw some performance there and just over pushed. You can’t wreck and not get penalized. That’s on me. That’s how it works.”