Sainz: We have higher priorities than beating McLaren to third 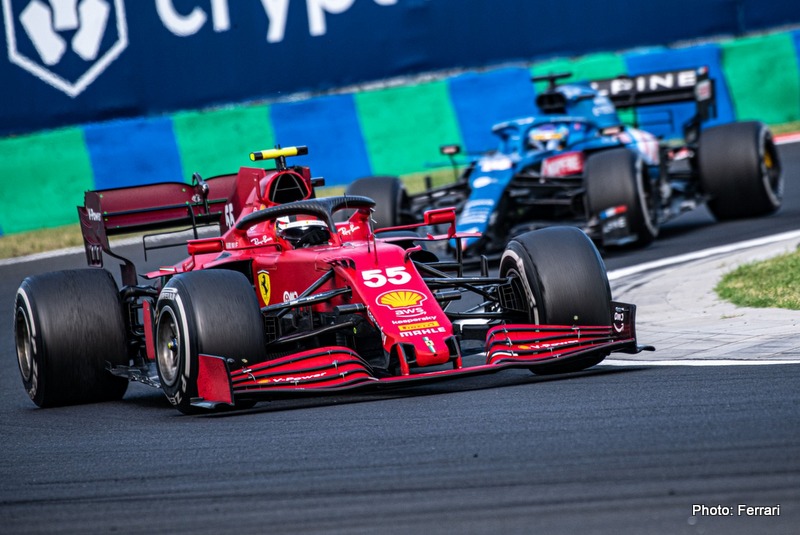 After a hard fought race at last weekend’s Hungarian Grand Prix, Carlos Sainz helped Ferrari draw level on points with rivals McLaren in the battle for third in the Constructors’ Championship.

The former McLaren driver, who initially finished P4 in the race but was promoted up to P3 after Sebastian Vettel’s disqualification, helped the prancing horse score 15 points.

Meanwhile, the Spaniard’s teammate Charles Leclerc and McLaren drivers Lando Norris and Daniel Riccardo went without scoring any points thanks to an incident-packed opening lap.

This leaves both constructors currently on 163 points, with 12 races still to go.

Commenting on Ferrari’s priorities to improve and their battle this season with McLaren, Sainz said: “The battle is still on and it’s always going to be until the end of the season, I think, because we are very close in performance.

“So first comes the improvements as a team and then really the other one should fall as a consequence. But we are not really obsessed with the fight, and we are focused fully on trying to improve and trying to be the best thing that we can before the end of the season.”

Furthermore, Sainz has spoken about the future ambitions for himself and the team to be fighting further up the field on a more regular basis, as he said: “But as a team, we have higher priorities than beating McLaren to third in the constructors.

“I think we want to keep improving as a team and we want to keep building this team to try and be as professional and as good, as complete as we can for the opportunity to come next year to go and win the title, (then) we are ready for it,” Sainz concluded.