Hakkinen: In one race Fernando Alonso has repaid Alpine 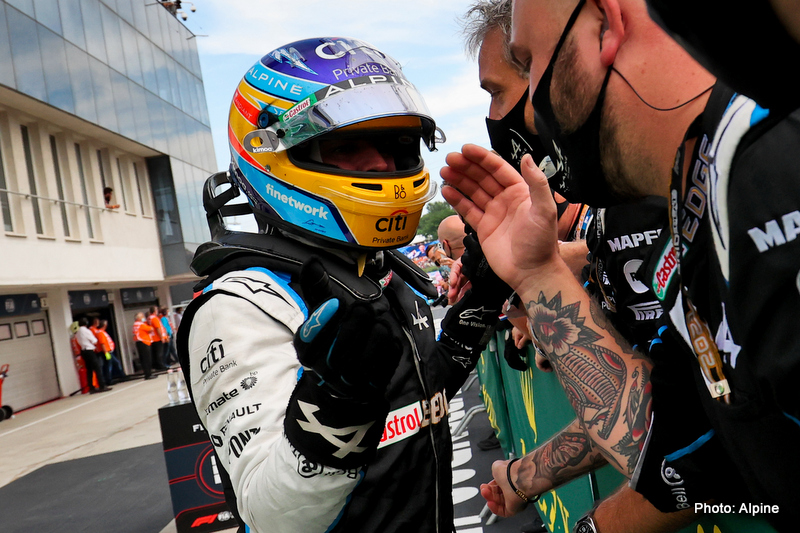 Mika Hakkinen hailed Fernando Alonso for the role he played in Esteban Ocon’s surprise victory at the Hungarian Grand Prix on Sunday.

In the final race before the summer break, a wet Hungaroring threw up a surprise result, with Ocon leading Sebastian Vettel over the line, only for the German to be disqualified after failing to supply a large enough fuel sample.

Lewis Hamilton ended up second, taking the championship lead in the process, while Max Verstappen could only get his damage Red Bull into ninth after Valtteri Bottas caused a four-car crash on the opening lap.

Verstappen and Ocon can both thank Alonso for stopping Hamilton from claiming the win, with the Spaniard able to hold up the Mercedes man for eight laps as he sought to gain ground through the field.

“The first corner accident had a big impact on the race and the World Championship,” Hakkinen wrote in his weekly Unibet column. “Valtteri has accepted it was his mistake, an easy one to make in wet conditions, but it was a real pity to see Lando Norris taken out after making such a great start from P6 in his McLaren.

“It was the damage caused to Red Bull’s cars that really changed the race and the championship. With Sergio Perez out of the race and Max’s car suffering a lot of damage it’s actually a miracle that he finished the race and scored points. This was a very difficult day for the team.

“Like everyone  else I have never seen one car line up on the grid before, so it was really extraordinary to see Lewis Hamilton on his own after the red-flag restart. The team should really have pitted him so that he could switch tyres like everyone else, and when he fell down to last place it seemed impossible that he could still score a podium finish.

“But Lewis loves a challenge, particularly a recovery drive. I really believe he would have won the race had Fernando Alonso not managed to keep him behind. When you consider that Lewis finished the race 4.5 seconds behind Esteban Ocon, and was lapping so much faster, Alpine really can thank Fernando for using all his experience to keep the Mercedes behind. That was a really fascinating duel to watch. In one race Fernando has repaid Alpine for the faith they have shown in him.”

The win for Ocon and Alpine was the first victory for a French driver in a French car since Alain Prost won the 1983 Austrian Grand Prix with Renault.

Reflecting on the achievement, Hakkinen added: “I think it is brilliant that Alpine have won a Grand Prix. The last time a French car and engine won race was with Alain Prost at Renault in 1983, so this is a very special moment for Alpine – in its first season for the brand in F1 – and for the Renault Group. It will really give the team an enormous boost, and is a perfect result for Ocon after recently signing a new three year contract.”

His verdict on the championship battle: “A race win in Silverstone and podium finish for Lewis Hamilton in Hungary have put him back in charge of the World Championship, while Max Verstappen crash at the British Grand Prix has now been followed by a very difficult race and just one more championship point.

“It is too difficult to predict which team and driver combination will win the World Championship. In two weeks the balance has shifted and I think we are going to see plenty more changing fortunes in the second half of the season,” Hakkinen concluded.