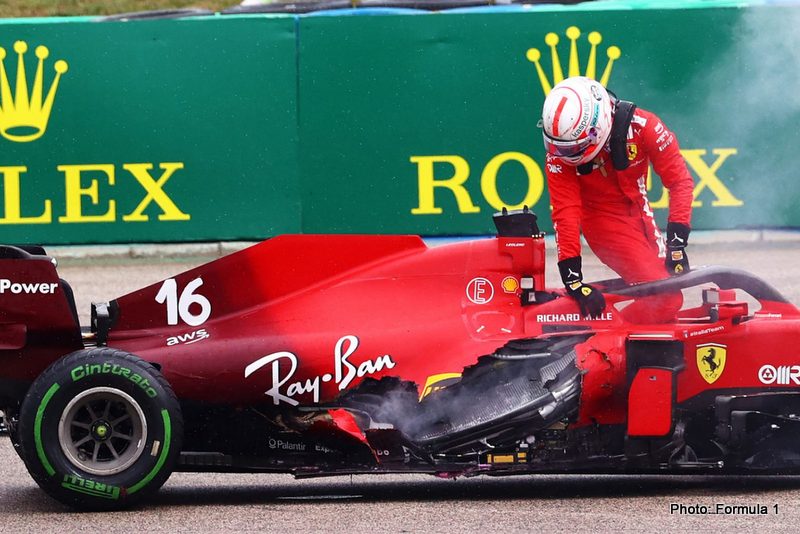 Ferrari have confirmed that engine used by Charles Leclerc during the Hungarian Grand Prix was “irreparably damaged” following his first lap collision with Lance Stroll.

The collision led to Leclerc being forced to retire, with Stroll picking up a five-place grid penalty to be applied at the Belgian Grand Prix later this month.

The impact of the damage could result in a grid penalty for Ferrari down the line though, with the team revealing that it is now more likely they will be “obliged to fit a fourth ICE” on Leclerc’s car before the end of the season.

The current limit is three, with 12 races remaining in the 2021 Formula 1 season.

“Examination of the number 16 SF21 carried out yesterday in Maranello revealed that on top of the crash damage, the engine was irreparably damaged and cannot be used again, following the impact from Lance Stroll’s Aston Martin,” a Ferrari statement read.

“This is a further blow for Scuderia Ferrari and the Monegasque driver. This damage has a financial impact and also racing ramifications, given that over the remaining 12 race weekends this season, it is highly likely the team could be obliged to fit a fourth ICE to Charles’ SF21, thus incurring grid penalties.”

The sport is now on a three-week hiatus, before returning in late August at Spa.