Horner: There is no doubt that this has cost us a lot 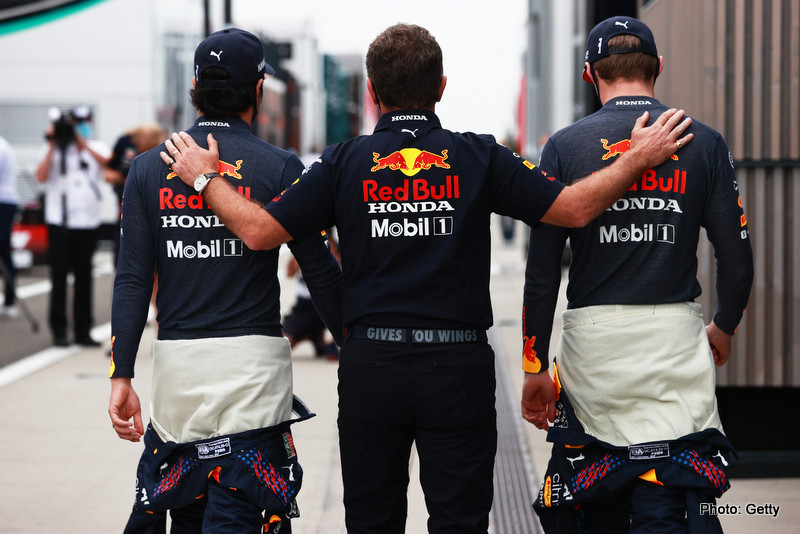 Christian Horner described the Hungarian Grand Prix as “extremely frustrating” after both Red Bull drivers were caught up in a first lap collision.

With Max Verstappen starting third and Sergio Perez fourth, they both got the jump on P2 man Valtteri Bottas at the start, before the Finn missed his braking point and went into the back of Lando Norris.

Norris then collided with Verstappen, while Bottas continued and took out Perez, with Bottas, Norris and Perez all forced to retire.

Verstappen was able to continue but with significant damage, and struggled to move through the field as a result.

The Dutchman finished 10th on the road, before being promoted to ninth after Sebastian Vettel was disqualified.

Lewis Hamilton ended up taking 18 points in second, again thanks to Vettel’s disqualification, giving him the championship lead, while Mercedes also took the lead in the constructors’ standings.

The past two races have been understandably difficult for Horner and the whole Red Bull team to take, but the team principal was trying to look on the bright side, with 11 races still remaining.

“It is obviously an enormously frustrating way to end the weekend but we are within 10 points of first place in the championship going into the summer break which means it’s all to play for,” he said after the race.

“Unfortunately, Bottas braking late into Turn 1 eliminated both of our cars, Checo was immediately forced to retire and the substantial amount of damage to the right hand side of Max’s car meant he had no chance of fighting at the front.”

Horner said ahead of the Hungarian Grand Prix that the crash involving Verstappen at Silverstone cost the team $1.8 million and this weekend has only added to those concerns.

“There is no doubt that this has cost us a lot today, financially in a cost cap world, points wise and for Honda who now need to understand whether Checo’s engine is salvageable, but there are many positives to take into the summer break,” he added.

“We have achieved six victories with the most competitive chassis and power unit package we have had for years and the whole team is fully motivated. We will take a few weeks off, recharge and come out fighting for the second half of this championship. We have experienced close title battles like this before and we are not giving up anything. The points difference between the top two in both championships is still very small, it will be an epic second half to this year and we are ready for it.”