Bottas: I’ve spoken to Lando and Checo to apologise 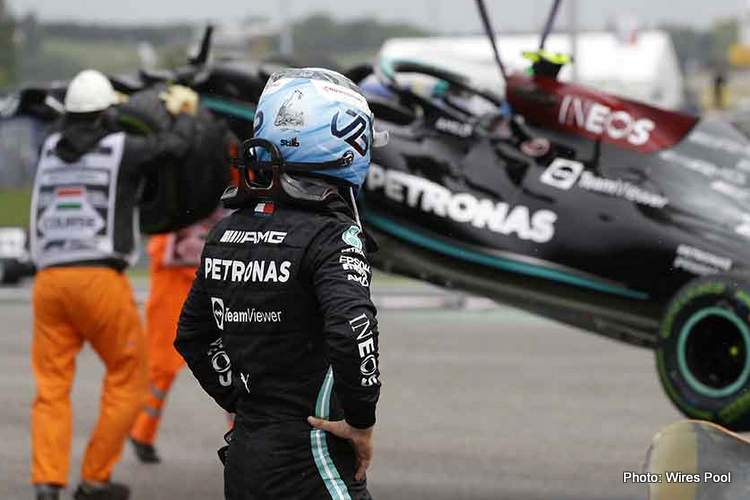 Valtteri Bottas apologised for this brain-fade on the opening lap of a dramatic 2021 Hungarian Grand Prix, but the question of whether the Finn is still the best driver for Mercedes beyond this season is now more firmly in the spotlight.

While many have called for his dismissal, even before his Turn 1 shenanigans, this site has steadfastly been Bottas’ supporter, going as far as bigging him up as the best wingman in F1 history. But that argument is fast eroding as he endures his worst first half of the season since Mercedes plucked him from Williams in 2017.

On Sunday at the start of the Hungaroring race, brain-fade turned into brake-fade which resulted in Bottas skittling into a posse of front runners after he was caught napping when the lights went out and made a “very poor start” according to his own team.

From second on the grid to fifth or sixth a hundred metres into the race, he got desperate and gambled on the brakes stopping him as he tried to make up for the cock-up with a move that was never on in those conditions.

In the Mercedes race report, Bottas said: “I’ve spoken to Lando and Checo to apologise, it was my bad today and sometimes you have to hold your hands up.”

Neglecting to apologise to Max Verstappen may be gamesmanship, but the Dutch driver deserved a “sorry” from Bottas because he too was clattered into (by Norris) as a result of the out of control Mercedes.

Bottas went on to explain his lapse: “I had a poor start with lots of wheelspin off the line, lost a couple of places and then into turn one, I was right on the gearbox of Lando and locked the wheels.

“I misjudged the braking point – it’s always difficult starting a race in those conditions, you’re always ‘guesstimating’ grip levels and today I got it wrong,” he added.

Andrew Shovlin did the right thing, on behalf of Bottas, by including Verstappen in his apology: “Valtteri had a very poor start and then his mistake at Turn 1 obviously ruined the day for Max, Sergio and Lando; we can only apologise for that, although it’s not much by way of consolation.

One could ask: What are the sighting laps for? Why not test the brake limits on his way to the grid, or even on the warm-up lap before the start?

It was the kind of mistake expected in Formula 3, but not at the highest level in one of the best F1 cars on the grid, from a driver with 167 Grand Prix starts on his resume.

Of course, the summer break will be packed with demands for Mercedes to ditch their number two driver, who does not appear t be getting any better the older and more experience he gets, in fact, he is getting worse.

His wet weather ‘skills’ have always been suspect, at wet Imola earlier this year he was battling with the Williams of George Russell when the two came together. Forget whose fault it was, what was he doing at that end of the field on a day teammate Lewis Hamilton blew him away in the wet conditions.

In Budapest yesterday, he received a slap on the wrist from the FIA for his shenanigans, as a five grid penalty is farcical considering the circumstances.

At Spa in 2012, Romain Grosjean ploughed over the field into Turn 1, taking out front-runners and got a race ban for a nutcase move on the first lap.

It could be argued that the Frenchman at the time, was accident-prone and no stranger to opening lap incidents while Bottas’ record is dissimilar and Sunday’s calamity was a genuine mistake.

Nevertheless, a five grid penalty for a driver in one of the best cars on the grid makes a mockery of the rules and smells of more inconsistency from the current era of race stewards.

Perhaps a one-race ban would be a tad too draconian but how about a pitlane or back of the grid start as punishment?

Whatever the case, Mercedes will find it increasingly difficult to justify holding on to Bottas’ not only because of this shunt but in the wake of the first half of this season in which he has failed to win a race and has 108 points to Hamilton’s 195.

Furthermore, as Hungary qualifying shows, Bottas is still shy three-tenths of a second or so on his teammate when the chips are down, and that on one of the shortest circuits on the calendar. Quick maths suggests he is 03s to 0.5s slower than his teammate, depending on the track; and there is little sign that the deficit will reduce anytime soon.

Reading between the lines, one could venture that 31-year-old Bottas knows (check the body language) he will not be with the World Champs next year and that a deal is done to have 23-year-old Russell in the car beyond 2021.

But this is only speculation as puppet-master Toto Wolff has his own agenda, with fingers in just about every F1 pie and a number of drivers under his spell.

However, Russell has more than made a case to slot alongside Hamilton at Mercedes, where the youngster would learn a great deal working with one of the greatest champions in F1 history, and prep him to lead the team when Lewis retires.

The only thing that might save Bottas and buy him more time is an absolutely stellar second half of the season, packed with wins and strong results, with NO MORE errors! Or Wolff, of course.

Final word to the Mercedes team boss: “A difficult start for Valtteri, he suffered wheelspin off the line and found himself sandwiched into the first corner and missed the braking point.

“A small mistake with large consequences and damage to several cars, and I’m sorry to McLaren and Red Bull – to lose out in an accident like that at the start of the race is tough to take,” added Wolff.