Ocon: Win is also thanks to Alonso with the fight he did 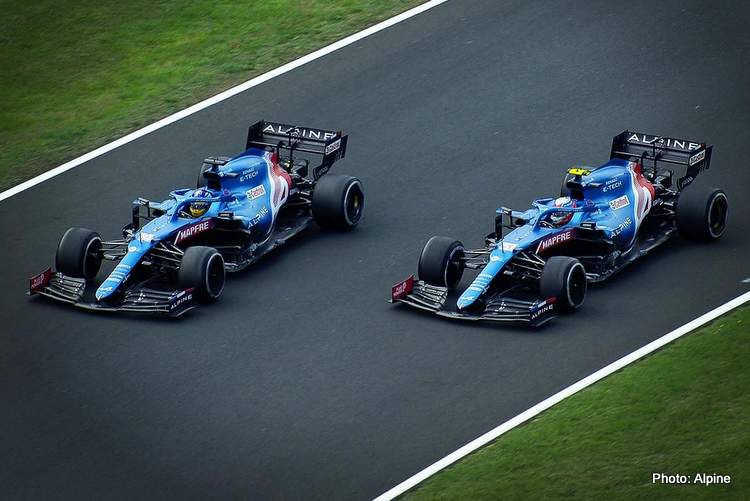 Esteban Ocon thanked Alpine teammate Fernando Alonso for helping him to an unexpected first Formula 1 win at the Hungarian Grand Prix on Sunday.

The first French winner in a French car with a French engine since Alain Prost with Renault in 1983, Ocon made a great start and then took the lead when the race was halted and re-started.

He held off Aston Martin’s Sebastian Vettel, a four-times world champion, while teammate Alonso held up Mercedes’ Lewis Hamilton for long enough to ensure the Briton could not overhaul the race leader late on.

“What a moment,” exclaimed Ocon, the 111th winner of a Formula 1 championship grand prix since the first in 1950, after parking his car in the wrong place in the excitement and running back down the pitlane to embrace his team.

The win was the first for the Renault-owned team under their rebranding as Alpine.

The Enstone-based outfit have raced previously as Toleman, Benetton, Renault and Lotus, who won with Kimi Raikkonen in Australia in 2013. They last triumphed under Renault ownership in Japan in 2008 with Alonso.

“Congrats to Fernando as well because I think the win is also thanks to him with the fight that he did,” added Ocon, who hugged the Spaniard, a double world champion who turned 40 last week.

Alonso, who began his comeback this year after two seasons out and was voted Driver of the Day by fans, also took his first Formula One win in Hungary with Renault in 2003.

“It has been awesome to work with Fernando. Since the beginning of the year… we are working together, we are pushing the team to try and improve and get closer to the pack in front,” said Ocon.

“Everyone told me a lot of things about Fernando before I came but everything is wrong. I can tell you he is a fantastic guy and I am really enjoying the collaboration we have together.”

Ocon said it would take a while for his surprise success to sink in, but he had achieved only part of a childhood dream — the rest being to win the F1 world championship. (Reporting by Alan Baldwin)