Verstappen: Again taken out by a Mercedes 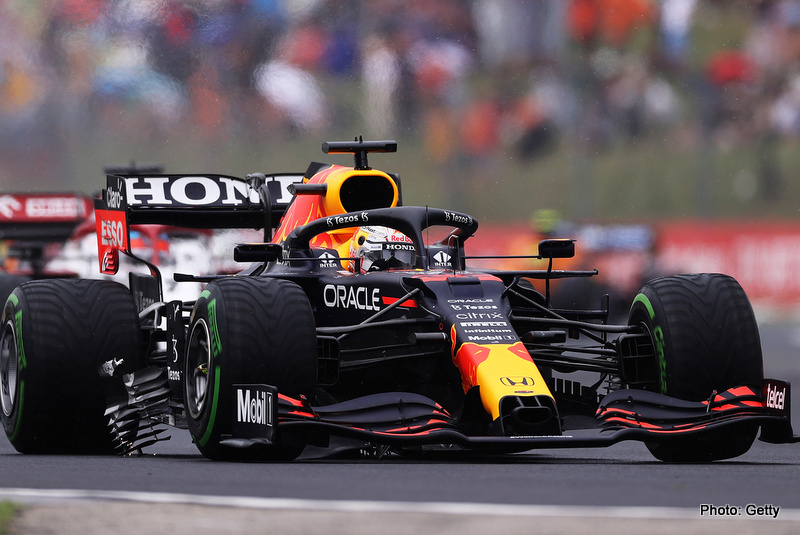 Max Verstappen salvaged a point but lost his championship lead to Mercedes rival Lewis Hamilton at the Hungarian Grand Prix on Sunday after a first lap collision left him with a badly damaged car.

The mayhem was triggered by a mistake made by Hamilton’s team mate Valtteri Bottas, who collected a five place grid penalty for the next grand prix.

The race had to be stopped and re-started for debris to be cleaned up.

“Again taken out by a Mercedes, so that’s not what you want,” said Verstappen, who retired on the opening lap of the previous British Grand Prix after a clash with seven times world champion Hamilton, who was deemed at fault by stewards.

Hamilton finished third after an error at the re-start dropped him from pole to last, but he ended up six points clear of the Dutch driver at the top of the standings going into the August break.

“I was missing the whole side of the car, the whole bargeboard area and the floor was damaged as well. It was almost impossible to drive,” said Verstappen, whose mechanics worked flat out to make repairs during a red flag period.

“I scored one point which is at least something.”

Verstappen, winner of five races so far this season to Hamilton’s four, said what had happened was disappointing but there was no need for a reset.

“I know that when we go again after the break I will be there again. I will try my very best and of course I hope my car is going to be competitive.

“It’s a lot of freak moments at the moment which cost us a lot of points.”

Red Bull team boss Christian Horner said it was “massively frustrating” but the one point could prove vital at the end of the year.

“The cost of the damage, it looks like an engine on Sergio’s car,” he said.