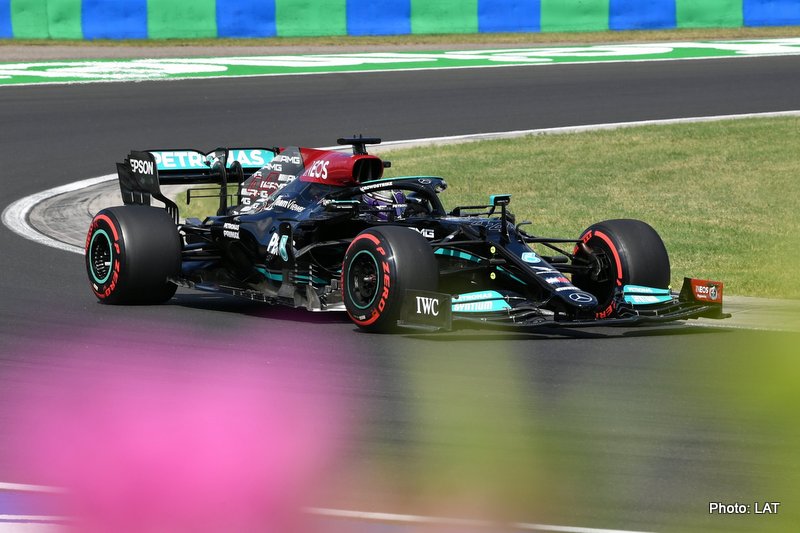 Lewis Hamilton was satisfied with a third-place finish at the Hungarian Grand Prix given the bizarre circumstances in which the race played out.

Having taken a dominant pole position on Saturday, Hamilton retained the lead at the start, but it was the carnage behind him that put everything into flux.

Valtteri Bottas was at fault, missing his braking point and colliding with Lando Norris, with Max Verstappen and Sergio Perez subsequently caught up in the crash.

Bottas, Norris and Perez all retired as the red flag was brought out, while Verstappen was able to continue from 13th despite the damage sustained.

However, a strategy error saw Hamilton fall to the back of the grid himself, with Mercedes not calling him in for slicks ahead of the restart, a choice that left him as the only driver on the starting grid with the other cars all starting from the pits.

The 36-year-old came into the pits a lap later to put on a set of slicks, before beginning his charge back towards the front of the field.

Hamilton did a good job in getting up to third, but was left somewhat rueful due to the mistake which cost him a great shot at victory.

“Firstly I want to congratulate Esteban, he’s been a shining star for such a long time now,” he told Sky Sports F1 after the race.

“It’s been a long time coming and I’m really happy for him. It’s also great to see Aston Martin up there – their best result so far, and I know there’s more to come.

“Today was definitely tough, we always make it difficult for ourselves. It’s crazy to think we were the only ones on the grid at the start but these things happen, and we learn from them. I gave it everything, and I had nothing left at the end.”

Asked about why he ended up as the only driver out on track for the restart, Hamilton replied: “I was telling the team how the track was through the lap but they said rain was coming when I got back in the car, so I thought they had other information. I then saw everyone diving in to the pits.

“We came in this weekend and didn’t know how it was going to go, and considering the circumstances today I’ll take it.”