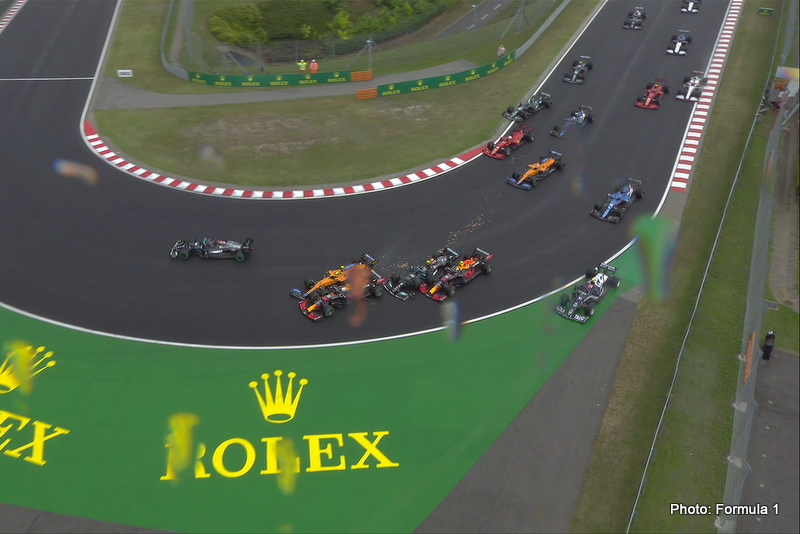 Valtteri Bottas will receive a five-place grid penalty at the Belgian Grand Prix for his role in an opening lap crash in Hungary on Sunday.

The Finn got a slow start from P2 on the grid, with Max Verstappen, Sergio Perez and Lando Norris all getting the jump on him.

Heading into Turn 1, Bottas was too late on the brakes and careered into Norris, who in turn collided with Verstappen, while the Mercedes man went on to hit Perez.

As a result the race was red flagged, with Bottas, Norris and Perez forced to retire and Verstappen ending up in 13th.

Verstappen continued despite his damage and was able to score a point in 10th position.

Norris was clearly frustrated by the incident, describing the actions of Bottas as stupid while speaking to Sky Sports F1.

“Lap one, I don’t know why that has to happen,” he said. “Why risk doing those kind of stupid things? But there’s nothing I can do so not a lot to say.”

Perez also blamed the Finn for causing the incident: “I think basically Bottas lost the car in the beginning. I thought it was Lando but it’s that Bottas just made a big mistake and took everyone out of the race. It’s a big shame.”

With Mercedes set to make a decision on Bottas’ future ahead of the Belgian Grand Prix, it was hardly an ideal result and he admitted fault after the race.

“I had a poor start, had wheelspin off the line and lost places,” he said.

“Braking into the first corner, I was right in the gearbox of Lando and just locked the wheels. Probably, I didn’t calculate the braking point quite right and hit him, then it was a mess.

“It was a great starting point for the race and for me, it was a shame.”