Red Bull Pitwall to Max: Overtake Hamilton if you need to 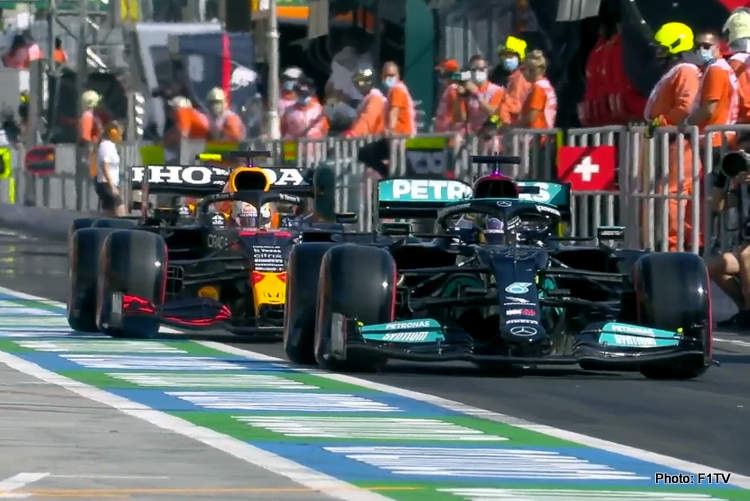 Max Verstappen twice ignored the Red Bull pitwall to overtake Lewis Hamilton’s Mercedes during qualifying for the 2021 Hungarian Grand Prix, which may have cost him a top spot start for Sunday’s race at Hungaroring.

After Hamilton delivered a scintillating lap with his first effort in Q3, from then on, Verstappen was under pressure after his below-par first shot, leaving him all to do in his final attempt but compromised himself in choosing to sit it out behind the Mercedes on a slow out lap for his own final lap.

As the pair departed the pitlane nose-to-tail, Verstappen tucked behind Hamilton, his Red Bull engineer said over the radio: “Overtake Hamilton if you need to.”

Then, halfway around, with the clock ticking down with 30 seconds to go the engineer told Verstappen: “Get yourself ahead into the final turn” and added, “We just need to go.”

Verstappen did not and thus was denied pole position on a day most expected he had the firepower to beat Hamilton, but that was not the case as the Mercedes driver racked up his 101st pole position start in F1 while the Red Bull driver will line-up third, behind his nemesis.

Afterwards, Verstappen was clearly unhappy with how things turned out and slammed reporters in the post-qualifying press conference for questioning what he had planned for his rival on the first lap of tomorrow’s race.

“Can we just already stop about this? We had so many fucking questions about this, it’s just ridiculous. The whole of Thursday we’ve been asked this stupid question, so stop. We’re racers, we will race hard and fair,” he replied angrily.

Before adding: “The whole weekend so far we have been a bit behind and it showed again in qualifying. Of course not what we wanted but nevertheless we’re still there in P3 and we’ll see what we can do. But so far not what I want.”

What may play in his favour is that Verstappen will start the race on the soft tyre, while both Mercs are on the medium Pirelli: “It’s going to be different. The grip was quite a bit higher on these tyres, we will find out tomorrow.

“It’s going to be really hot so naturally, a softer tyre will not last as long as a medium, but nevertheless, it will give us a good opportunity off the line.

“My lap time on the medium would have really been on the edge for the top ten so that’s why we decided to finish the lap,” explained the Dutch driver.

In the Red Bull team qualifying report, he added: “I went a bit backwards on my Q3 lap compared to Q2 and I just didn’t have the same grip for some reason. I don’t know if it was track or tyre related but the balance was a bit off to push everywhere and around here the corners all follow really quickly so if you don’t feel good in one corner, the next one won’t be great either.

“I lost a bit of lap time on the final run but even with a faster out lap and a slightly better balance, I don’t think we would have been on pole. P3 isn’t where we want to be and we cannot be happy with that but nevertheless, we are still up there with Checo next to me so we will see what we can do in the race.

“We will also find out if starting on the soft is a good strategy as it’s going to be really hot. The softer tyre won’t last as long as the medium but maybe it will help us off the line. The start around here is very important so we will give it a good go and fight to get the best out of the race,” predicted the 23-year-old.

In the race on Sunday, Verstappen will be defending a narrow eight points lead over Hamilton at a venue where he has finished second twice and yet to score a win. (Additional reporting by Agnes Carlier)

Cat and mouse against the clock in Q3 ⏳#HungarianGP 🇭🇺 #F1 pic.twitter.com/oUGnfnYiBZ