Is it time for Mick Schumacher to ditch Haas? 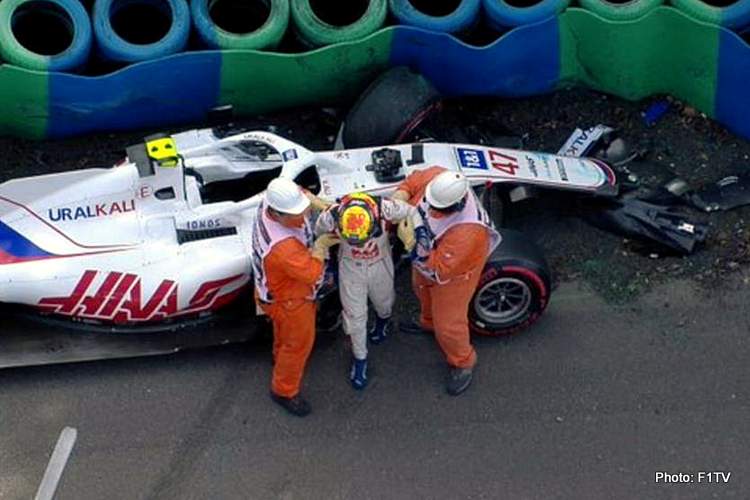 Haas Formula 1 rookie Mick Schumacher was lucky to walk away relatively unscathed after yet another crash, this time during the third free practice session of the Hungarian Grand Prix.

With 15-minutes left in the midday session at Hungaroring, Schumacher lost control of the evil handling Haas, it slithered at speed before crashing at 30G sideway’s into the wall.

Winded, Schumacher reported from the cockpit immediately after: “I’m okay. Really sorry for that, I know what it means. Sorry.”

Meaning he is unlikely to qualify this afternoon, suffering a similar plight as he did when he wacked the barriers during FP3 at Monaco in May.

It is well known that the Haas VF-21 is basically the same car they rolled out at the start of the 2020 F1 season, and was not much different to the VF-19 which veterans Romain Grosjean and Kevin Magnussen described it as the worst car they had ever driven.

Now with two rookies at the wheel, they have struggled to keep the car heading in the right direction. Nikita Mazepin has a site dedicated to his crashes in the Haas, while Schumacher has also struggled to despite his pedigree and the fact he is reigning Formula 2 champion.

However, the writing has been on the wall since Mick’s deal was announced. It is hard to fathom why Ferrari, who manage the son of F1 legend Michael Schumacher, decided to place Schumi III in a car that has been described as a “shitbox” and a dangerous one at that.

Former F1 chief Bernie Ecclestone aired his reservations when he told Sport 1: “I feel a little sorry for Mick, because he has great qualities with which he could showcase better than with the people [Haas] he is with now. I’m not sure he can learn that much there. He won’t have anyone there who can teach him much. He is on his own.”

Options for Mick, before this season was a placement at Alfa Romeo, where underperforming Antonio Giovinazzi and over the hill Kimi Raikkonen trundle around in each weekend.

The Haas alternative – which Ferrari under Mattia Binotto opted for which, combined with the Mazepin-millions, saved the team from bankruptcy – is clearly a mistake by the Italian team and young Schumacher’s management team which few seem keen to admit.

They should have known better and canvassed advice rather or done some due diligence than pluck Mick into F1 at all costs.

Ecclestone ventured: “The perfect team for Mick would be a team like Red Bull, who have the skills to win races and the people who can support him properly. His performance in Formula 2 was great, but it won’t be so easy to replicate with his current team.”

“He’s got a big problem already. He’s got the burden of a big name he has to wear. People will say: He’s not as good as his father. Now we will see that he has an even bigger handicap with the car he drives,” added Bernie, and that was before this latest shunt.

Like him or not, Ecclestone knows a thing are two about the sport he ruled over for decades and his association with the Schumachers runs deep, after all, Michael’s exploits rocketed the sport to the top of the global sports charts.

Hence Mick is F1 royalty, who has proven that he is a handy racing driver in his climb to the top. He is in F1 on merit and the beleaguered American team, under Guenther Steiner, is inappropriate for such an important talent.

With Yuki Tsunoda underperforming at AlphaTauri, the rookie looking like another year in F2 would have served him well, Red Bull would be wise to consider Ecclestone’s suggestion and sign Mick as a teammate to Pierre Gasly.

Team boss Franz Tost has helped develop a slew of young drivers for the Red Bull A-Team, Sebastian Vettel Daniel Ricciardo and Max Verstappen spring to mind. Steiner has not and, while his management style may be good for Netflix, it is doing the two rookies he is charged no favours.

It is always discomforting to talk about injury and death when it comes to motorsport but it is a reality that too many skirt until of course something serious or deadly happens.

Is there a F1 fan out there that does not shudder at the thought of what could happen to these two kids in those Haas “shitboxes” when their luck decides to go AWOL?

Thankfully, the @HaasF1Team driver has been given the all-clear by the medical centre #HungarianGP 🇭🇺 #F1 pic.twitter.com/qm1MupdB2N