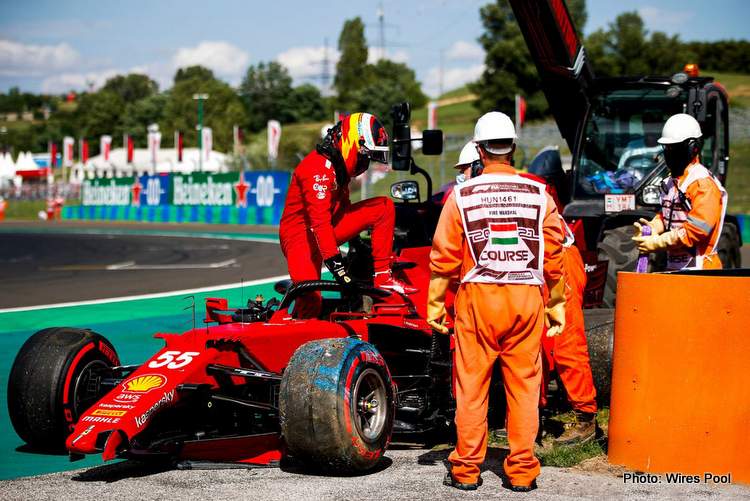 As often reported on this site, Ferrari have no clue what car will turn up for any given race weekend session, today’s qualifying for the 2021 Hungarian Grand Prix again provided proof of that.

The Reds surprised all with handy pace during FP3 with Carlos Sainz and Charles Leclerc ending the session fourth and fifth respectively, but at the end of the day they were scratching their heads as the best they had was could muster was 7th and a car in the wall.

Leclerc, the one with the uncrumpled, car reported: “It was a bit disappointing, as we expected a little more than a P7. The high temperatures were not as much of a challenge as the wind was today. As it picked up in Q2, we started struggling with our rears and couldn’t maximize our potential.

“Tomorrow is when we score points though. Our race pace looks strong so I am confident. It is not an easy track to overtake on, so a good start will be essential,” ventured Leclerc.

In the sister car, Sainz looked feisty until Q2, when he stomped on the loud pedal tad too early into the final turn, lost control as the rear snapped away sending the SF21 slithering into the barriers sideways, with a fairly big thud, to end his session on the spot.

Explaining another disappointing afternoon, Sainz said: “This one is tough to take. I’m rarely involved in this type of incident and it hurts. After a very strong run in Q1, going off in Q2 is the opposite of ideal.

“I was closing the lap, not pushing to the absolute limit, as it was only the first run of Q2 and unfortunately I was caught out by a big gust of wind, later confirmed on the data. I don’t want to use it as an excuse, it was a mistake on track and I apologise to the entire team. They did a great job last night and the car today felt quite good.

“Unfortunately, this is one of the worst possible tracks to have a bad qualifying because overtaking is tough here. I’ll do my best to recover and try to score as many points as possible tomorrow,” added the Spaniard.

Ferrari racing director Laurent Mekies said of their afternoon at Hungaroring: “There’s no point denying that it’s disappointing that today’s result did not live up to our expectations.

“Given the times in Q3, we could have reasonably aspired to a place on the second row, but when the gaps are so small, just the slightest thing is enough to gain or lose several places. Sometimes that has worked in our favour, but not this afternoon.

“On top of that, we are paying a high price for Carlos not making it out of Q2, because it was clear that he also had the potential to fight for fourth place.

“Now we are concentrating on preparing for the race, which will be a tough test for the drivers and the cars, especially because of the expected high temperatures.

“Yesterday [Saturday] our long-run performance wasn’t bad, but we know how difficult it is to make up places on this track. Strategy and tyre management will be the key factors,” added Mekies.

Ferrari have not won a Grand Prix since Leclerc triumphed at the 2019 Singapore Grand Prix.