Tsunoda: It’s my fault and I have to learn from it 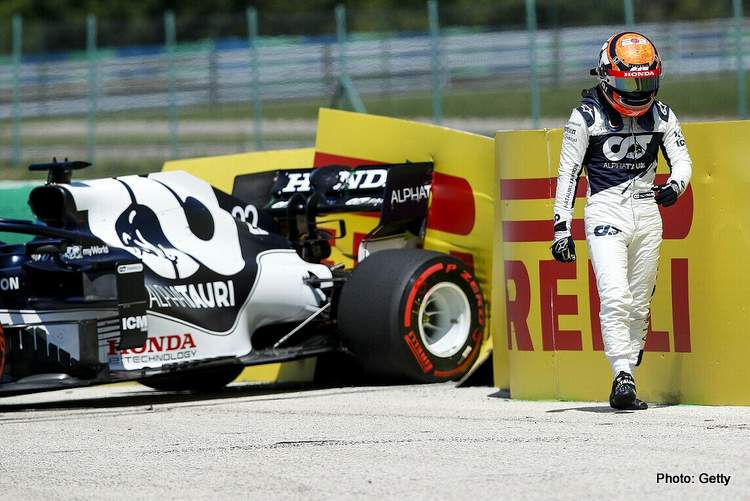 Yuki Tsunoda’s shares took another nosedive after the AlphaTauri rookie crashed in FP1 for the Hungarian Grand Prix, giving his crew a monumental task to get his car ready for FP2, which they only just managed to do.

During the one-hour morning session at Hungaroring on Friday, the accident-prone rookie messed it up in Turn 4, his AlphaTauri rear-ending into the barriers and triggering a red flag period which denied the rookie valuable track time and compromising his weekend in the process.

“Just two corners I was losing a lot in high speed and tried to improve myself and went into the wall. Still, I shouldn’t do that, and almost already one-and-a-half, almost one session completely gone. Have to learn from it.”

The prang meant a speedy repair job by the AlphaTauri mechanics and enabled him to do one timed lap at the very end of the one-hour FP2 session, which was good enough for 17th on the timesheets.

“I think it was all my fault, and mechanics did a really good job. Still, really helpful for me and for the engineers to take the data, even one lap, so yes, I think it was really hard work for the mechanics and really appreciate them.”

Rain is being forecasted over Budapest in coming days, which the Japanese driver acknowledged in his team report: “Conditions could change, I don’t know what it’s going to be but I have to maximise my preparation and to the time I lose I have to gain with preparation or something like that.

In the sister car, Pierre Gasly had a better day, unlike his less-experienced teammate, the Frenchman kept it on the tar to end the day sixth fastest.

He reported afterwards: “I’m very pleased with today, particularly after Silverstone where we struggled a bit. It’s good to see that we’ve got the performance back again.

“The car felt good even in these really hot conditions, so we’ll see how we do tomorrow. The Alpine car is looking very fast this weekend so we’ll have to work hard tonight to try and get them in Qualifying.

“I think it might rain overnight, and also in the morning, so we may have different track conditions tomorrow. The pace of the car seems to be good though, so we can go into tomorrow with confidence<” added Gasly.